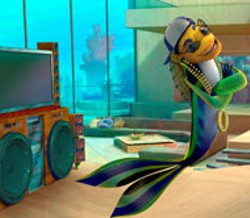 SHARK TALE Forget the Finding Nemo comparisons: On its own, Shark Tale still only qualifies as so much cinematic chum. Call me old-school, but when it comes to animated features, I prefer the lyrical classicism of Beauty and the Beast and Pinocchio to the hipster stylings of Shrek. But current tastes dictate that we'll be seeing less of the former and more of the latter; that's acceptable as long as the films are fresh and funny, yet if Shark Tale is any indication, this sub-genre is already starting to run aground. Will Smith handles the largest role as Oscar, a hip-hopping fish whose dreams of success are realized once he's mistaken for a courageous shark-slayer. He's aided in his efforts at duplicity by Lenny (Jack Black), an out-of-the-closet shark running away from a mob family that doesn't accept his alternative lifestyle. Shark Tale is all about getting jiggy with pop culture references, with much of the weak humor coming from riffs on famous movies (Jerry Maguire, A Few Good Men), famous products (Coral-Cola, Kelpy Kreme) and famous songs ("Car Wash" becomes the anthem at the Whale Wash). Even Katie Couric is reinvented as fish reporter Katie Current, though amazingly, today's two biggest media whores aren't on hand as, say, Larry King Mackerel and Stingray Leno. There's little novelty in hearing Robert De Niro, Martin Scorsese and other familiar Italian-Americans as the voices of the maritime mobsters, and the animated characters simply aren't appealing from a visual standpoint. A few clever sight gags pop up now and then (such as the sushi restaurant that understandably has no customers), but for the most part, this one smelled fishy from the start.

CELLULAR After being kidnapped for reasons unknown, a teacher (Kim Basinger) is able to jerry-rig a busted telephone so that it's able to make one random call. She ends up dialing the cell phone number of an aimless kid (Chris Evans) who believes her pleas for help; after a failed attempt to notify the authorities, he decides he's the woman's only hope, though a conscientious police officer (William H. Macy) soon realizes something's up and begins his own investigation. This nifty thriller employs a full-speed-ahead approach that suits the material at hand, even if it never quite conceals the sheer improbability of the piece.

THE FORGOTTEN Slumming Julianne Moore stars as a woman who, after mourning the death of her son for 14 months, is suddenly told that she never had a child and that he only existed within her own delusional mind. What begins as an unsettling psychological thriller eventually morphs into a sci-fi curio that becomes less intriguing as it plays out. Certainly, this was one way to go, but scripter Gerald DiPego (whose past exercises in gloppy metaphysics include Phenomenon and Angel Eyes) never plays fair, changing the rules based squarely on the demands of his storyline. Director Joseph Ruben manages to stage some genuinely creepy moments here and there, but they're squandered in a movie that ultimately drowns itself in an ocean of inconsistency.

GOING UPRIVER: THE LONG WAR OF JOHN KERRY This compelling documentary leaves no doubt that John Kerry is clearly more honorable, more courageous and more decisive than the criminal currently occupying the White House, detailing how he went from being a Vietnam War hero to a morally conscientious protestor of the conflict. Voters who've been duped by those preposterous Swift Boat ads concocted by weaselly John O'Neill (seen here in a vintage clip getting one-upped by Kerry on The Dick Cavett Show) may be interested to learn that Richard Nixon's office had formally tapped O'Neill to run a smear campaign against Kerry; indeed, the film's most sobering aspect is its ability to subtly highlight all the uncanny -- and frightening -- parallels between then and now. Yet while its shelf life as a political tool may be limited, the movie will continue to resonate for its moving look at the struggles of those returning vets who had to come to terms with their own personal beliefs.

LADDER 49 It was probably inevitable -- perhaps even desirable -- for a post-9/11 movie to be made that celebrated firemen, but did it have to be as dull as this one? If there's an original moment in this tedious (if earnest) drama, I must have been rubbing my eyes for a nanosecond and missed it; instead, director Jay Russell and writer Lewis Colick have managed to cram just about every overused melodramatic device into this one picture. In an effort to elevate these men (played by, among others, Joaquin Phoenix and John Travolta) to the level of heroes, Colick has stripped them of most traits, in effect leaving us with a roomful of cardboard characters in a threadbare film so desperate for material that it actually includes a karaoke scene and at least two musical montages.