Finding Nemo: Something fishy in theaters | Reviews | Creative Loafing Charlotte
Switch to the mobile version of this page.

Finding Nemo: Something fishy in theaters 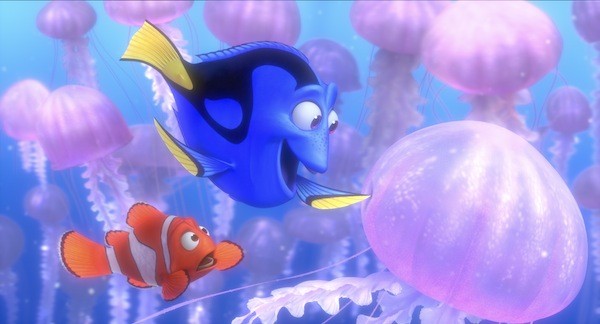 For approximately a quarter-century, we've been witnessing a remarkable renaissance in the animation field, blessed with a number of toon flicks that have constantly tried to up the ante in regard to more complex storylines, richer character development and, of course, revolutionary graphics: Who Framed Roger Rabbit, Beauty and the Beast, Toy Story, Chicken Run and Spirited Away all managed to introduce viewers to something they hadn't quite experienced before. Disney/Pixar's Oscar-winning Finding Nemo, which has been theatrically re-released in 3-D on the eve of its Blu-ray debut, comes close to such touchstone status only in one respect: Its animation is truly stunning, awash (pun intended) in a dazzling array of colors and creating the impression of a living, breathing sea.

As for the storyline, it's a familiar one to anybody who's ever sat through earlier Disney films (both animated and live-action), employing elements previously seen in everything from Bambi (loss of a parent) to Pinocchio (accepting responsibility) to The Incredible Journey (braving impossible odds to be reunited with a loved one). Albert Brooks provides the voice for Marlin, a timid clown fish and single parent who's raising his young son Nemo (Alexander Gould) to the best of his abilities. Despite Marlin's suffocating attention, Nemo still manages to get captured by a deep-sea diver and eventually deposited in an aquarium that rests in a dentist's office in Sydney, Australia. Determined not to lose his son, Marlin begins a long, arduous rescue mission across the sea, teaming up with an overly exuberant fish (Ellen DeGeneres) suffering from short-term memory loss.

For all its visual splendor and adult-oriented gags (nods to Psycho, Jaws and The Shining are included), Finding Nemo falls short of most Pixar films primarily because many of its characters lack depth. Unlike, say, Toy Story, where each player is beautifully delineated, too many here seem more like "types" than unique individuals. The aquarium dwellers, which include among their number a sensible starfish (Allison Janney) and a blowhard blowfish (Brad Garrett), work well together but never shine on their own - certainly, their non sequiturs aren't nearly as uproarious as those tossed off by Hamm, Mr. Potato Head, et al. What's more, two specific characters - Dory, the blue tang voiced by DeGeneres, and Crush, a mellow surfer-dude turtle voiced by director Andrew Stanton - have always been as likely to alienate viewers as envelop them (Dory with her scatterbrained routine and Crush with his Bill-and-Ted-speak). Still, it's downright curmudgeonly to remain focused on the negatives when the rest of the picture is saturated with invention and wit. With Pixar's hot streak ending with Cars 2, this critical and commercial smash serves as a reminder that things have generally gone swimmingly for a company that continues to set the high watermark in animated entertainment.

Finding Nemo is not showing in any theaters in the area.