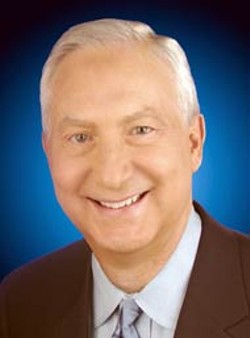 Like tax time in April, rumors of Bill Walker retiring from his anchor job at WSOC-TV were guaranteed to pop up, this time starting a few months ago. Usually, the rumors were the wishful thinking of competing stations and a by-product of his long vacations, earned after 37 years at the same company. But this time, the rumor was true. There was no skullduggery involved, as one rumor had hinted. "It was 37 years, and was as simple as that. The time just seemed right, and it was time to enjoy life a bit," Walker says.

So as the dust settles after Walker's retirement announcement, and the tributes continue as he prepares to leave the airwaves in June, make no mistake, my friends: the TV stations that have lagged behind channel 9 for 15 years in the news ratings in Charlotte are dancing a jig.

That's because many in the news game here view Walker's retirement as the first time that closed door's been cracked in years, and they want to take advantage of the opportunity when the market's top-rated anchorman takes his leave. But they also know that Walker's departure doesn't necessarily mean WSOC-TV is headed for a ratings dive.

"You won't see dramatic change after the next ratings book," says Stu Powell, general manager of WCNC-TV. "I don't have the foggiest as to what might happen, but it won't be the same after he leaves. Certainly, a big factor in their ratings is their consistency, and having a solid news team with longevity is a part of that."

As for his station, "the Walker Factor" will be something they'll be thinking about, but Powell plans no big changes: "we're going to keep doing what we're doing, and hope that people sample what we do, and like it."

Over at WBTV, general manager Mary McMillan told me, "We're always strategic, but are we going to do a 180 because of this? No. We're going to stick to our plan and work that plan. However, when you do have a major change like this, it does provide you some opportunity for viewers sampling us. We just have to earn those viewers. He's been a highly respected mainstay for years and TV is a personal medium. You develop a relationship with people (on-air)," she said.

Having been around the TV news block myself, I can tell you there's no business model for replacing a popular anchorperson with longevity, even when you know that time is coming.

TV stations in similar situations do one of several things. Plan A is to go outside the market for a fresh face, do extensive focus group testing to see how that person would play with hometown viewers, and often throw money at the problem, paying well for a quality talent.

Plan B is to promote someone from within who already tests well with viewers and does well in the newscasts he or she anchors. For Channel 9, that person right now would seem to be Vince Coakley, who is a weeknight anchor and has been with the station since 1992. Genial and laidback, his style is in sync with what a Channel 9 viewer is used to seeing each night.

Plan C is a bit risky, but would involve rotating a lot of different faces into different time slots and focusing more on content and live reports than the people anchoring the show. That will not happen here.

Walker himself would be the last person to predict what might happen next due to his retirement, but he downplays the impact of a single anchorperson as the key to good ratings. "On-air chemistry is much discussed and little understood, but I think it's really so many other things: vision, teamwork, content, and consistency."

When he looks back at 37 years of news in Charlotte, Walker sees technology as the major sea change: "It's mind-boggling. In terms of what we do and how we do it, it used to be film, and then it was tape, and now it's tape to live. The technology actually put new demands on what we do. Our deadline is always now."

Walker also thinks TV news still hasn't quite figured out how to integrate the Internet with what they do, "and they will have to," he says.

So as competitors ponder how they might capitalize on the end of an era at WSOC-TV, Walker plans some world travel with wife Eva May (Italy is a favorite), and colleagues' sentiments are as genuine as the gentlemen himself. He's a nice guy in a not-always-so-nice business.

Channel 9 news director Robin Whitmeyer summed it up for herself and loyal viewers: "I'm happy for his family, but will miss seeing him every day."