Four state lawmakers from Mecklenburg County are the new order

By Michael A. Cooper Jr. 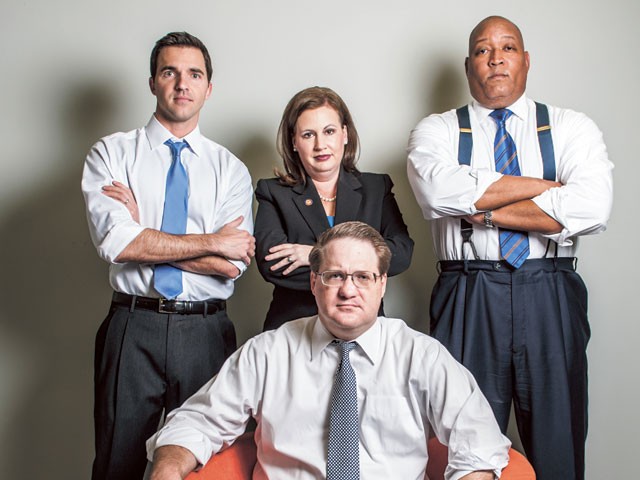 Twitter exploded the February morning a 32-year-old state senator arrived at the General Assembly on a snow day. "I think I'm the only legislator in the building. Let me take care of a few things," posted Jeff Jackson, who later tweeted about expanding Medicaid and raising teacher pay. "This is going to be like Night at the Museum, only at the end we'll have a stronger middle class."

Jackson's hashtag #JustOneLegislator went viral, and the next day he appeared on MSNBC; in a battleground state divided by protestors on the left and think-tank scholars on the right, it was a glimpse of leadership, even if it was only fantasy.

Instead of debating the issues, last year's U.S. Senate race in North Carolina saw more than $100 million spent on personal attacks. Now, a new generation of leaders must face the challenge of restoring faith in public service at the lowest point in our politics. Four people from Mecklenburg are well-positioned to meet that challenge: Jackson and Joel Ford serve in the state Senate, while the other two, Tricia Cotham and Charles Jeter, are members of the North Carolina House. Young and optimistic, they are what Thomas Jefferson envisioned as America's "natural aristocracy" grounded "in virtue and talents." 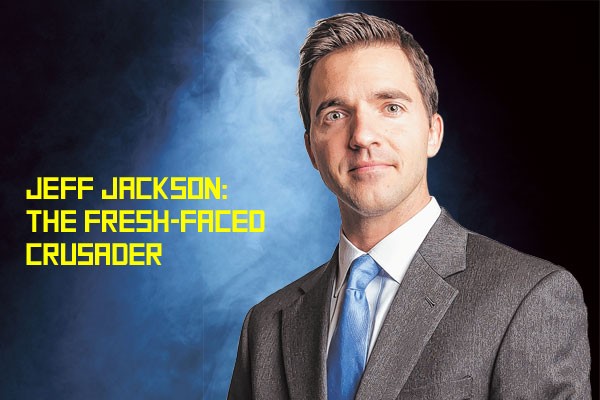 Currently a captain in the Army National Guard, Jackson joined after 9/11 and served a tour at a remote outpost in Afghanistan, where poppy fields grew along the fence. It was his job to walk into the village square with an interpreter and wait for villagers to approach.

A native of Chapel Hill, Jackson ended up in Charlotte after law school working as an assistant district attorney in nearby Gaston County. Then Patrick Cannon's downfall changed his life. State Sen. Dan Clodfelter was appointed mayor, and living in the district nearby, Jackson sat down with his wife Marisa and stepson Haden and "decided it was a once-in-a-lifetime opportunity."

Securing the list of Democrats voting in the special election, Jackson spent hours in their living room telling his story. Ten years after voting for the first time, Jeff Jackson now represents Pineville, Uptown Charlotte and Plaza Midwood as a state senator.

Since getting elected, Jackson has knocked on more than 1,000 doors and is carving a niche as a pro-business Democrat committed to reform.

"I don't see how you can vote on it in good conscience," Jackson chided his colleagues on the floor after last year's budget was placed on his desk late one morning and senators were asked to vote that afternoon. "You can't possibly know what's in here." Standing in the back of senate chambers in a dark gray suit and skinny tie, Jackson admitted that Democrats also abused the legislative process while in the majority, but asked Republicans to rise above revenge because the pendulum will swing back. 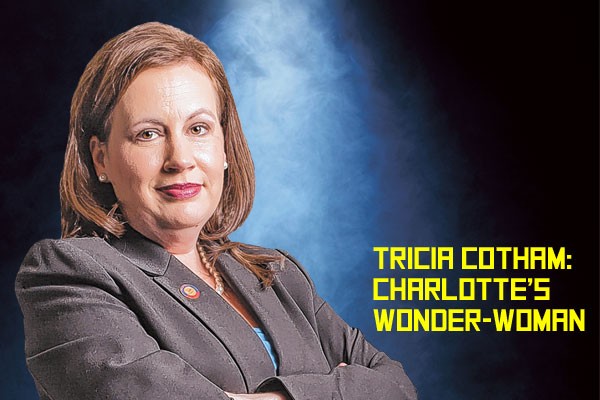 Among these four Mecklenburg legislators, Tricia Cotham had the most experience when she first ran. "I was the dork kid," says Cotham, daughter of county commissioner Pat Cotham. "While other girls played with Barbie, I was coloring in states on an electoral map. People always thought it was my parents making me do that. It wasn't."

Ten-year-old Cotham spent Saturdays at Democratic headquarters or canvassing on the west side. "Not in the cool crowd," she says, she wore suits to high school and was booed by fellow students when she spoke out in favor of busing; some of whom egged her house.

Undeterred, Cotham majored in history at UNC-Charlotte and became a teacher then assistant principal. When the state Speaker of the House was indicted, a group of female educators told her, "Jim Black is going to jail, and you need to take his seat."

The next day she announced her candidacy. The youngest member of the General Assembly when elected, the 28-year-old Cotham cut out photos of the legislators, glued them to a poster board and memorized the names.

Joining Twitter in 2008, Cotham caused a stir when she used her pink Blackberry on the state House floor. "People thought I was texting or not paying attention," says Cotham, who was live-tweeting the meeting. "But I was paying the closest attention."

Cotham is a pragmatist behind the scenes who tries "to make bad bills better and kill bills that are awful." Though a staunch defender of public education, she tried to compromise on charter schools and was added to a conference committee last year to work out a final bill. But she realized it had too many flaws, from lack of LGBT protections to allowing some employees to keep their salaries a secret. "I became Olivia Pope in my office," says Cotham, who spent the day researching and calling experts. "I realized it could be dirty and the public has a right to know."

According to historian Arthur Schlesinger Jr., the key to leadership is to "possess not only a personal vision but the capacity to communicate that vision to their age." With over 21,000 tweets, Cotham uses social media to explain the legislative process to her followers, increasing transparency and providing her followers with access to the life and work of public official in a manner unthinkable only a decade ago. After the governor's State of the State address in January, she even posted a selfie with Jackson and Joel Ford.

THE GIANT MODERATE OF THE WEST SIDE 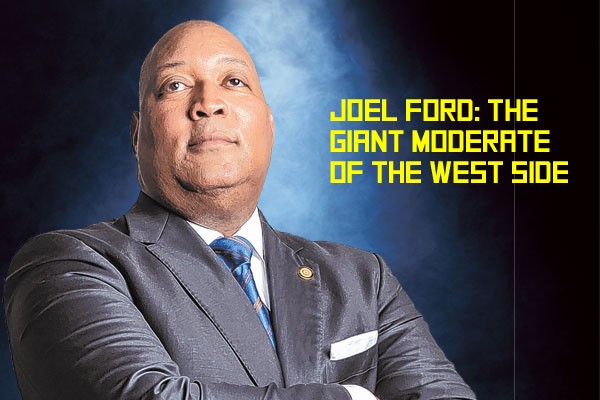 At 6'3" people naturally look to Joel Ford. Dressed in colorful bow-ties and a pocket square, making Ford the most stylish member of the state legislature. Raised by a single mother in Belmont, Ford lived in public housing and underachieved in school until arriving at North Carolina A&T, where the images of successful and intelligent African Americans inspired him.

Between jobs, Ford moved back to the Charlotte area from Atlanta in 2000 to care for his ailing grandmother, and spent New Year's Eve alone typing up the business plan for a waste management company. "Knee deep in picking up garbage and trying to make payroll," the serial entrepreneur didn't get interested in politics until the Mecklenburg County Commission entered into a disposal agreement with a competitor for substantially cheaper. "They didn't know the impact of their decisions on small businesses," he says.

After stints chairing the Charlotte Housing Authority and the Mecklenburg Democratic Party and running the campaigns of state Sen. Charlie Dannelly, Ford rose through the local ranks and onto Raleigh in 2012 when Dannelly retired and endorsed Ford.

Ideologically, Ford is in the middle of the chamber, a "center-right Democrat" who recently finished a book about Ben Carson, but considers Barack Obama his favorite president. When Republicans introduced a Voter ID bill in 2013, rather than flatly demean the idea as racist, Ford offered his own bill that guaranteed an ID at the polling place if the prospective voter didn't have one.

Representing a safe Democratic district encompassing all of Charlotte's west side, Ford's centrism is out of principle instead of fear, but his votes for fracking and a senate bill allowing magistrates to recuse themselves from marrying gay couples has angered North Carolina's progressive community. "We need to be sensitive to religious freedom and respecting individual rights, and that has proven to be difficult because of people who look for tolerance while they themselves are intolerant," says Ford, who opposed Amendment One, but wants to strike a balance during this social change. "One of my colleagues said, 'Joel your problem is you saw the bill as a tool, and others saw it as a weapon, and you're not going to change their mind.'" 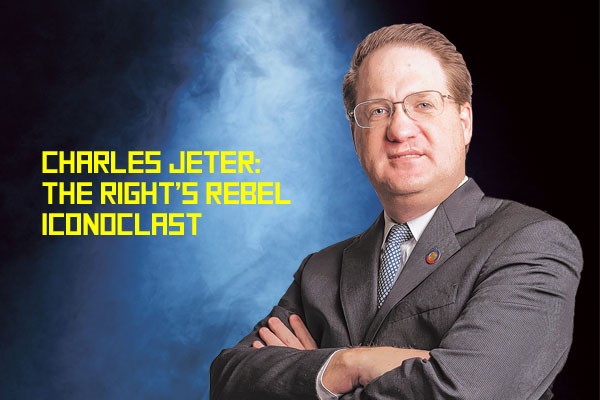 A native of South Carolina, Charles Jeter was born with cleft palate, making him different from the start. "I'm the person I am today because of a birth defect," says Jeter, who underwent 20 operations before he turned 18 and used self-deprecation as a childhood defense. "I learned to tell the joke about me before you could."

Son of an administrator in Ronald Reagan's Environmental Protection Agency, Jeter attended dinner at the White House at the age of 8. But as he got older, he lost interest in the family business, partied at Wofford College instead of joining the college republicans, and after graduation moved to Los Angeles to play the drums.

When stardom crashed, he returned home, worked sales and then formed an ill-fated racing company that landed him in Huntersville; the family now runs a successful shipping company. In summer 2005, while reading the newspaper Jeter complained to his wife about local commissioners raising taxes. "Shut up or do something about it," she responded. The next day, Jeter filed for office.

After four terms on the Huntersville Town Commission, redistricting created House District 92 along the western edge of Mecklenburg. Thom Tillis recruited Jeter, and despite running in a district President Obama carried by 11 points, he won. "I'm honest and try to do what is right," he says. "When I disagree with my party, I will vote that way."

That happened in 2013, when Jeter was the only House Republican to vote against a "motorcycle vagina" bill restricting access to abortion. Jeter turned down an interview request from The Rachel Maddow Show. "They wanted me to be their cookie-cutter moderate Republican," says Jeter, who has libertarian social views but is also conference chairman for House Republicans.

Last August, when Jackson tweeted "Gerrymandering is a moral issue," Jeter replied, "On that point I agree," and in February the two of them introduced bipartisan legislation to create an independent redistricting commission.

THE CHALLENGE OF THE NEW ORDER

As the General Assembly attempts to take over the City of Greensboro (by redrawing city council districts) and the state's public university system (by appointing unqualified campaign donors to run UNC's board of governors), only adding to the controversy of the last two years, Jackson, Cotham, Jeter and Ford face the responsibility of offering a policy middle ground, between the angriest voices of each caucus. "There is a path to making incremental progress," says Jackson. "It involves making substantive contributions to bills and debates, doing the hard work and giving other people the credit, and treating everyone with respect, no matter what your differences might be."

Ford wants to solve problems rather than throw bombs. "Even if we take back the governor's mansion, the budget and most public policy will run through the legislature," he says. "So Democrats have to appeal to the new districts to be successful or we'll forever be the minority party in this state."

And Jeter, now a member of the House leadership in only his second term, understands that to remain in power, the GOP must represent the entire state. "The Moral Monday protests were impressive but didn't make much of a difference," he says. "Does that mean we shouldn't listen to them? No, we should."

Even if there are prospects for bipartisanship, after Mike Easley and John Edwards, it's still hard to get inspired about politicians. "Young people are incredibly cynical about politics, with good reason," says Jackson. "I don't think we should try and talk them out of it. The new generation of elected officials should admit that the system is far from perfect ... but we have a chance to fix some of the problems that appear unsolvable today."

A pearl-wearing mother of two boys, who runs a childcare center and makes goody bags for staffers and colleagues, Cotham is an exemplar of everything that's right about public service. "People need to be involved and shouldn't be afraid to communicate with us," she says. "It will help if people don't see us all as the same, if they see leaders who are real, who are different."

More by Michael A. Cooper Jr.