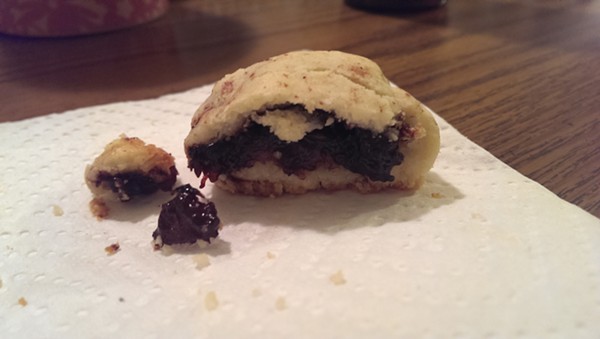 Start with the dough.

Put the butter and condensed milk into a stand mixer, and mix on medium-high for three minutes.

Add two egg yolks one at a time, and mix in.

Pour in all the flour, and mix until combined.

Wrap it all in some plastic wrap, stick it in the fridge, and get ready to cook some meat for a loooong-ass time.

Get a huge pot and add in the oxtail, (Yes, it is indeed the tail of an ox. It's delicious. Get over it.) all the wine, half of the port, the chicken stock, peppercorns, and thyme. Cut the head of garlic in half and throw it in there, too. You're going to strain it out later, because I'm going to tell you to, so don't worry about unwrapping it. Just throw the damned thing in there.

Stir the pot, bring it to a boil over medium-high heat, then let it simmer for three hours. Give it a stir once in a while, too. If all the liquid's evaporated, add more wine or stock, since that's how cooking fucking works. 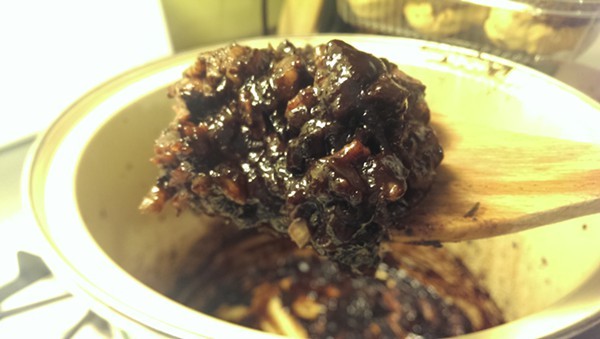 Now you should have some gross-looking meat and equally gross-looking meat juice. Good. That's what you want. Take the meat out, put it on a plate to cool, and shred it up with a couple of forks. If it's not cooperating, just grab a knife and go to town on it. Either way, you want your meat to be in nice, small pieces.

Strain the aforementioned meat juice into a bowl, then pour it back into your pot.

Cut your pineapple and put half of it (the edible, tasty part, that is - don't be thick, people) in a food processor or blender and blend the crap out of it. We're looking for pretty much liquid pineapple here.

Add the pineapple juice to the sauce, bring it to a boil, then simmer for an hour, or until it gets nice and thick, about the thickness of barbecue sauce.

While that's going, use a fork to mash the flour and 1 tablespoon of butter into a paste.

Whisk the paste into your sauce until it's melted in, then cook for another 2 minutes.

Mince the shallots, then melt the other 2 tablespoons of butter in a pan over medium heat.

Saute the shallots for a couple of minutes, then add the rest of the port, both sugars, salt, pepper and red wine vinegar. Stir, then let it cook until the liquid's evaporated. Shouldn't take more than five minutes or so.

Add the shallot mixture and oxtail into the sauce pot, stir, and there's your marmalade.

Take the dough out and let it thaw for an hour or so.

Use your hands to flatten small pieces of the dough and add a bit of the marmalade in the middle, then close it up and roll it into a ball. You want them to be a bit smaller than a golf ball.

Once you've made as many cookies as you have the patience for, mix the last egg yolk and milk together and brush the tops of the cookies with the egg wash.

Stick the cookies in the oven for 25 minutes, let them cool for 5, then put them on a cooling rack. Or don't listen and eat them way before they're cool and burn the shit out of your mouth. Which I totally didn't do.

I totally did pick this track, though. It's Roc Marciano and Killa Priest, with "Slugs Thru Ya Papaya":

When you get right down to it, everything sounds gross on paper. Sure, frying up some bull testicles doesn't sound like the most appealing thing in the world, I'll grant you that one. But guess what? Those portobello mushrooms you reached for instead were grown in a pile of poop. On top of a pile of dirt. Which is probably also mostly poop. All I'm saying is, don't let your brain get in the way of some delicious shit. Stop worrying about what it sounds like and start worrying about what it tastes like. Even if it's meat jam.

[Recipe inspired-ish by this right here.]