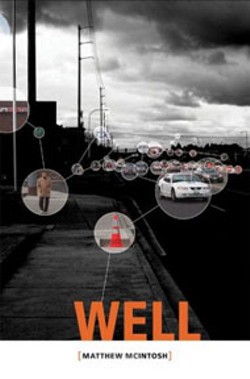 A writer better have a good reason for using experimental techniques, since they oftentimes draw readers' attention to themselves and away from the story. Although this debut novel by Matthew McIntosh has appeared to some as a mere collection of unrelated short stories, he puts his experiments to good use.

McIntosh is never quirky for quirky's sake nor does his work teeter into the bizarre like some postmodern fiction. He favors the use of collage and fragmentary, often unfinished narrative voices which, in a traditional sense, results in an underdeveloped plot and poor character development. But a novel isn't somehow lacking just because it undermines tradition. Nor, in this case, does it mean that McIntosh doesn't have something important to say.

Set in the Seattle suburb of Federal Way, Washington, Well's housewives, construction workers, troubled teens, clerks, waitresses, and students are connected by only the most arbitrary of daily events -- visiting the same local bar, watching a basketball game on TV, or riding the bus. These are ordinary people living their everyday lives, but they're also the forgotten, the suffering, and social outcasts -- drug pushers, barflies, the homeless man at the bus station, welfare queens, people with physical and mental ailments, many of them living on the fringes of modern American society. They are the hopeless multitudes that have learned over the years that "when you're lost in the well and you continue to hope, with each disappointment the bottom drops lower until the world outside the well is only a speck you have to squint your eyes to see."

Now that's a desolate view of the world, a view that can be emotionally overwhelming for readers, particularly when it's echoed by the multitude of voices found in the novel, but that's exactly McIntosh's point. He's a writer with a keen eye for the alienation of blue collar America, a writer who can pinpoint the surprising ways that even the most disaffected among us are brought together, if only provisionally.

Each of the novel's voices leaves a vivid impression, but the strongest is that of a young man who figuratively finds himself swimming to keep his head above water as he watches his family disintegrate around him. In the chapter titled "Fishboy," the 17-year-old narrator finds himself obsessed with a young woman he perceives as having befriended and then abandoned him although she's been rather disinterested from their first meeting. His obsession, however, is merely a general symptom of the overall problem. In the midst of his family's turmoil, he becomes resigned to the fact that "the world was built on sorrow," although consciously he doesn't know why. His idealized version of Emily, however, offers him the hope that perhaps one day she may become that source of stability he craves.

Another noteworthy chapter, "Looking Out for Your Own," is a meditation on the modern American family that points out that we're all somehow damaged goods, and despite our best intentions, the end result is that "we are sometimes bound by the parts of ourselves that we have least control of." The outcome is that we typically end up causing pain for those we love, when all that we really want "is just to be saved" ourselves.

McIntosh's hallmark strengths are his ability to reveal the strings that hold a person together and then his graphic recounting of their scream like a rat on fire when everything begins to unravel. Reading his work is to explore the darkest nether regions of modern American consciousness, but it seems a journey that's necessary and, in the end, one that ends with hope.