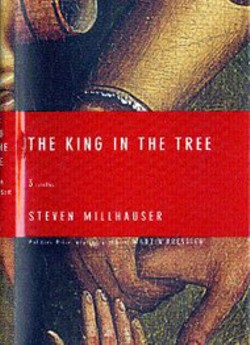 Steven Millhauser has done it again. As in this Pulitzer Prize winner's earlier work, Millhauser blurs the distinction between myth and reality and finds a fresh approach to familiar subject matter. With clear and careful prose and an easy narrative confidence, he plumbs the depths of sexual longing, jealousy, deception, and betrayal in three novellas that are centuries apart in setting, yet closely bound by theme and tone. Delicate and dreamy, this collection contains the unassuming purity of simple prose, and yet manages to evince the most intricate complexities of human relationships; the after-effect is to leave the reader wondering whether these characters can ever rise above their circumstances.The opening novella, "Revenge," is the collection's greatest achievement and by far its most engaging. From the vantage point of a scorned widow, the author quietly chronicles the story of a marriage gone badly. What makes this telling so effective is its unusual perspective: the reader is allowed the vantage point of one eavesdropping on an intimate conversation between a widow and her late husband's former mistress. One is left wondering, who really died here, the husband or the wife? And which is worse, his physical death or her spiritual one?

"That's the thing about the dead:" the narrator explains, "They don't talk to you. They listen but they don't talk back." She finds herself alone, "a living dead woman," estranged from her physical body, half in and half out of this world, left to a ghost-like existence to ponder the "ruined monument" of her marriage, while the mistress (and as a result, the reader) can only sit idly by and listen uncomfortably to a brutal bitterness of painful memories one feels ashamed for having come to know.

In the second novella, "An Adventure of Don Juan," Millhauser blurs the distinction between the real and the imagined, bringing the infamous womanizer, bored with simple conquests, to the English countryside; specifically, to the estate of Augustus Hood, where little difference exists between the natural world and Hood's bewildering estate of artifice and purposeful design, known as Swan Park. Here Don Juan Tenario seeks out the mysterious and unimagined, but finds himself drawn to his old life of simple conquests with Hood's wife, Mary, and Mary's sister, Georgiana.

Don Juan here becomes an essentially postmodern man, full of angst and longing for something more; like Hood, he becomes a man so "desperately dissatisfied with the actual world, he must continually replace it with another." In this case, he imagines himself involved in a brutally passionate love affair with Georgiana, who in turn rejects him, but what he discovers when he comes to a solitary place within himself is what he knew all along: love "is not a sad man sitting under a tree, but a raging sword flashing with blood and fire."

In "The King in the Tree," the King of Cornwall, like Don Juan, is caught between the life of artifice he has created for himself and the reality already perceived by the ladies of the court -- "love is possible only outside of marriage," an idea which seems alien to him. Queen Ysolt, who is forced to marry against her will, is placed in the care of the King's most trusted nephew, Tristan, whom the King loves "like the love of a man for his own life." But when others of the court begin whispering of improper behavior between the Queen and Tristan, the one thing the King could not permit himself to search for "was the truth he sought."

Millhauser's ease with fantasy and his skipping around among different time periods aren't a product of an author's overindulgence in imagination. For every delusion Millhauser creates for these characters, he offers an equally carefully planned dose of the truth, made real by the indulgence of human impropriety.

Those involved in the love triangles of the two latter novellas could easily be named Tom or Bill, Alice or Susan, and if transplanted into a more modern setting, this lustful bunch might make a secret midnight rendezvous at the local "no-tell motel" instead of sneaking around a medieval castle or Swan Park. Millhauser's greatest achievement here comes not through exercise of his great literary imagination or the broad range of material, but through his illumination of the painful and the ordinary in our daily lives -- by having us recognize, in spite of time period or locale, our own weaknesses and ill-advised indiscretions, and understand that these ghostly apparitions wandering Millhauser's exotic landscapes are reflections of ourselves.