Get Shorty, Schlock, Trick 'r Treat among new home entertainment titles | View from the Couch | Creative Loafing Charlotte
Switch to the mobile version of this page. 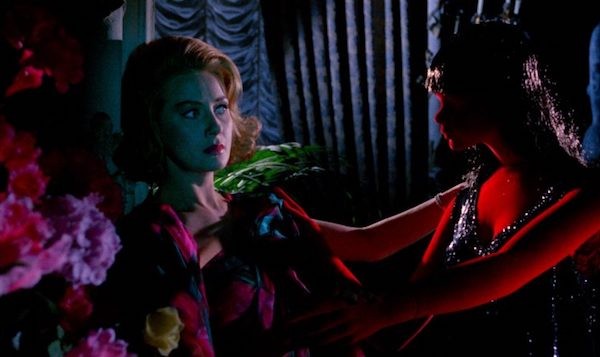 BLOOD AND BLACK LACE (1964). After making a name for himself with a pair of exquisite horror flicks, 1960’s gothic-infused gem Black Sunday (reviewed here) and 1963’s trippy anthology opus Black Sabbath (reviewed here), Italian filmmaker Mario Bava went off and pretty much invented a new film genre all by himself. Generally considered the second produced giallo but the first in terms of importance and influence — the previous year had seen Bava release The Girl Who Knew Too Much, but that one is often overlooked or dismissed — Blood and Black Lace features many of the components that would largely come to define the genre: laser-like focus on the various murders; a camera that’s constantly on the prowl; dazzling use of light and color; and the employment of an American actor in a central role. Centering on a fashion house steeped in corruption and crime, this opens as one of its models is brutally murdered, a slaying that leads the local police to interrogate the owner (Eva Bartok), the manager (Cameron Mitchell), the other models, and various men involved with the couture culture. As is often the case with giallo entries, story is secondary to style, and that’s particularly true here. But what Blood and Black Lace lacks in narrative, it makes up for it on a visual level, and while there would be better giallo films arriving in later years, the postmark on this one makes it essential viewing.

VCI Entertainment’s new Blu-ray/DVD combo set offers the original Italian soundtrack on the DVD and the dubbed English audio on the Blu-ray. Extras include audio commentary by Diabolique Magazine editor Kat Ellinger; separate audio commentary by film historian David Del Valle and filmmaker C. Courtney Joyner (Trancers III); a comparison between the American and European cuts of the film; an archival interview with Mitchell; and a photo gallery. 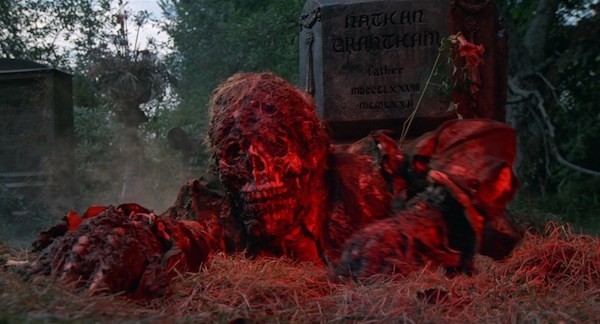 CREEPSHOW (1982) / TRICK ‘R TREAT (2007). Just in time for Halloween, the Shout! Factory label has opted to offer two horror anthology films right in the spirit of the season.

Actually, it’s the spirit of another season — the one featuring the man in red — that’s required when viewing Creepshow, since a certain measure of generosity and goodwill is necessary to fully enjoy this endeavor from director George Romero and scripter Stephen King. An affectionate tribute to those vintage EC horror comics overseen by William Gaines in the 1950s, Creepshow looks terrific, as Romero manages to mimic the style and color schemes of an actual comic book. This visual approach, coupled with the efforts of a game cast, is what sells the picture, since the stories by King aren’t anything special — in fact, two of the five tales sport the same structure (someone who’s been murdered returns from the grave seeking revenge), hinting at a degree of laziness on the part of the bestselling author. A cake, a crate, and cockroaches are some of the ingredients on display, and the cast is varied enough to include old pros like Hal Holbrook and Leslie Nielsen as well as up-and-comers like Ted Danson and Ed Harris (who had starred in Romero’s Knightriders the year before). And King himself appears in one episode, as a pop-eyed rube who discovers a meteor on his property. 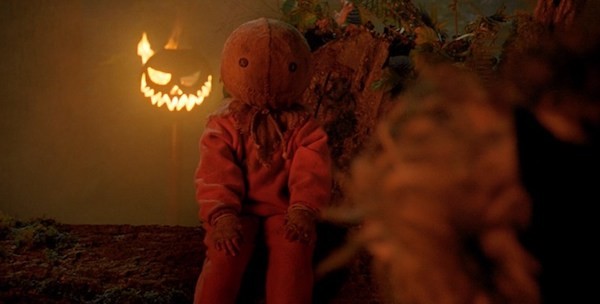 While Creepshow was a modest box office hit, the same can’t be said for Trick ‘r Treat, which was scheduled for theatrical release in 2007 but, save for a few festival appearances, didn’t surface until it was released straight to DVD in 2009. Despite its poor treatment by Warner Bros., the film has managed to become an audience favorite and doubtless helped writer-director Michael Dougherty land the coveted assignment as helmer of the upcoming Godzilla: King of the Monsters. Unlike Creepshow, which offered completely separate vignettes, this cleverly constructed work is set in the same fictional town (Warren Valley, Ohio) on the same Halloween night, thus allowing the characters to cross-pollinate each other’s stories. In terms of its denouement, the most startling tale would arguably be the one involving Anna Paquin, "Little Red Riding Hood," and a masked vampire; in terms of its execution, the most startling would probably be the one in which a cranky old man (Brian Cox) squares off a malevolent tyke dressed like a pumpkin. 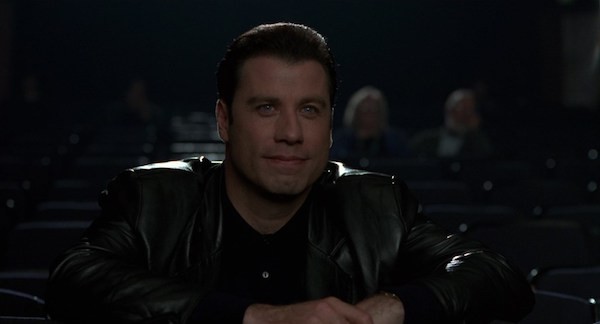 GET SHORTY (1995). Released in the shadow of Pulp Fiction, Get Shorty — for all its critical and commercial acclaim — has never received its due as one of the funniest Hollywood films of modern times. It's hard to believe those wags who dubbed it Pulp Fiction Lite actually took the time to sit through the picture — the two films may share a certain freewheeling bravado and a stellar lead performance by John Travolta, but that's about it. Travolta, for his part, has never been better than he is here, while director Barry Sonnenfeld, careful not to get in the way of Elmore Leonard's dialogue (adapted for the screen by Scott Frank), employs an economical shooting style that's consistently hip without drawing too much attention to itself (another major distinction from the Tarantino flick). Travolta exudes movie-star magnetism as Chili Palmer, a loan shark who heads out to LA on orders to collect a debt. Head-over-heels in love with the world of movies, Chili decides to pursue a career in the business; he hooks up with a dim-witted producer (Gene Hackman), a narcissistic film star (Danny DeVito, simply superb) and a savvy "B" actress (Rene Russo), but his efforts to get his project off the ground first depend on his ability to get various crime underlings off his back. Dennis Farina contributes countless uproarious moments as a hoodlum incapable of uttering a sentence without injecting it with some choice profanity; he and DeVito almost swipe the movie from its leading man.

Blu-ray extras include audio commentary (from 2005) by Sonnenfeld; a making-of featurette; a deleted scene featuring Ben Stiller; a 2002 episode of Bravo’s Page to Screen that showcased Get Shorty; and the theatrical trailer. 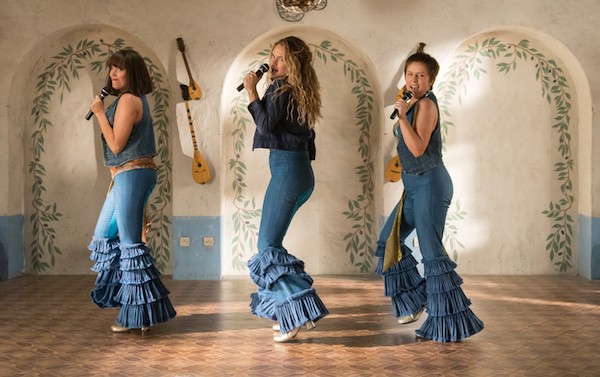 MAMMA MIA!: HERE WE GO AGAIN (2018). The overlapping section in the Venn diagram that represents Kurt Cobain and me is probably pretty small, but that sliver of shaded area definitely contains the tidbit that both of us are fans of ABBA. We’ll never know what the Nirvana headman would have thought of the 2008 screen adaptation of the smash stage musical Mamma Mia!, but I for one was devastated with what turned out to be a major disappointment. Leadenly directed by Phyllida Lloyd, it featured a bright performance by Meryl Streep as Donna but was crippled by off-key singing, clumsy choreography, and editing that appears to have been attempted with a particularly dull butter knife. Still, the picture made an astounding $615 million worldwide, meaning that a wholly unnecessary sequel was eventually going to hit the screen. So the shock is that Mamma Mia! Here We Go Again is actually a worthy follow-up — it outshines the original in virtually every department, with better singing, better dancing, and better humor. While much of the film centers on the attempts of Donna’s daughter Sophie (Amanda Seyfried) to open a hotel on the Greek island of Kalokairi, the focus is on flashback sequences that reveal how a young Donna (Lily James) not only came to Kalokairi but also how she became involved with the three men who would each capture a piece of her heart. It’s difficult for any actress to “play” Meryl Streep, but James proves to be splendid in the role, nailing the joie de vivre spirit that flows through Donna at every point of her life. And if the late arrival of Cher as Donna’s mom isn’t the socko finale we had desired (Bette Midler would have been a better choice for this role), it’s sturdy enough to put the finishing touches on this raucous party. 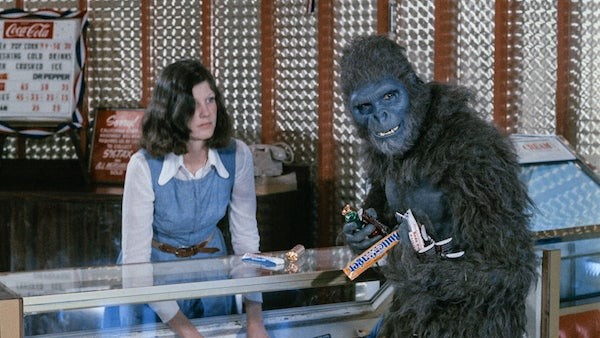 SCHLOCK (1973). Long before An American Werewolf in London, National Lampoon’s Animal House and even the glorious Kentucky Fried Movie, John Landis made his directorial debut with Schlock, exactly the sort of low-budget picture one would expect to be the calling card of a young kid weaned on classic movies and tattered issues of Famous Monsters of Filmland. Shot in less than two weeks with a budget estimated at $60,000, this campy effort (also written by Landis) finds the director himself playing “The Schlockthropus,” a prehistoric ape who instigates a quasi-reign of terror in a California suburb. The humor is strictly of the hot-and-cold variety, with a handful of laugh-out-loud moments followed by vignettes that draw nary a chuckle. Still, in-the-know film fanatics will find much to enjoy, from the spoofs of King Kong, Frankenstein and 2001: A Space Odyssey to the cameo appearance by Famous Monsters editor Forrest J Ackerman. (This is also where Landis’ running gag of See You Next Wednesday got off the ground.) Schlock is responsible not only for jump-starting the career of Landis but also for serving as one of the earliest credits for legendary makeup artist (and seven-time Academy Award winner) Rick Baker, whose simian designs would later be perfected in such works as Greystoke: Legend of Tarzan, Lord of the Apes and Gorillas in the Mist. 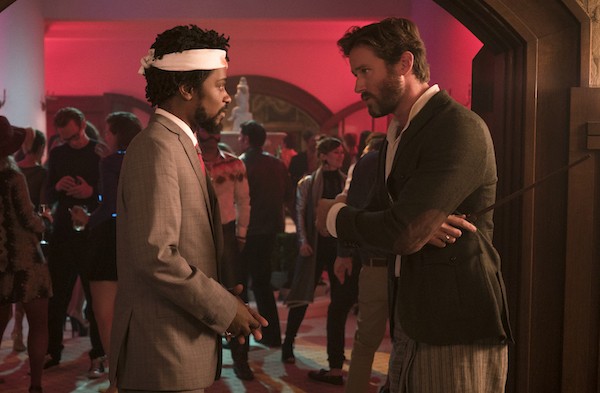 SORRY TO BOTHER YOU (2018). An outrageous and uncompromising assault on capitalism, consumerism, racism and other unpleasant -isms that have come to define these United States of America for all but the most myopic, ignorant or uncaring, this stars Lakeith Stanfield as Cassius Green, a struggling young man who lands a job at the telemarketing firm RegalView. Cassius is having no luck landing any sales until he adopts and employs a “white” voice (David Cross provides the Caucasian vocals), at which point he becomes a raging success at the company. His meteoric rise gets noticed by Steve Lift (Armie Hammer), the CEO of a company (WorryFree) that promotes a modern version of slavery. Steve feels that Cassius is just the man he needs to take his plans to the next level, but is Cassius willing to sell out to such an unprecedented extent? Written and directed by Boots Riley, Sorry to Bother You is both bold and unpredictable, yet it’s only after the potent first half that the film takes a turn into a truly fantastical direction. This gamble on Riley’s part will doubtless thrill many while turning off an equal number — personally, it didn’t wreck the movie for me, but I was disappointed that Riley felt such a lurch was necessary to bring his points home. The film’s structure — a simmering first half followed by a risk-taking back end — mirrors that of last year’s superb Get Out as well as the excellent “Black Museum” episode of Black Mirror, but whereas those challenging works eased into the outrage and thus made them believable and acceptable, this one steps too far over the line into occasional silliness. Had Riley maintained a tighter grip on the reins, it might have resulted in a true cultural phenomenon.

Blu-ray extras include audio commentary by Riley; an interview with Riley; and a photo gallery.