Funky Seafood Joint Keeps It Moving Through Thick and Thin

Just the right amount of Krazy

As a young Italian boy growing up in New York City, Giorgio Prisco had six plates cracked over his head. His mother thought that was the most suitable punishment for a child who refused to do the dishes. After that, Prisco was afraid to ever leave the kitchen. So, he started cooking. And he never stopped.

Those strikes to the noggin, however painful, may be what sent Prisco into a life of cheffing, but it also may be what made him a little crazy.

You can get a peak into Prisco's mind just by walking into Krazy Fish, his restaurant on Central Avenue. When he opened the restaurant in 2011, he decided that, rather than hire an interior designer, he'd just weld together parts of his daughter's toys with anything else he could find, trying to make the creations resemble fish, somewhat.

A mermaid made out of trash hovers above the center of the dining room. With a wig for hair and a dustpan for a tail, she watches customers as they chow down. Right next to her, there's a street sign that a customer plucked out of the ground and brought in as a donation.

Nothing about any of it makes sense, but somehow the effect is undeniably homey. Customers even bring in their own creations to contribute to the wacky scene. You can negotiate taking home something if you like it, but you have to replace it with your own handmade craft; the crazier, the better.

The restaurant's one-of-a-kind decor isn't the only thing that makes Krazy Fish so memorable. It's also what's on the plate. The food is a fusion of cultures, inspired by Prisco's travels. He's been all over the United States and to multiple different countries to taste different cuisines. But it all started with Italy.

Prisco's parents owned Italian restaurants in New York, so he grew up cooking dishes like meatballs, lasagna and spaghetti. He got "tired" of eating the same meals, he said, and started eating more often at his friends' houses — friends of different ethnicities. "I started eating curry and started eating Asian food, stuff like that," he said when we visited recently. "It piqued [my interest]. It intrigued me."

As an adult, Prisco followed in his parents' footsteps, owning Gemelli's Pizza and Pasta in Matthews for about seven years. As with his taste for Italian food, he said he also got "tired" of that and decided to move on.

While trying to decide what to do next, he realized there was no fish taco place in the rapidly growing Plaza Midwood neighborhood and he recognized a need for one. He infused all kinds of cultures in his menu, especially Asian, Latin, Indian and southern U.S.

"Truly, our menu is one-of-a-kind," said general manager Jason Kesler. "There's really nothing else like it in Charlotte."

Krazy Fish is known for its cactus salad, which it buys locally from a woman who grows cactus down the street, and its jalapeno cheddar grits.

"Even people that don't like grits love those grits," Kesler said.

The tacos overflow with "Krazy slaw" and salsa. Everything on the menu is local and fresh, never frozen.

According to Kesler, most first-timers like to order the gumbo that Prisco served to Guy Fieri on Diners, Drive-Ins and Dives. The Food Network liked it so much, it brought Fieri back to Krazy Fish for an episode of Guy's Grocery Game.

However, even though the restaurant has been recognized on the small screen and won countless awards for what it serves up, it's not been an easy road for the Krazy Fish crew. In 2013, Prisco's former co-owner, K.C. Terry, was arrested and charged with soliciting prostitution in South Carolina. Police said he had been propositioning boys for sex in exchange for money at a Krazy Fish in Georgetown, South Carolina.

The Georgetown location is now closed, and Prisco emphasized that he had stopped working with Terry two years before his arrest.

"We fired him after we found out what was going on," Prisco said. "That was it. Done."

Terry, who also owned Fat City Deli in NoDa, was well-known in the area, which made his arrest unexpected. In the tight-knit neighborhoods of Plaza Midwood and NoDa, the story got people talking, but most recognized that the Charlotte Krazy Fish was not in any way related to Terry's criminal activity.

"That was out of left field," Kesler said. "I don't think there's anything you can do to expect that situation. The justice system did their thing and then, of course, he was pushed out of town basically. All we can do is just keep doing the right thing moving forward."

A year later, Krazy Fish faced another obstacle: a property battle with Walgreens. The landlord Bobbye Howell told Prisco she would sell to him before Walgreens if he could raise $70,000 in 16 months for the down payment. For a short time, the community thought its might lose the funky hangout. The restaurant even started a GoFundMe page to help raise money.

Everything worked out, though, and now that Prisco owns the property outright, he vows to never sell. 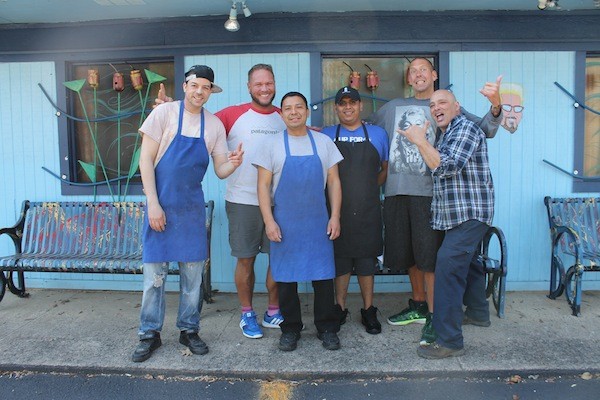 "What I was afraid would happen is all these condo places would start popping up and the things that make Plaza Midwood, Plaza Midwood would close and leave because they can't afford the property anymore," Kesler said. "[Prisco's] not down with that. I mean, progress is good but you need to keep the character of the neighborhood here."

With the property safe in Prisco's name, Kesler now refers to those same condos as a "blessing." They've pulled in a lot of steady business for the restaurant.

From here on out, it's only up — literally. Prisco's goal is to add another story to his building one day. He's also been trying out some recipes for a potential barbeque restaurant, but with some fusion, of course.

In the meantime, Prisco is starting a "taco war." For the next few Tuesdays, tacos are $2 each with a drink purchase. He wants to see which taco will be the best seller.

So sit back on a paint-splattered wood booth, or outside on the patio surrounded by whimsical art, and order a taco, or two, or three. Remember, every order is a vote for your favorite. We all have to do our part in the war effort.