Girl Power: Hard Candy, Akeelah and the Bee | Reviews | Creative Loafing Charlotte
Switch to the mobile version of this page.

LONG AFTER THE din surrounding the merits of Hard Candy (*** out of four) has died down, people will still be discussing The Scene.

Opening two weekends ago in limited release (and opening this Friday locally), this compact feature from director David Slade and writer Brian Nelson -- a movie so controlled and claustrophobic that audiences will be forgiven for assuming it was based on a play (it wasn't) -- has already divided critics and patrons with its controversial subject matter and even more controversial approach. And in the weeks ahead, folks will continue to exhaust themselves trying to determine whether this is an exploitation flick, a feminist empowerment drama or a particularly feisty coming-of-age yarn with a diabolical twist. Yet whatever their conclusions, they still won't be able to shake the ick factor of The Scene.

Admittedly, men will be more disturbed than women with what goes down during this grisly sequence, which implies more than is actually shown. But the set-piece is ultimately so potent that -- as with that apex of The Scene contenders, the sliced-ear moment in Reservoir Dogs -- everyone will cringe in horror (and, yes, nod with approval), not only at the act being performed but also by what it says about the two characters involved in this Dr. Moreau-level mutilation.

Hard Candy takes the hard sell topic of pedophilia and immediately puts the audience at unease by zooming in on the IMs between 32-year-old Jeff (Patrick Wilson) and 14-year-old Hayley (Ellen Page). From there, it moves onto their first face-to-face rendezvous at the local coffee shop. He's a bespectacled, pleasant-looking guy who's a photographer by profession and she's a precocious teen prone to referencing Jean Seberg and Elizabeth Wurtzel in conversation. He's utterly charming, which of course only leads to our building discomfort because, well, we've read his IMs and know exactly what's on his mind. It also doesn't help that cinematographer Jo Willems' camera repeatedly insists on employing face-hugging close-ups, a favorite technique in slasher flicks as it doesn't allow the audience the luxury of seeing what unexpected dangers reside just outside the frame. Here, it's cannily used in a reverse manner: We can't see if there are any exits at Hayley's disposal if matters get out of hand.

After engaging in some mutually flirtatious banter at the coffeehouse, Jeff ends up asking Hayley to accompany him back to his house, where they're soon downing screwdrivers and staging an impromptu photo session. But just as we fear that Hayley will become another victim of an Internet predator, the tables are turned in dramatic fashion. Jeff's luscious Lolita has unexpectedly morphed into an avenging angel, and from here the film turns into a variation on Roman Polanski's Death and the Maiden (Polanski even rates a mention in a pointed exchange) and the forgotten Alan Rickman-Madeleine Stowe polemic Closet Land, as the interrogator tries to determine the depths of the prisoner's perceived wrongdoing.

Wilson, an acclaimed Broadway actor whose film work has mostly been snooze-inducing (Raoul in The Phantom of the Opera, William Travis in The Alamo), is excellent as Jeff, who tries every tactic in the book to discourage his captor from following through with her plans. Yet the real discovery here is Page, phenomenal as the teen brainiac who's almost always one step ahead of the adult who under normal circumstances would be the one controlling the situation. It would be wrong to view Hayley simply as a righteous vigilante carefully calibrating the scales of justice so that they again tip in favor of the victims -- the fact that it's a teenager who has concocted this elaborate and unsettling "gotcha" proves to be one of the movie's most interesting concepts, and Page never shies away from the implication that Hayley might be disturbed by her own set of demons. By the time the character gets around to wielding her weapon of choice, we realize that Hard Candy isn't necessarily a movie about lost innocence. In a modern world ruled by technology that allows 14-year-old girls and 32-year-old men to easily hook up, it's possible that this innocence never had a chance to flourish in the first place. 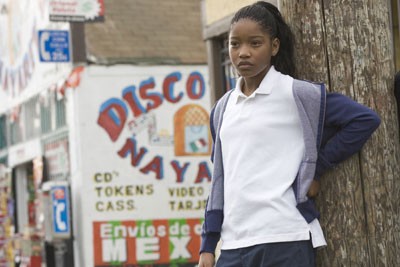 THE PATTERN HOLDS that every decade's midway stretch gives us an underdog worth supporting. In the 1970s, it was Rocky, in the 1980s, it was the Karate Kid, and in the 1990s, it was Babe. And now here comes 11-year-old Akeelah to carry the torch for the little people.

Akeelah and the Bee (*** out of four), which in addition to its underdog roots also manages to come across as a mesh between the documentary Spellbound and Boyz N the Hood refitted with a happy ending, is the latest of this month's inspirational yarns (following Take the Lead and Preaching to the Choir). It's also the most genuinely touching. The lion's share of the credit for its success goes to Keke Palmer, who essays the central role of Akeelah Anderson. Like Hard Candy's Ellen Page, she's a teenage actress, yet both her understanding and command of her craft enable this rising talent to carry the picture like an established trouper. Her part may not be as complex as Page's role in the pedophile picture, but she ably handles whatever challenges are thrown her way.

Growing up in south LA with her widowed mother (Angela Bassett) and two older siblings, Akeelah's only true passion is for spelling -- a seemingly frivolous fancy considering her dour surroundings and dead-end options. But determined to somehow put his decrepit school on the map, the principal Mr. Welch (Curtis Armstrong) encourages Akeelah to try out for a competition that will determine which student will represent them in upcoming spelling bees. Akeelah easily trounces the competition and in doing so catches the eye of Dr. Larabee (Laurence Fishburne), Mr. Welch's friend and a former spelling wiz himself. Dr. Larabee agrees to coach Akeelah through the exhausting bee season, and their goal is no less than to reach the Scripps National Spelling Bee finals.

From the mental approach espoused by Dr. Larabee to the presence of an unsmiling nemesis, Akeelah and the Bee milks the Karate Kid/Rocky formula to such an exhaustive degree that you half-expect a character to bellow "Yo, Adrian!" or order Akeelah to "wax on, wax off." But what sets the film apart is the manner in which it details how Akeelah's triumphs end up lifting the entire community. Her success is their success, and it's truly inspiring to watch neighbors from all walks of life -- everyone from the postman to the local crime lord (!) -- throw their support behind her. On paper, the narrative device employed by writer-director Doug Atchison during the climactic moment may sound overreaching, but on screen, it plays beautifully and allows the film's real message to round all the bases before sliding home. There's no need to hide that lump in your throat or tear in your eye -- this movie earns its sentiment.

MICHAEL DOUGLAS PLAYS Harrison Ford and Kiefer Sutherland costars as Tommy Lee Jones in The Sentinel (** out of four), the latest thriller that tries to put one over on the audience but ends up only fooling itself. It's clearly no match for The Fugitive, though this "innocent man on the lam" yarn gets some mileage (well, some yardage, anyway) out of a fairly taut first act and an appropriately constipated Michael Douglas performance.

Douglas is cast as Pete Garrison, a career Secret Service agent ballsy enough to carry on an affair with the first lady (Kim Basinger). But evidence soon surfaces that a foreign outfit is plotting to assassinate the president (David Rasche), and that their inside man is no less than a member of the Secret Service. The agents are subjected to polygraph tests (it's at this point in the movie that alert viewers will easily be able to pick out the mole instead of having to wait for the third-act revelation), but because Garrison is concealing his illicit affair -- and being led by the nose by the real culprits -- his lie detector results convince agent David Breckinridge (Sutherland) that his former mentor is the traitor in the ranks. Garrison manages to avoid capture and thereafter stays one step ahead of Breckinridge and his rookie partner (Desperate Housewives' Eva Longoria, spinning her wheels in a tissue-thin part) in order to nab the villains and clear his own name.

It's fun to watch Garrison use his extensive Secret Service training to thwart his fellow agents, and the attention to detail demanded by director Clark Johnson (S.W.A.T.) at least provides the picture with a convincing framework. Unfortunately, the script by George Nolfi (adapted from Gerald Petievich's novel) runs out of steam long before the physically fit actors in the cast, leading to a string of unsatisfactory resolutions and tedious action set-pieces. Johnson doubtless planned to deliver a hand-wringing thriller filled with unexpected twists and turns, but even good intentions can find themselves caught in the line of fire. 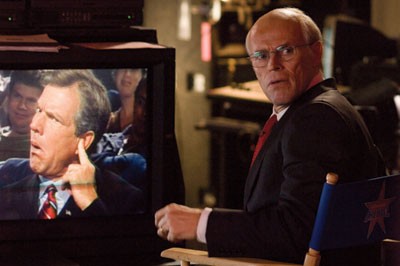 THE DECLINE OF the American empire -- or at least the dumbing down of its populace -- began in earnest some time ago, but it has clearly reached its zenith with the twin threat of the Bush presidency and reality TV. Both, of course, are obvious targets for satire, but it's hard to mock something that in itself is already a mockery of sorts -- better to just let the cameras roll and allow the subjects to shoot themselves in the feet (hence the potency of Michael Moore's Fahrenheit 911 or Robert Greenwald's string of rabble-rousing documentaries).

But writer-director Paul Weitz, bless his ambitious soul, has nevertheless decided to accept the challenge in duplicate, by simultaneously setting his sights on both Dubya and reality television. Weitz has proven himself adept at different forms of comedy -- he's the guy behind In Good Company, About a Boy and the original American Pie -- but this time he's bitten off more than he can masticate.

The only factor that saves American Dreamz (** out of four) from completely self-destructing is the strength of an ensemble cast led by Dennis Quaid. Quaid gamely plays President Staton, a buffoon who on the morning after his reelection picks up a newspaper for the first time during his reign and realizes that, contrary to what his chief of staff (Willem Dafoe in a wicked composite of Dick Cheney and Karl Rove) has been telling him, the world's actually a complicated place. To take the Prez's mind off weighty matters, the chief of staff decides to book him as the guest judge on the season finale of American Dreamz, a moronic "talent" show based on you-know-what. The show's host, a repellent Brit named Martin Tweed (who else but Hugh Grant?), agrees to the arrangement but is more interested in making sure that his cash cow remains prime-time's top-rated program. On that front, he has little reason to worry, as audiences adore two of this year's crop of contenders: duplicitous Sally Kendoo (an effective Mandy Moore), who will do anything to win, and Arabian immigrant Omer (likable Sam Golzari), a reluctant terrorist-in-training who's far more interested in show tunes than in following orders to kill Staton on live TV.

American Dreamz is a crushing disappointment, a weak-willed, ill-conceived film with a scarcity of laughs and a maddening tendency to let its subjects off with a slap on the wrist rather than go for the jugular. Lacking the lockjaw clench of a Dr. Strangelove or a Network, it's content to offer toothless stereotypes and defanged targets. This isn't a black comedy -- it's more like a whiter shade of pale.