Going Beyond: Surrealism at center of three Mint exhibits 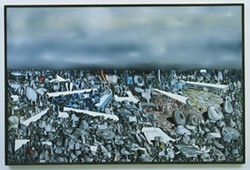 There are probably few movements as closely associated with the stereotype of the flamboyant, crazy artist — or that have spawned so many bad imitators — as Surrealism. So it's refreshing to see three exhibitions at Mint Museum Uptown, collectively titled Surrealism & Beyond, that address a few of the less-hyped aspects of this groundbreaking period of art history.

The centerpiece of Surrealism & Beyond is Double Solitaire: The Surreal Worlds of Kay Sage and Yves Tanguy, the first exhibition to display together the work of these two important artists.

Sage and Tanguy were married for 15 years, until his unexpected death in 1955. Double Solitaire breaks new ground in its examination of how their intense relationship yielded two exquisite, interlocking bodies of work.

The exhibition begins with two disparate paintings: Sage's austere "The World is Blue," 1938, with its egg-like forms and raking light, and Tanguy's more frenetic "Movements and Acts," 1937, with its crowded, seemingly random assortment of objects. As the exhibition progresses, it shows how the two influenced each other even though they never looked at each other's work in progress and never exhibited together. They maintained this separation because Sage wanted her work to be appreciated on its own merits (it was), and Tanguy had a difficult time acknowledging Sage's importance to him as an artist. In particular, the show emphasizes how Sage influenced Tanguy in, for example, the use of architectural forms and a monochromatic palette.

At the end, the exhibition becomes foreboding and despairing. In "Multiplication of the Arcs," 1954, Tanguy's last major painting and his most lauded, it's almost as if he knows death is near. This apocalyptic painting reads like a summation, as if Tanguy tried to cram every symbol or image he ever used into a single work. Amazingly fresh and contemporary-looking, it does not seem like something from art history or even the recent past.

After Tanguy died, Sage's work became even more stark. The bleak and dark "A Bird in the Room," 1955, one of the exhibition's final paintings, appears to depict the frame of an abandoned building taken over by strange, bulbous vegetation. Missing Tanguy and losing her sight, Sage shot herself in the heart in 1963.

From the somberness of Double Solitaire, one moves to the vividness of Seeing the World Within: Charles Seliger in the 1940s. This show covers the first 10 years of Seliger's career, starting in his teens.

While Seliger explored a Surrealist vocabulary and was especially interested in automatic writing and drawing, he was also immersed in the natural world. Many early paintings abound with plant and animal forms. By the mid-40s, his work became even more aggressively organic and dense with colorful, almost illustrational, marks and images.

Gordon Onslow Ford: Voyager and Visionary is a small, tender retrospective of work drawn from his family's collection. The British-born Ford was a Surrealist in his early years, but his subsequent interest in Eastern cultures caused his work to change so dramatically that he eventually resigned from the Surrealists. Several earlier paintings in this exhibition bear a resemblance to the work of the famed Arshile Gorky; it turns out that Gorky attended the influential lectures on Surrealism that Ford presented upon his arrival in the United States.

In addition to Ford's own work, the show also includes efforts by notable artists in his family, as well as gifts of art exchanged among family members, including a needlepoint his sister did of one of his paintings and an exuberantly painted birthday letter he sent to her.

These three exhibitions, the work of the Mint's Curator of American Art Jonathan Stuhlman, not only represent the largest-ever exhibition of Surrealist and Surrealist-inspired art in the Southeast. With their original concepts and extensive catalogues, they're also further evidence of the Mint's ambition to play on a larger stage.

The exhibitions Double Solitaire: The Surreal Worlds of Kay Sage and Yves Tanguy, Gordon Onslow Ford: Voyager and Visionary (both through May 13) and Seeing the World Within: Charles Seliger in the 1940s (through May 13) are on view at the Mint Museum Uptown, 500 S. Tryon St. www.mintmuseum.org. 704-337-2000.