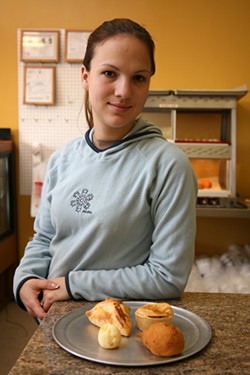 Until now, the only Brazilian culinary outposts in Charlotte have been the expensive prix fixe carnivorous dream spreads at the all-you-can--eat churrascarias. Rarely, though, did you find a table filled with Brazilian ex-pats. This was a curious situation since some in the Charlotte Brazilian community estimate their population to be around 5,000.

Several Brazilian shopkeepers say most ex-pats live within a mile or so of the Monroe Road and Highway 51 intersection. Thus, and not surprisingly, two Brazilian grocery stores and one Brazilian telecommunications shop are located there as well as Pão Brazil Bakery & Café, the first Brazilian bakery to open in Charlotte. Owners Elaine Magalhaes and her daughter Acyra Godoy -- who formerly lived in Framingham, Mass. -- trained in a baking school in Massachusetts before relocating to Charlotte to open their bakery in July 2006.

Pão Brazil, like other ethnic bakeries, becomes a destination for euphoric ex-pats wanting to taste something from the past that has happily found its way into today. For everyone else, ethnic bakeries offer an inexpensive way to become acquainted with an unfamiliar cuisine or rekindle memories of a journey. Either way, the results are sweet. Literally.

Multicultural and multiethnic Brazil is indebted to a variety of cultures for its cuisine and in this bakery dwells relics of the indigenous, African, and Portuguese cultures as well as the newly introduced elements of Syrian/Lebanese cuisine.

Pão's décor is generic strip mall: Bright and spare, it's a glory of unadorned informality. The television, tuned to a Brazilian station, is viewed by one group; the front bakery case bears layers of sheet desserts and cakes. A few tables, strewn with copies of the two local Brazilian newspapers, cluster on the right side along with a drink refrigerator and a neighborhood message board. The menu and much of the signage, including the daily lunch specials posted in the front window, are in Portuguese; however, Isac Magalhaes, who runs the cash register, and Godoy are fluent in English.

Many customers come in for bags of oval-shaped pão francês (3 for $1), which is a bread similar to a Mexican bolillo, about six inches long with an ultra crunchy crust; or the pão de queijo, cheese buns eaten in the morning. The most popular bakery items, though, are the salgadinhos -- which include small savory snacks like the crispy coxinhas (weighty coquettes filled with a savory chicken mixture). If you arrive in time for the coxinhas, there will probably also be the Brazilian version of an empanada, but it's larger and more rustic with a thicker bread dough and an internal mixture more Middle Eastern than South American. Empadinhos with a chicken and olive filling, classic meat pies with a flour-butter dough, are delicious and cheap.

Although high energy guaraná (the wonder fruit) sodas are in the drink case, opt for smoothies: either the thick açaí, made here from frozen black-purple pulp of a palm tree and overly ripened bananas, or the other Amazonian super food, a cupuaçu. Straightforward daily lunch specials begin around noon consisting of thinly sliced grilled meats or a mixture of vegetables and meat with rice and beans and a small iceberg lettuce salad. Sandwiches, offered all day, sometimes include the bife pão (steak sandwich) complete with a surprising sprinkle of corn kernels. The x-tudo, an extreme cheeseburger, is even more fun with bacon and egg. Lunch is a deal at less than $5.

Desserts, oddly enough, do not appear to be as dominant. Yet, there's something about the creamy pineapple cake that reminds you of the dessert your favorite aunt brought over on holidays. Some desserts succeed more than others: yes to the flan and sonhos, cream puffs stuffed with egg custard; no to the dry corn cake.

Maybe the unfussy hominess increases their appeal or is it the glorious pride of native cuisine? In either case, Pão Brazil is proof that if you can't go home again, or right now, at least you can go to someone else's place.

• Sweet Brazil Café, 5622 E. Independence Blvd., 704-567-9822. Open daily. (This used to be a café, but now strictly sells groceries and other products from Brazil including soccer T-shirts).

• Coisas Do Brasil, 10915 Monroe Road, 704-321-5504. Open daily. They stock Guarana Antarctica (a popular brand of soda made by Pepsi). The guaraná berry has three times the caffeine as a coffee bean. The Antarctica brand has more carbonation than its competitors.

Eaters' Digest is back. Do you know of a restaurant that has opened, closed, or should be reviewed? Does your restaurant or shop have news, menu changes, new additions to staff or building, upcoming cuisine events? E-mail me!