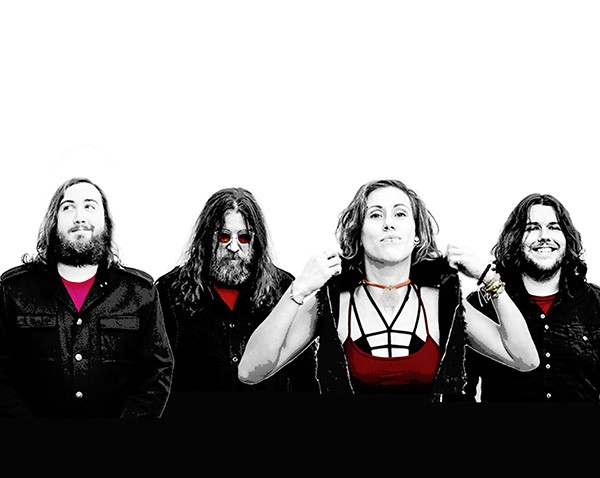 Oozie and Ray had been through hell and back together. As only punk rock kids and best friends can, they'd seen each other through horrific car accidents, insane relationships, and other slings and arrows of outrageous fortune that could break the weak-hearted. So on this cold Canadian night, when Oozie told Ray to get off her duff and enter the online songwriting competition she had shown some interest in, she was going to listen.

Things were looking good for Ray Syd Stern in London, Ontario. A frenetic, eyes-wide-open punk rocker who'd drawn comparisons to Siouxsie Sioux as early as her first band, the Peace Leeches, Ray was no stranger to leaping into the unknown. "I'm versatile, interested and open to experimenting," she says with a laugh. "I'm a little neo-punk kid at heart."

Ray's solo project was about to drop an EP, and there were multiple collaborations with video artists in the works. In addition to being a punk, Ray is also a Zen gambler deep down, and not afraid let it all ride. But sometimes it's easy to let things slide a bit. So Oozie was there to keep her on track.

"He kept bugging me to enter this competition," Stern says. "And it was at the very last minute, so because I updated my Sonicbids profile I shot to the top of the feed."

Messages started appearing in Ray's inbox almost immediately. Nothing out of the ordinary, of course, which is all part and parcel for putting oneself out there. If you're a young rocker in the 21st century, that is. What the first email message said, however, was a little unusual.

"Hey I know this sounds crazy...", the email began, "...but wanna come to Charlotte and join a rock band?"

John Thomsen, by any Gen-X male's grudging admission, had most definitely figured it out: Domesticity is the enemy of rock'n'roll.

That's been the commandment laid down since pop antiquity. And you never put your kids in the act, unless you're the Cowsills or, God forbid, the '80s version of the Mamas & the Papas. By forming a band with his two sons, Hunter and Tyler, John Thomsen should have been on the fast track to Dad-rock ignominy. What he wound up doing was mapping a course to adulting responsibly, while maintaining his dreams by forming the critically acclaimed and locally adored rock group Grown Up Avenger Stuff. The band's not-so-secret weapon? A woman named Dierdre Kroner.

It's hard for Charlotte rock'n'roll to remember a time that it wasn't marveling at the ethereal young woman with a voice that could veer like a NASCAR driver on a rain-soaked track between seduction and murder. Nevertheless, there was a time when Kroner's style of rock singing had to step forward into the light, and when it did, her effect on audiences was startling.

And now Kroner has moved on, forming a new band, Chosovi, which is already making waves on the Charlotte music scene. In her place: that Canadian woman who entered the songwriting contest, Ray Syd Stern. After a series of shows at the South by Southwest Music Conference in Austin, Texas, in mid-March, Grown Up Avenger Stuff will be introducting Stern during an April 1 show at the Visulite in Charlotte.

But let's rewind again. Take a trip back to the early days.

At first, painfully shy, original singer Kroner, an artist and mom, experimented with various approaches to her performance, including elements of theater. There was an early GUAS show at the since-departed Amos' Southend where the band's show was boosted by a mid-set strobe-lit duel between Kroner, in a homemade superhero outfit, and ninjas. Yes, that happened. And as it happened, the band began getting very good, very fast. 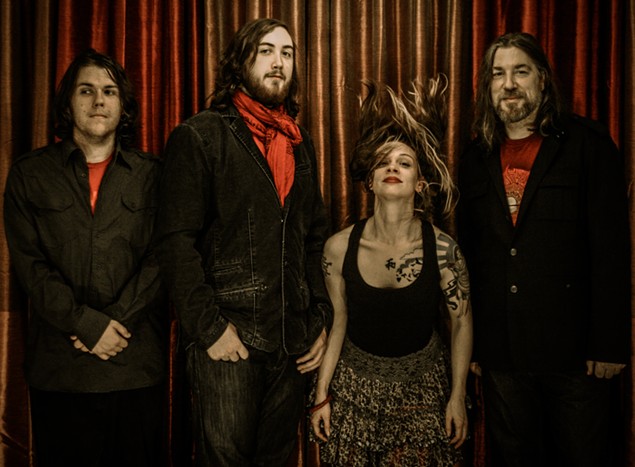 One critic put GUAS "on par with bands such as the Yeah Yeah Yeahs, Queens of the Stone Age, Florence and the Machine and Grace Potter and the Nocturnals." Another wrote that he hadn't "been this excited since I first heard Alabama Shakes."

From the gate, GUAS knew that taking the act on the road would be essential, so the band traveled to K-Days in Edmonton (one of Canada's top festivals), Indie Music Week and Canadian Music (Toronto), and performed well-received shows in Italy, Poland, Latvia, Estonia and Finland.

Through it all, Kroner and her cronies continued to improve. Hunter and Tyler Thomsen got tighter and more confident as a rhythm section, John Thomsen continued to deliver bonecrushing riffs and arrangements, and Kroner, when she was firing on all cylinders, could convince you that whatever pain she was trying to exorcise was the only pain in the world.

The band's first album, Sparkelton, released in October 2013, was welcomed by local and regional audiences. The band had begun to explore psychedelia, and Kroner had emerged as a confident, in-your-face chanteuse. New shows were booked, and the band recorded a follow-up, Eclectica, which would eventually come out in February 2016. But a few months earlier, in October, GUAS got an internal shock: Kroner decided she could no longer juggle her family and band responsibilities, and announced she would leaving.

"It was a very difficult decision to make," she remembers, "I have a son, and everyone has bills. I wanted to keep touring with GUAS indefinitely. Those were some of the best times of my life. But coming home to scrape together money for bills and time for family became something I was struggling to balance, and it began to take its toll as GUAS began to get more traction."

She was grieved, but resolute that GUAS had to continue. "I had to bow out to get my life in order," she says, "but I couldn't stand the thought of GUAS being over because of that."

Though shaken, John Thomsen was supportive. "Deirdre obviously is an amazing vocal talent, and is an all-around awesome person," he says. "We were very fortunate to work together for as long as we did. She put six-plus hard years into the band, and during that time, the growth of the band became more and more demanding — more than any of us had anticipated."

Dates in 2016 to promote Eclectica were honored while the band quietly searched for a new voice. "With Deirdre's support, we quietly searched all that year, auditioning singers near and far," Thomsen says. "Of course, the bar for singers had been set very high."

The subsequent 14-month search for a singer was fruitless. Despite his outward lighthouse cool, Thomsen was starting to have doubts. "We had focused on finding a perfect match," he remembers. "We had a small army of people assisting in the search.

"We reviewed over 1,000 singers and had prospects send us recordings of their vocals on a couple of our songs chosen from the last two CDs," he goes on. "We brought a handful of those to Charlotte to audition in person to see if there was a fit."

Nothing. "We got our hopes up with a couple of them," he says, "but for various reasons, it didn't work out."

And then, on an unsually warm December night in Charlotte, Thomsen spotted the Sonicbids online profile that piqued his interest. An electric-haired Canadian punk-rocker with seemingly impeccable music taste.

"Her favorite bands listed were David Bowie and Queens of the Stone Age!" Thomsen says, and laughs, " We were almost afraid to be hopeful when Ray's stuff popped up on our radar. Here was an experienced and fearless performer, with a huge and powerful voice, so we were pretty excited. It seemed too good to be true."

Up in Ontario, Stern was finding it hard to ignore the way the pieces seemed to want to fall together with this band in North Carolina. "It certainly seemed cosmic due to our similar music interests," she says. "Apparently, GUAS had been searching on there for a little while, so it's just interesting how it all went down." Still, there was some thinking to do. "I was about to release an EP and had some video collaborations in the works," she says. "I had a network from my previous band, a great group of supporters."

Ultimately, she couldn't ignore the signs. Tying herself to the mast and letting it roll, she flew out to meet the band , just three days after first receiving John's message. And she joined.

"A big part of my choice to pursue this was because of the initial synchronicity," Stern says. "They are so talented, and so serious about music. I felt like there is some special reason as to why we're crossing paths."

"We played some covers, which were good," Stern remembers. "But more importantly, there was a level of us all really wanting it to work." Some passes were made at trying established GUAS material, which for the new singer was a hurdle.

"They had these songs already written that I had to fit myself into, which was not a natural ideal for me," she says. "I would do covers if that were the case. I'm a lyrically driven musician; thats a large portion of how and why I'm affected, and in love with music. Music is super personal for me."

She was also not just a little intimidated. "Then, of course, there's the pressure of performing Deirdra's songs," Stern adds. "Her voice is insanely magical. She's so gifted."

Stern quickly proved to be no fluke. For the Ontario neo-punk rocker who was still acclimating a strange new place, a positive outlook was crucial in the first few days. "I kept reminding myself that great things aren't always instant, and anything worth having takes work and even some discomfort," she says. Soon enough, a breakthrough came. The band chemistry was real. "By the fifth jam, we had developed a creative connection," Stern says, and the Thomsen family was finally able to allow themselves the luxury of optimism.

Listening to "Aim," the new Grown Up Avenger Stuff single and Stern's debut, the resulting shift that's occurred is less a rock-band lineup change and more a Dr. Who-style regeneration. Kroner channeled Avenger's rock energy into a soundtrack to her personal inner landscapes. It was a journey that eventually led her to form Chosovi. Ray Stern brings an indomitable Canadian punk-rock optimism, unclouded by politics and a lot of the doubt and confusion that dogs some Americans these days, and she is directing that energy outward.

Like the constantly evolving '70s prog pioneers King Crimson, Grown Up Avenger Stuff brings an atmosphere and approach that seems to defy the kind of turmoil that would kill another band. The group is greater than the sum of its parts, and those who fall into its orbit may bring their own ideas, but they will inevitably mesh into the service of a bigger vision.

Kroner couldn't be happier for her former bandmates and their newest not-so-secret weapon.

"I am overjoyed," she enthuses. "I think Ray is an amazing musician in her own right, and I'm loving what she is adding to GUAS's sound. I mean, if you've seen and heard her, I don't even need to tell you."

"What I am bringing to Grown Up Avenger Stuff is a creative message to be real, be aware, and to be free from fear," Stern says. "Anything goes. And life is beautiful. So love it all!"

Listen to the new Grown Up Avenger Stuff