Rising From The Dead 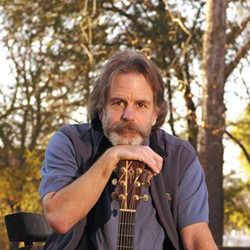 He may be best known as one of the voices and guitarists for The Grateful Dead, but these days, Bob Weir, 60, spends as much time with his band RatDog as he does on world causes. Whether it's getting young people to register to vote or getting information out about the environment, it seems like there's little rest for the Weir-y.

I recently spoke with him by phone from his California home about his political and environmental effort and how that whole jam band thing got started.

I know you stay pretty busy with touring during the year. How many shows will you have done by the end of the year?

"Well, you know, actually we tour as much as The Grateful Dead used to."

You've introduced some new songs over the last year or so -- "Money for Gasoline," "Tuesday Blues" -- do you know how many new tunes you've brought out?

"I don't. I haven't been counting, but there are a couple more that we need to ... basically I need to learn two or three more tunes that we've been working on."

Do you bring them out as you write them?

I talked with you earlier this year and we talked a bit about your process for releasing new music these days -- you do it in a live format and aren't looking at the studio like you used to. Is that the same thinking that it's not the traditional releasing format?

"Well, it's the old style where you wrote a song and then you played it. I guess I told you that we live square in the middle of the file trading demographic so it doesn't make a lot of sense for us to invest the time and money and do a carefully groomed recording when once we've sold one, everybody has it. (laughs)"

I was also wondering, looking at the live avenue -- I don't know how involved you are with the new Grateful Dead channel on Sirius. Maybe that's another outlet?

"That will be, but more for our live recordings, I think ... we'll get around to doing studio recordings as well. We're waiting for Mark to get better and then we'll do a flurry of recording. We have, sort of, a plan for it. We will actually go into the studio. What exactly we're going to do with that is still up in the air." (Note: RatDog guitarist Mark Karan has taken a temporary leave of absence to battle throat cancer.)

How involved are you with that channel on Sirius -- is it just doing interviews every once in a while?

"Yeah, pretty much. I'd like to be more involved. It's kinda fun working with those folks, but I've got a band to feed and all that kind of stuff."

I know you're looking down the road and not where you've been.

I did want to look back for one moment though. I've read in past interviews with you about how The Dead weren't really the "Godfathers of the Jam Band" thing as jamming was around before you.

I wanted to ask, at what point did jamming become a part of your music. Was it there in the beginning, even as far back as The Warlocks?

"Yeah, it was. When I was a kid, I was listening to Miles Davis and John Coltrane. I was, like, 17 and it hadn't dawned on me yet that I could actually step into that world. After a stint -- we had about a two-month gig I think it was in Belmont at a roadhouse when we were The Warlocks. Toward the end of that, and certainly during the beginning of the acid tests, we started stretching tunes out just cause we could and the people on the dance floor seemed to enjoy that. So, we just went there. It seemed like the natural place to go. At first, it was kind of monochromatic -- we'd hammer along in a single key, maybe rocking back and forth between two chords or something like that. Over the years -- actually, in fairly short order we developed an ability for playing short chord changes. At that point, it's best that you have the jazz ammo."

I would think that had to be somewhat intimidating, in the beginning. I would guess there became a comfort level with knowledge of your instrument and comfort with the rest of the guys in the band?

"Ehhhhh ... it was adventurous, but everything we did back in those days was pretty adventurous. We were up for the challenge certainly."

I know a lot of your time is spent with political and environmental projects and groups such as HeadCount. What are some of the groups you're working with these days?