Are you ready for Recess?

Fourth annual festival is a feast for music lovers 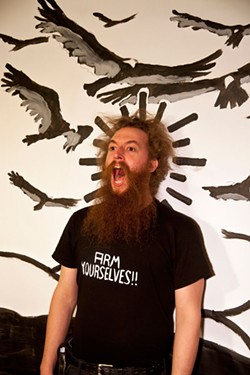 We've all heard (or done) the griping about Charlotte's music scene — typically during a bleary, early-morning drive back from some out-of-town gig by a great band that never seems to play here. That unfortunate scenario illuminates two basic choices — keep bitching or start acting.

Locals Casey Malone and Zach Reader chose the latter path. Fed up with driving to the Triangle, Asheville or beyond to see shows that bypassed the biggest Eastern seaboard metropolis between D.C. and Atlanta, the former roommates booked house shows for a couple of years before conceiving the Recess Fest idea. The inaugural July 2010 event, a one-day affair featuring 14 bands, included five touring acts from the fertile Baltimore scene that were crashing at their digs.

Buoyed by the response, the following Recess Fest (held that winter) stretched over the weekend and incorporated about twice as many bands. Last August, the numbers remained similar, but the festival featured Chicago's Joan of Arc as a sort of cherry-on-top headliner courtesy of local booker Philip Shive.

This year's festival marks an exponential step up. Recess Fest No. 4 has grown into a four-day affair (Thursday through Sunday, July 26-29) featuring more than 70 acts at over a dozen different venues, performance spaces and houses, with N.C. indie legends Archers of Loaf topping the bill Saturday at Tremont Music Hall.

Free from corporate sponsorship and built DIY-style through fundraiser gigs, Malone and Reader say Recess Fest's eclecticism comes from their own varied musical interests and hope for a stronger communal scene. So attendees this year can get their twang on with, say, the Overmountain Men or Pullman Strike; their hardcore thing going with Burglar Fucker or Young and In the Way; have Coma Cinema or Little Bull Lee provide an indie fix; or get their flow rolling with local emcees Forever F.C.

"Recess Fest has always been about trying to help foster a greater sense of community in town," Malone, 24, says. "Each year we have been sort of bleeding things together a little bit more. Punks at indie shows, folk dudes at punk shows. It's a lot about wanting to mesh different groups of people for one solid cause."

Reader's experience at Baltimore's sprawling Whartscape/Artscape festival — and Malone's appearance with Black Congo, NC at the inaugural Hopscotch — provided both inspiration and a blueprint.

Like those endeavors, Recess Fest's agenda also incorporates other arts. Malone and Reader point to an opening night throwdown at Petras that includes plays, monologues and stand-up comedy in addition to music. That echoes previous years' flier contests, water-tank dunk-athons (they don't call it Recess for nothing, folks), Etch-a-Sketch art shows and short film contests.

"The city should be your playground this weekend," says Reader, 24. "We hope people will think back to what recess meant to them in grade school and remind themselves that it's still OK to take a break from work/life/monotony and wild out with a bunch of other people."

With more than 70 acts scheduled for Recess Fest between July 26 and 29, it's not easy to figure out exactly who is worth catching. Here are five quick recommendations from Recess Fest founders Casey Malone and Zach Reader and CL music writer John Schacht.

Whatever Brains (Raleigh/Durham) — "They have that special ability to bring a punk-like intensity to a bill, but their songs are crafted much differently than most punk groups. I saw them play at 4 a.m. at Hopscotch and they played an Alex Chilton cover — forever won over." (Casey Malone)

Forever F.C. (Charlotte) — "These pushin' emcees are grimy, from the hood and each possess strong flows. I put them at Crown Station so it will be the tight, sweaty and head-bobbin' hip-hop show it ought to be." (Zach Reader)

Drag Sounds (Greensboro) — "Really into the sort of stuff they've got going on. The song 'Out All Night for Love' that's on the Recess Fest compilation is great!" (Malone)

Tomahawk Deb (Atlanta) — "It reminds me of really early Brian Eno at times, but I also get a '90s electronica vibe, too." (Malone)