Are owners being too lax? 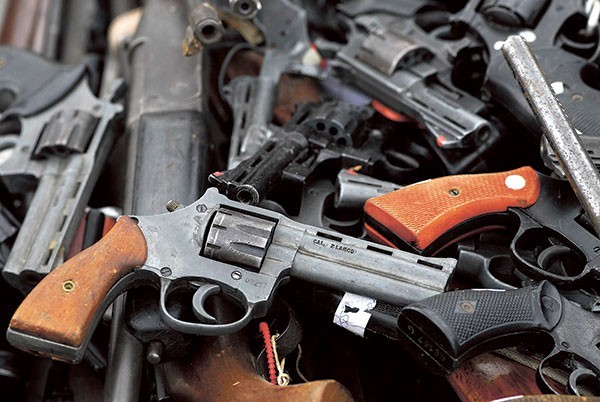 In mid-February, a woman living near Mountain Island Day School in northwest Charlotte calls police after her kids find a Smith & Wesson .38 special revolver while playing in the woods behind her home.

On March 17, staff members at Goodwill on Albemarle Road come across a revolver; the only contents of a purse donated anonymously earlier in the day. March 19: a man steps onto his back porch across the street from Winterfield Neighborhood Park and finds a Winchester shotgun he's never seen before.

March 21: a 65-year-old man finds a 9mm handgun lying unattended in a bathroom stall at McDonald's.

March 22: a woman gardening in her yard in NoDa strikes something hard. She unearths a Charter Arms .38 special from where she believed only plants were growing. Four hours later, an anonymous person turns in a .40-caliber handgun they found lying unattended in an Uptown parking deck.

Guns have become such an ingrained part of our lives in America that reports of this kind are normal. The arrowheads of our modern culture, they're strewn about and forgotten, treated not so much like deadly weapons but as accessories to be left sitting in the car until they're one day needed.

Now, as gun registration increases in Charlotte, so does gun theft, putting hundreds of guns in the hands of criminals and onto the black market, sometimes in a single month.

After counting nearly 100 reports of stolen guns in December 2015, Creative Loafing began mapping each gun that went missing in the first 90 days of 2016, and found that about 2.5 guns have gone missing every day in Charlotte this year. As of April 1, there were at least 221 guns reported lost or stolen to CMPD in 2016, and a map of all 144 incidents in which guns were reported missing shows that the thefts aren't just happening in high crime areas or in any type of recognizable cluster.

Pro- and anti-gun folks disagree — as they're wont to do — on what this rise in thefts means about gun culture in Charlotte and the country. Gun proponents say the increase in gun thefts is proof criminals will get their hands on guns no matter what the laws are, while gun control advocates say the so-called responsible gun owners are at fault for leaving their guns vulnerable to theft without taking more proactive steps to protect them.

John Rudisill, a Charlotte attorney who participates in multiple anti-gun organizations such as Everytown for Gun Safety, says he wants to see mandatory insurance laws for gun owners that would hold them liable for violence committed with their guns, as well as a tax on ammunition.

"The guns are already out there, you're not going to get them back," Rudisill says. "But if you can make it prohibitively expensive to use them, that could help."

Larry Hyatt, owner of Hyatt Gun Store in west Charlotte, says everyone who buys a weapon from his shop — touted as "America's largest gun store" — signs a statement confirming they are familiar with safety devices that prevent theft and also prevent children from getting to a gun.

Hyatt suggests that gun owners use a metal vault with a steel cable when carrying guns in their cars. The device hooks around the passenger seat and makes it impossible for a thief to remove the gun from a vehicle.

"With concealed carry [legal with a permit in North Carolina], you've got a lot of people carrying guns who can't carry them into work, the gym or wherever," he says. "[The vault] is a great way to inexpensively stop the car theft, which is the easiest way for criminals to get a gun."

About a third of the guns stolen in Charlotte in 2015 were stolen from vehicles, and just under half of the gun theft incidents mapped by Creative Loafing this year involved vehicle break-ins, more than those involving home break-ins or guns stolen by an acquaintance.

For Hyatt, however, the term "vehicle break-in" brings to mind something else entirely.

In March, a group of teenagers allegedly tried to drive a stolen car through the back of Hyatt's store, hoping to clear out his inventory, probably with plans to sell the guns on the streets. They didn't make it into the store though, as he had the building's back door reinforced 10 days earlier — in the exact spot the thieves struck — after hearing about similar break-ins happening around the country.

"It's a new type of break-in where they send a group into a business to case it, go steal a car and come back at night to ram the vehicle through the front or back door," Hyatt says. "Six to 10 people will run in, grab the guns and put them in a getaway car. They can do it in such a short period of time that the police can't catch them. It's not just in the Charlotte area, it's happened in Chicago, in Houston. It's an epidemic."

It's unclear whether stats around the country confirm there's been a rise in gun stores being targeted with that specific type of break-in, but Hyatt's concerns were certainly justified. He said in his store's 60-year history, people have tried to break in with a long list of techniques, but that was the first time it has been rammed by a vehicle. He now suggests that all gun store owners have law enforcement visit their stores and show them their vulnerabilities.

He also suggests gun owners buy safes for their homes in the event that someone does target their residence, either specifically searching for guns or not. For one couple in northwest Charlotte, a safe paid off when they were targeted in February by a man who was in their home doing subcontracting work just weeks earlier.

Anne Hanson said the man who was later arrested for breaking into her and her husband's home had been there just two weeks earlier on a job. The man returned and stole thousands of dollars worth of jewelry and silverware, but was not able to get to her husband's large gun collection, as he had the guns locked in two separate safes.

The thief did make off with multiple cross bows and some pellet guns her husband had lying around, but she said the take could have been much worse. While the bows and pellet guns were later recovered at a pawn shop, a Glock pistol her husband had out to make repairs to was never found.

"We were targeted, and he knew exactly where he was going when he got inside," Hanson said. "Thank God [the gun safes] were locked."

Although an increase in gun thefts doesn't always correlate with rises in gun ownership in Charlotte, the most recent spike is coinciding with a flood of requests for gun purchase permits at the Mecklenburg County Sheriff's Office (MCSO) that's created a backlog at the county clerk's office.

While gun ownership has spiked in the past as a predictable — if unjustifiable — reaction to Barack Obama's election and reelection, the recent increase in permit applications began as a response to a terror attack and has yet to slow down.

According to Tamara Rhode with the MCSO, applications began flooding into the office following the attack by extremists in San Bernardino in December. Rhode said there are currently about 2,600 permit applications in waiting at the clerk's office, and the number isn't decreasing.

"We might get 80 out and put 80 more in," Rhode says. "The number we're getting back from the clerk's office is as much as the applications we're receiving every day so the number isn't going to go down."

She said that while MCSO does participate in gun safety speaking engagements that may touch on theft prevention, it's up to gun sellers to educate people on how to make sure their gun remain theirs.

Hyatt said he's fine with that, because he supports the use of any device made to impede a thief.

"It's so easy to buy a safe, all you have to do is learn the combination," he said. "It's too easy for you not to do it, and a safe costs less than one nice gun, so somewhere along the line, instead of a gun you need to buy a safe."