Local members of the clergy joined three former inmates gathered in uptown Charlotte to speak out against the use of solitary confinement in Mecklenburg County, one of multiple issues that have dogged Sheriff Irwin Carmichael in the lead-up to next week’s primary election.

Brandy Hamilton, 30, recalled an experience from 2016 when she said she was placed in solitary confinement for ignoring orders to stop singing gospel songs while in custody at Mecklenburg County Jail. This goes against Carmichael’s repeated claims, including to Creative Loafing in March, that solitary confinement is only used in cases where inmates become violent with guards or each other. 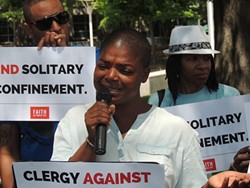 Hamilton said she was in between medications for bipolar disorder at the time, and doesn’t remember some details, but does remember the Direct Action Response Team rushing into her cell after. She said that when her mother came to the jail, she was told she couldn’t visit Hamilton because she was “in the hole.”

“It was for not obeying an order, but I was singing and I wasn’t violent and I had harmed no one,” Hamilton said. “And also, I was experiencing a mental health situation, a crisis some would consider it.”

She said she does not remember anyone checking on her mental health before she was placed in solitary confinement.

Hamilton said she confronted Carmichael at a recent panel discussion at Johnson C. Smith University when he stated that solitary confinement is only used in incidents involving violent inmates.

“People shouldn’t be thrown in there for any reason, I believe, but [especially not] just for any little reason, like singing or whatever excuse they give to lock up a person in a cage within a cage with no human contact. It’s really crazy.”

In a sit-down with Carmichael in March, Creative Loafing asked him about the use of solitary confinement on youthful offenders.

Two other former inmates who stated they had spent time in solitary confinement in Mecklenburg County jail also shared their experiences, followed by members of the local clergy including Rev. Corine Mack, president of the Charlotte NAACP, and Rev. Donnie Garris of the United Missionary Baptist Association. 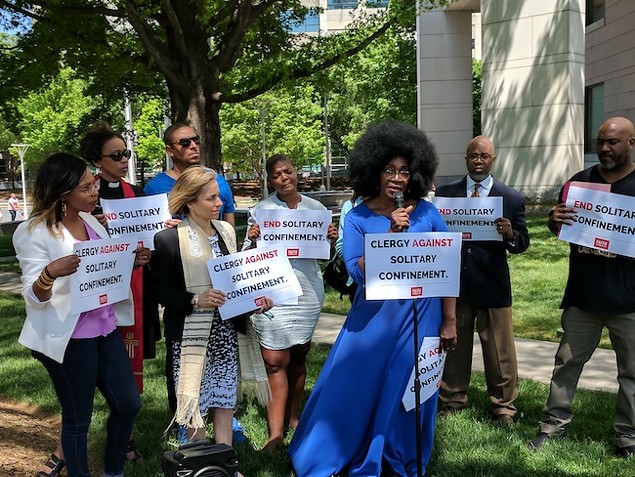 Speaking from the courtyard of the courthouse on East 4th Street, Garris pointed out that there were inmates going through solitary confinement just across the street from where he stood.

“In my church, we would say that what is happening in solitary confinement, we would say it’s a sin and a shame,” Garris said. “It’s not only a shame in that it’s something to be pitied or regretted or embarrassed, but it’s also a sin in the way that we inhumanely treat a fellow human being.

“Solitary confinement isn’t rehabilitating, it’s damaging. It’s crippling people mentally and releasing them back into our communities as men and women who are forever changed.”

After Garris spoke, Rabbi Judy Schindler of the Stan Greenspon Center called on the county to immediately end the practice of solitary confinement.

"We are calling for change in the policy and practice that allows for solitary confinement," Schindler said. "No matter what you call it, and our sheriff’s office has many names for it, it is inhumane, it is psychologically damaging. It is not the jail we want to have or the city we want to be.”

« Listen Up: The Wormholes Space Out…  |  Was That a Topless Woman in Center… »