Blood sprayed into the crowd as spike-covered aliens severed human heads onstage at Charlotte's 4808 Club. The aliens then mock-ejaculated, spewing forth what appeared to be bodily fluids. It was shock-art, for sure, but to Charlotte cops circa 1990, it was also illegal. 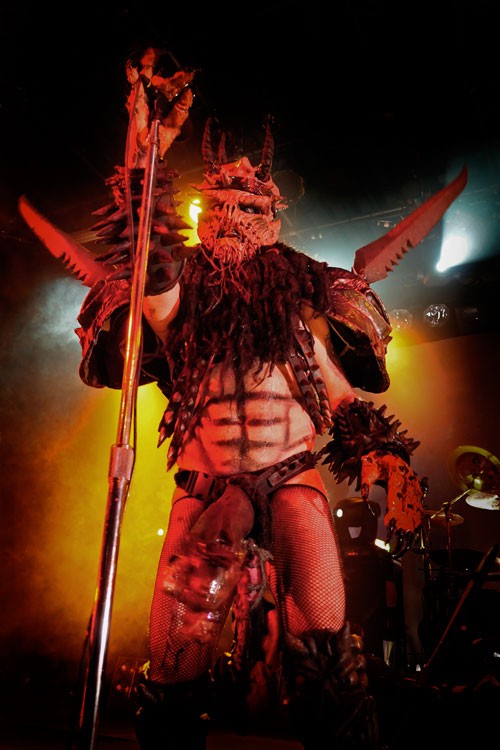 Following the publication of a Music Menu item in Creative Loafing, Charlotte City Police Vice Unit officers showed up at the 4808 for a concert by Virginia thrash metal band Gwar, whose name stands for God What an Awful Racket. After the theatrical rockers finished their set, lead vocalist Oderus Urungus (real name: Dave Brockie) was arrested on charges of disseminating obscenity, and club owner Michael Plumides was charged with the same thing along with some misdemeanor violations. The arresting officers also confiscated a two-and-a-half-foot-long rubber penis that Urungus refers to as the "Cuttlefish of Cthulhu."

CL music editor Fred Mills' 1990 story included all the glorious details: "It was mock violence, mock sexuality ... so grotesquely cartoonish that only someone without any knowledge of Gwar's theatrics ... could construe them to be very offensive, much less of a prurient nature."

Charlotte club performances have not often grabbed national headlines. But this one involved thrash metal, the police, a confiscated rubber penis, and most of all, suppression of art during a time when North Carolina's infamous Republican Sen. Jesse Helms had made a national issue of it. Helms, who also would bring New York City performance artist Karen Finley into the national debate, wanted to slash government funding of art. Looking for the perfect N.C.-based story, the national media picked up on the Gwar arrest and the event became the stuff of legend.

"We were kind of asked by the club to tone things down before the show, but of course we ignored them," Brockie recalls today. "We were trying to provoke the situation. Why would you create a band like Gwar if you're not trying to provoke people?"

With censorship at the forefront of news coverage thanks to 2 Live Crew and Tipper Gore, Mills says CL had already been covering censorship-related issues, but the Gwar incident made the paper's staff more cynical about Queen City prudishness.

"Loafing expressed outrage and dismay at the actions of the ALE agents, especially because they arrested the 4808 Club owner along with Brockie," Mills recalls. "We already knew that the owner had rubbed the authorities the wrong way by booking all the 'unsafe'-type acts that other clubs wouldn't book [metal, rap, hardcore punk], so our feeling was that he had been in their crosshairs for some time and the Gwar bust was a thinly veiled form of legal harassment."

Mills remembers the CL staff at the time being extremely proud of the coverage, as well as the subsequent interviews that he and then-editor John Grooms gave to Rolling Stone and MTV, helping to put CL's reporting in a larger spotlight.

A Canadian citizen, Brockie entered a plea bargain in the case — saving money and avoiding possible deportation — and was banned from North Carolina for one year. The arrest and subsequent trial inspired Gwar's third album, 1992's America Must Be Destroyed, and the Grammy-nominated movie Phallus in Wonderland. Though the band always expected something like this to happen, especially in the early years, the incident was the only time Brockie has been arrested for something relating to Gwar.

Gwar stayed away from N.C. for two years, and didn't return to Charlotte for another four or five, but the band never encountered any other problems in the state.

"The legacy of the incident has definitely endured over the years and it's one of the strongest Gwar legends," Brockie says. "Getting arrested for making art is pretty funny. The weirdest part about it to me is that somewhere in Charlotte, in some lockup facility, there is the Cuttlefish of Cthulu — the offending member, if you will — sitting in an evidence box."