Harry Potter and the Deathly Hallows - Part 2: Magical | Reviews | Creative Loafing Charlotte
Switch to the mobile version of this page. 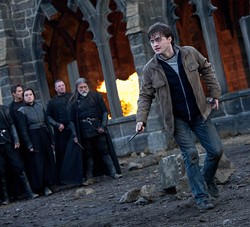 Right out of the gate, let's make it known that Harry Potter and the Deathly Hallows - Part 2 doesn't suffer a precipitous fall as many final chapters are wont to do. Nobody exiting the theater will be recalling sour memories of, say, The Matrix Revolutions or X-Men: The Last Stand or any other heavily hyped send-off that left the faithful feeling angry and betrayed. Rather, a series that has gotten it right since Day One has maintained its integrity and commitment to quality to the very end, and appreciative audiences will leave with a heady mix of jubilation and remorse.

Is that laying it on a bit too thick? You tell me. The adaptation of J.K. Rowling's first Harry Potter novel hit movie theaters back in 2001; all told, there have been eight movies over an 11-year span, enough of a chunk of time to serve as the cultural touchstone for an entire generation (much as the original Star Wars trilogy was to mine). Even those of us ahead of the growing curve have taken pride in the pleasant manner in which the series leads — Daniel Radcliffe as Harry Potter, Rupert Grint as Ron Weasley and Emma Watson as Hermione Granger — have sprouted from adorable little moppets to striking young adults. As for the supporting ranks, who among us hasn't thrilled at seeing the cream of the British film empire turn up in richly defined character roles, whether for one film (Kenneth Branagh) or for all eight (Maggie Smith)? (And don't fret about those who didn't make the cut: Most of them popped up in the Lord of the Rings saga.) We all have our favorite Potter lead (I always liked Hermione's spunk and smarts), favorite Potter ally (Robbie Coltrane's Hagrid, a perpetual delight), favorite Potter foil (Alan Rickman's wickedly played Severus Snape), favorite Potter student (Evanna Lynch's out-there Luna Lovegood), and so on.

Similarly, everyone has their favorite Potter film, and for many viewers, this final entry will be that movie. For me, the entire series works so well as a whole, as one continuously flowing entity, that it's difficult to single one out (forced to choose, I guess I'd go with Harry Potter and the Goblet of Fire). To that end, this last chapter is no more and no less exciting than many of the past pictures, even if it does contain the climactic life-or-death match between Harry and Voldemort (Ralph Fiennes). To reach that point, we pick up where Deathly Hallows: Part 1 trailed off — with the death of a diminutive sidekick of Harry's — and continue with the three friends' quest to find the Horcruxes that will allow them to possibly defeat Voldemort. It's also revealed that Hogwarts is now under the control of Snape, with Death Eaters standing guard outside the castle perimeters. Harry knows that he has to break into the school, a mission that will ultimately provide some surprising answers to the many questions still plaguing him.

Oddly, this is the shortest Potter film of them all (130 minutes), which means that many regulars are only given a fleeting scene or two before being dismissed to their trailers. And while there's a beautiful moment at which to end the film — a magnificent shot, pulling up and away — it's followed by a finale that feels protracted and unnecessary (though I understand this was also in the book, so there it is). And one word of warning: Do not see this in needless 3-D, which darkens many of the scenes and often makes it hard to tell who's where doing what to whom. The first seven Harry Potter films looked just fine without this cash-grab gimmick, and there's no reason not to catch this latest installment under the exact same conditions.

Even through the 3-D fog, the visual effects are obviously up to the generally high standards, but as is always the case with this franchise, the interaction among the characters is so compelling that technical artistry places second when tracking this series' merits. More than ever, Radcliffe is asked to take control of the screen as his boy wizard faces his own demons before finally facing Voldemort, and the talented thespian is up to the task, holding nothing back in an ofttimes ferocious performance. Fiennes again oozes reptilian menace, while Rickman remains a high point as he deftly handles the saga's most complex role.

Beginning as a magical mystery tour for kids and ending as a mature saga about solidarity and sacrifice, the Harry Potter film franchise has spent a decade entertaining global audiences of all ages. Its run may be over, but like family-film classics from the past, this is one series that's almost certain to hold future generations equally spellbound.