Heirloom offers a taste of place

If you build it, will they come? 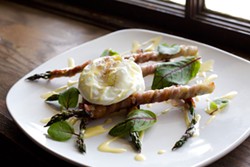 At first I didn't notice the sweep of Béarnaise sauce beneath the stalks of asparagus hugged by a thin strip of tesa, house-cured Italian-styled bacon. The fresh lemony taste is everything I look for in a spring salad — a perfect meld of a farm-fresh poached egg, young greens and melting pork fat.

I found this at Heirloom Restaurant, a locally-sourced 106-seat spot in the Coulwood neighborhood. Chef and owner Clark Barlowe opened Heirloom last February in an area devoid of chef-driven restaurants — or really any restaurants at all. Coulwood lies in that northern triangle defined by the Brookshire Freeway and I-485, a place dotted with fast food and fast casual eateries, and red-brick houses on large tracts of land.

The current business model for many chefs, especially young chefs, is the food truck to brick-and-mortar paradigm. Famously, Portland chef Andy Ricker did this with his Pok Pok. It's a gutsy move to open a locally-sourced eatery in a restaurant desert. The hope — in this day of social media — is that if a young chef opens a restaurant in an out-of-the-way place, folks will spread the word and come.

Barlowe, a graduate of Johnson & Wales University, is following his passion and the current national trend of embracing all that is local. But even though Charlotte has a growing number of local advocates, the city, on the whole, has yet to overcome its lack of food confidence and embrace its farm roots and the foods that grow abundantly here.

Barlowe has worked in critically acclaimed restaurants, including an internship at Thomas Keller's The French Laundry in California and Ferran Adrià's now-shuttered El Bulli in Spain. He has also appeared on the Food Network's television show Chopped. To counter the location challenge, Barlowe is hosting a series of local artisan dinners.

Currently, Heirloom is only open for dinner and weekend brunch. Most of the ingredients used are sourced locally (both Carolinas). This includes beer and wine. If you are not familiar with North Carolina wines ­— and this list is exclusively North Carolinian — I have two words for you: Cabernet Franc.

The menu, which changes daily and is available on social media, offers familiar classics: steak and frites, baby back pork ribs, and pasta and meatballs. When they work — like the "chef-foraged" walnuts with a medley of sliced beets splashed with a sorghum vinaigrette or the gotta-have-it asparagus salad — it is due to the impeccable ingredients themselves.

On another salad, Barlowe plays with technique and gives a nod to El Bulli and flecks a bed of arugula with perfectly shaped pea-sized balls of sour cream. And some of the assiduously-sourced ingredients are worthy of note. This salad also features Atlantic sturgeon caviar farmed in Happy Valley, a mountain town up the road from Barlowe's hometown of Lenoir, North Carolina. I know, right? Appalachian caviar.

But not all is well. Less interesting are the entrées with schmears on the plate. The line-caught tilefish enlivened with a chili fish sauce was weighted by a wan, listless turnip puree base. The flavor of the pan-roasted chicken sank in the overwhelming saccharinity of a sweet potato puree that even sautéed arugula could not save.

With a pastry chef devoted to the dessert list, I was surprised to see only two offerings, but chef Joselyn Perlmutter's tasty treats will not disappoint. Desserts are so Southern — and I like that. Besides, what's not to like about delicate shortcake biscuits with gorgeous strawberries?

Barlowe's menu is a lot cannier than his décor. Thumbs up to the bee hives on the metal roof and the elevated small gardens in the front, but the outsized dining room has neither an endearing nor a modernist appeal. Yes, rough-hewn barn wood is wainscoted, but overhead the ceiling is a haphazard mix of woods, fluorescent light strips and other lighting. Oh, and it'll cost you. Entrée prices range from 20 to 30 bucks. A tasting menu is available as well. Will people find their way up there? That's the question.