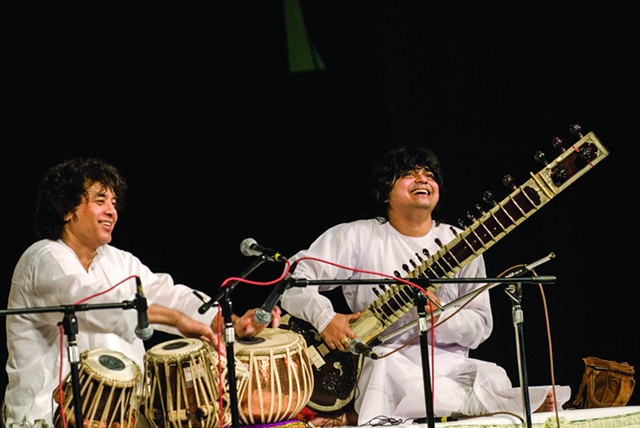 There are times you can tell when musicians performing live are so in tune with each other, they seem telepathically connected. Jazz musicians come to mind. Another is a gathering of trained Indian classical musicians. In India, there are two prime iterations of classical music. Carnatic music is the Southern classical tradition, while Hindustani music is the North Indian classical tradition. Hindustani musicians have performed in an intuitive, improvisational manner for centuries, albeit with the foundation of ragas. They fuse this with their rigorous training to perform while filling in the spaces as needed, adding hues and subtleties. These ensembles are small, generally duos and trios, instrumental or with a vocalist.

Showcasing the traditions of Hindustani music is one such duo, tabla legend Zakir Hussain and sitar player Niladri Kumar. They are slated to perform in Charlotte at CPCC's Halton Theater on Oct. 9.

Hussain is a pleasure to chat with, patiently giving answers to questions that have likely been asked hundreds of times in the past. He is, after all, a legend in Indian music, a global music troubadour steeped in traditions but willing to take his music and tabla into myriad genres and multiple possibilities. I asked him to talk a bit about this upcoming performance during a recent interview. He said, "This will be a detailed classical performance. I don't get to do many performances like this so it's nice to be able to have this opportunity. Let's see if I can still keep up with these young punks (laughs, lovingly talking about Niladri Kumar)."

Niladri Kumar is a 5th generation sitar player, an astute proponent of the instrument, and able to play at speeds that would make an electric guitar god's jaw drop. I asked Hussain about this, and if that's what he meant by keeping up with young punks. "Yeah, to put it mildly, he is 2 point something gigawatts of power. There's power there but also great attention to the traditional requirements. He's a very special combination of traditional values and their validity in the modern world of music."

Sitar is a complex instrument, requiring years of rigorous study with a dedicated guru. Niladri Kumar is one of a small crop of young sitar players fully adept at its meditative power as well as energy. 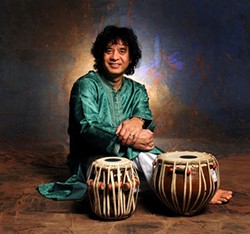 Hussain has been performing and recording since the early 1970s with myriad musicians and delved into numerous genres. He has jammed with the Grateful Dead, recorded and toured with a colorful cast including John McLaughlin, Bill Laswell, Bela Fleck, Mickey Hart, as well as jazz and Celtic musicians, African musicians, Western classical orchestras, and of course, many luminaries of Indian classical music from the legendary Ravi Shankar to young players like Kumar. Hussain can weave in and out of any genre of music, but he shines when he returns to traditional Hindustani music, the elder statesman guiding the young lights.

So for a musician who has dabbled in all sorts of musical conversation and experimentation, what does he feel is his biggest musical challenge? He said that would be Western classical music.

"The reason why I say that because jazz and Indian music are somewhat distant cousins. They have elements of improvisation and therefore spontaneity plays an important role in the musical expression. In that way you are somewhat on familiar ground. If you understand the language of the music you are interacting with then you can speak the language and are able to fit in more easily than you would with music that is totally opposite. So when you think about Indian classical music as an improv form of music and western classical music, which is a fixed form of music and has an element that Indian music does not have, which is harmony and counter point where four notes are played at the same time. And then you suddenly end up with a 95-piece orchestra and you have to figure out that you are not just interacting with one or two musicians who are just as ready to be spontaneous and improvise in the musical form you are connecting with."

Niladri Kumar is also versed in playing with numerous genres and has invented his own instrument called the Zitar (an electrified sitar), although he will only perform with the sitar for this concert.

Sitar and tabla are the sound of the cosmos. This is a meeting of telepathic minds, a veteran and a young punk. Listeners will bask in their convergence.