When Los Angeles promoter Lamont Leek brought his "I Miss The Old Kanye" live music series to Charlotte last Saturday, local hip-hop and R&B fans probably noticed that the bill featured Queen City artists like rappers Nige Hood and Raheeme, R&B singers Cyanca and Will Wildfire and others — but they may have missed the show's other local connection. Charlotte-based music platform Disctopia partnered with Leek and helped him locate the cream of the Q.C.'s musical crop. So if you caught the show and enjoyed the performances, you have Disctopia's founder Patrick Hill to thank. 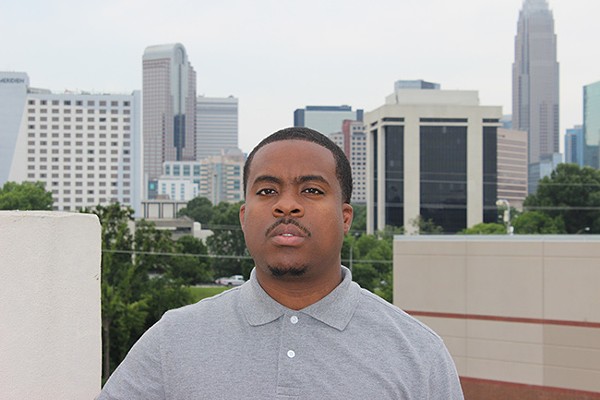 Hill, who launched the platform at A3C Hip Hop Festival in Atlanta two years ago, says his relationship with Leek goes back to those early days. "Our site was new, " Hill says, "and we wanted to do an introductory indie showcase." So Disctopia partnered with Leek on a successful show in L.A. After the gig, Hill talked to the performers to get their input on what they'd like to see in a music platform.

"I always thought that most indie artists want to get paid, but that didn't turn out to be the case," Hill continues. "That's the second thing that they wanted. The first thing they wanted was to be heard."

Today, that's one thing that cuts Disctopia loose from the pack of other music platforms, such as Spotify, iTunes or Bandcamp. Hill and his four-person staff are committed to getting their performers in front of an audience. "Within a short time period we've gotten about 150 artists on the platform," Hill says, "and a lot of them have already performed for us two or three times."

Creative Loafing: What inspired you to launch Disctopia?

Patrick Hill: I graduated from Livingstone College in Salisbury in three years. Then I went to the University of North Carolina Charlotte and got a master's in information technology. I started working at Bank of America — the common transition for IT guys. Then one of my friends came over to my house and said, "I'm ready to make this new album, and I need you to burn me some CDs."

I said, "Burn you some CDs? I can, but there's a better way to get your music out." I offered to make him a website, which would let people download the music from his site. He said OK, but he still wanted me to burn the CDs, so we did both.

This was seven years ago. Streaming wasn't as popular as it today, and people were still buying CDs. People had just got into iTunes and downloading. So that's when it hit me like a lightning bolt. I realized we should just make a platform for everybody. This was before aggregators like Tunecore and DistroKid. I tried to convince people that everyone was going to be downloading and streaming media files, but no one believed that would be the future. It was still a fairly new concept seven years ago. I just put the concept on the backburner, but more and more ideas kept coming up for it. So that's where the original concept came from — my friend asked me to burn his CDs, which I thought was a complete waste of time.

We officially launched two years ago when we got the [Disctopia] website up and running. We didn't launch our Android and iOS apps until springtime last year. I actually applied to push the app in November 2016, but Apple denied it and it took me five months to get approved. It took longer because we were allowing artists to get paid directly, and if you're familiar with Apple's policies, they take 30 percent of everything no matter what it is. They don't care who you are. They don't care if you're Netflix. If you sign up on their device, they're taking 30 percent. So we had to figure out a way to counteract that. It took us a while to recode it.

What does your platform do for the artists who've signed up with you?

We try to be 100 percent dedicated to the artists. We don't take any commissions. We pay them two pennies per stream, the highest out of any platform, and we allow them to upload any of the three files — FLAC, mp3 or WAV. There are millions of people on Spotify, while we have about 5,000 users, but all 5,000 of those people are engaged. They are looking for people like our artists. I can guarantee them that the millions on Spotify are still looking for Drake.

We charge [each artist] $9.99 a month, which covers our technology costs. That's it. They keep everything else. They can make a million dollars on the platform for just $9.99 a month. From a technology standpoint, the business model is set up like Dropbox. If you want a breakdown of the business model, just think of it as if eBay and Netflix had a baby. We're the only platform that allows artists to buy and sell. We're releasing video files later this summer. So if you want to do music and video you're going to be charged $17 to $19. We haven't really nailed that price down yet.

Do you help the artists understand how to get themselves heard?

We have a very aggressive plan for adding other artist's features that they need, like copyright information. A lot of artists don't even know that you can copyright your song for $25 on the trademark site.

We also have an archive of 50 to 60 articles that provide information for artists — just simple stuff like how to shoot a music video, how to get your Google analytics for artists, how to promote yourself, how to pick band names. It's just a pure resource guide. That's one thing that we're doing for the new app update — adding some more resources, because people don't know what they don't know. We're really all about the artist. We started partnering with the Lamont Leeks of the world, because the biggest thing for indie artists now is they need to be seen.

The current environment for digital media, period, is crowded. There are billions of songs on iTunes and Spotify now. The only thing that will make you stand out is being on a stage. That's the last frontier. Labels don't market artists like they used to, because artists can market themselves now. There's Twitter and Instagram, and artists can buy their own Facebook ads. You don't really need to hire a studio to get a good quality-sounding track. You can do all of this stuff. The only thing a record label still does well is artist development. They teach artists stage presence, public relations and things like that. We're getting into that space by providing artists with an environment to perform in.

What performance events do you have coming up?

Right now, we're working on a festival for early spring here in Charlotte. We want to bring Charlotte a real and true indie festival, not something catering to just one genre. It would be a festival like you see in upstate New York or out west where they have three or four genres spread out over two and a half days. We're also currently working on a summer tour — some small showcases between here, Charleston, Washington, D.C., and New York.