When you think about the Afrofuturist art movement, what immediately comes to mind?

For many people, it's a cosmic aesthetic involving spacecraft, intergalactic travel and perhaps even an alien or two. For Janelle Dunlap, it goes deeper than that.

Last year, Dunlap began exploring Afrofuturism as a new angle from which to approach the work she's been doing around gentrification and displacement. She thought of her great-grandmother, Ida DeShields Moore, part of the first class of black registered nurses to work in Good Samaritan Hospital, the first private hospital in North Carolina built exclusively to treat black patients.

"For me, the original Afrofuturists were Southerners; Southerners that escaped slave plantations, who left during the Great Migration to create a new life for themselves and their families," said Dunlap. "I started thinking about myself as the descendant of an Afrofuturist. It's not necessarily jumping in spaceships, but when you think about what Afrofuturism might have meant to someone back in the '30s, for a black woman in the South like my great-grandmother, Afrofuturism was really getting a college education," she continued. "It was thinking of her descendants, her daughters' daughters being graduates of universities."

Dunlap's thought process was inspired by her trip to Time Camp 001, a two-day workshop hosted by Black Quantum Futurism in Philadelphia in October 2017 that explored time, alternative temporalities, time travel, and temporal shifts from various frameworks, disciplines and cultural traditions, according to the website. 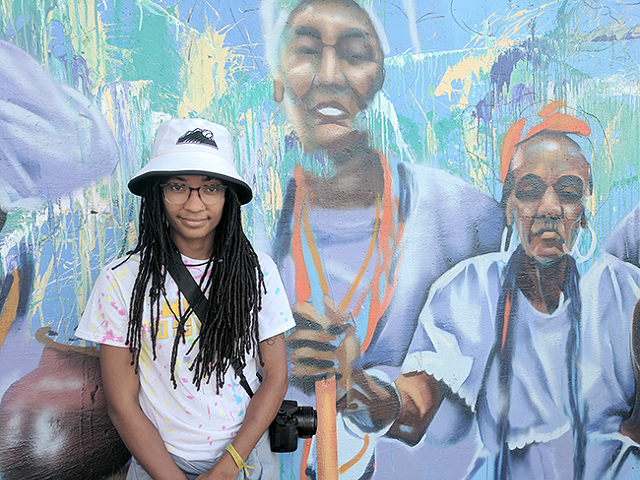 When Dunlap returned to Charlotte, she learned that her fellowship with the League of Creative Interventionists would be expanded for a second year and her funding increased. She got in touch with BQF and began planning Time Camp 002, a continuation of the Philly event that would focus on reclaiming the time of her ancestors with an Afrofuturist focus. The event will take place between Oct. 6 and 7 at Goodyear Arts in Camp North End.

I met with Dunlap while she worked on another LCI project, a sprawling mural called Manifest Future that she's been working on with fellow artists Sloane Siobhan and Georgie Nakima in the parking lot of the former A&P Grocery Store across from Mosaic Village in west Charlotte. We talked about Time Camp, the spreading popularity of Afrofuturism in Charlotte and why science and art aren't as separate as some may think.

Creative Loafing: What was the experience at Time Camp 001 like?

Janelle Dunlap: It was a mixture of workshops and performances. Think about something like a Bla/Alt [Music Festival in Charlotte] with workshops and with a more specific focus on something. So this focus was on time and all aspects of time. It wasn't necessarily a huge emphasis on Afrofuturism, but I thought that it was important if I were to bring it down to Charlotte that it have that, because essentially that's what it is.

And I think that people have a misconception about Afrofuturism just being technology-focused or being heavily focused on aesthetics, when it's actually a practice.

How quickly did you realize you wanted to bring a Time Camp to Charlotte?

I think it was probably at the end of day one, and I was journaling and I had an epiphany that the connection for me with Afrofuturism was that I needed to move away from focusing solely on gentrification and displacement, which has been a subject area that has been the focus of my work for a year and a half. I was at a point where it was odd because I was frustrated because I felt like I wasn't getting supported by the institutions I was working with. Sometimes talking about gentrification, there's a lot of hopelessness in it. So I needed to figure out how could I bring myself out of my own frustrations with my work, my art, and really project myself into the future.

When I started to really pull it all together was when, luckily, my fellowship with the League of Creative Interventionists got extended for a second year, which was huge. We were the only chapter to get a second-year extension, and from what I hear that was due to people seeing what we were doing. People kind of roll their eyes at social media making an impact, but it's really the thing that got us [an extension], because people were watching. They may not have been liking, but they are always watching.

What inspired the themes you'll be bringing into this year's Time Camp?

I thought about a conversation I had with Judge Shirley Fulton, who's the first African-American female judge in the state of North Carolina. She shared with me her perception of what's really caused gentrification, and it was that we've lost sense of home because we're chasing concepts of success that existed outside of our communities. We went to the suburbs, or we sold our grandmother's homes, or we left these neighborhoods to decay essentially on their own because there was no longer a black middle class, so she said, "What we really need to do is reclaim our neighborhoods." And then learning more about her, that's essentially what she did with Wesley Heights.

It just kind of came to me, "Alright, so the theme has to be reclamation." She was really the one that inspired that. Because I understood, I got it. I've seen it happen and I'm watching it happen to my grandma's neighborhood in Spartanburg, [South Carolina]. I've seen it happen to my godparents' neighborhoods in the south side of Chicago. People just get this concept that success means distance and isolation in the suburbs, and that's kind of like a trick I feel that was pulled on us.

So I thought about what is it that I'm trying to reclaim, thinking about time, Time Camp. I was like, "So maybe that's it, maybe that's how I pull Time Camp here, for one of the [LCI] projects be Time Camp and I'm reclaiming time. Then pulling in this whole concept of Afrofuturism and sharing and expressing all the different forms that Afrofuturism exists in.

It does seem like Afrofuturism has been popping up as a theme in more arts events around Charlotte recently. Why is that?

It's odd. Like, I don't want to take credit, of course, for bringing Afrofuturism here, but I did notice when I started mentioning it, it started to pop up or sow into other brands, which I'm really grateful for, because Afrofuturism is a brand and it's a virus that needs to spread.

But we have to understand, we cannot use it solely for capitalist gain. It's a philosophy. The intention behind it also needs to be elevation. It needs to be to inspire vision and not just get money or party. I'm protective of Afrofuturism in that sense, because it's not just a commodity. 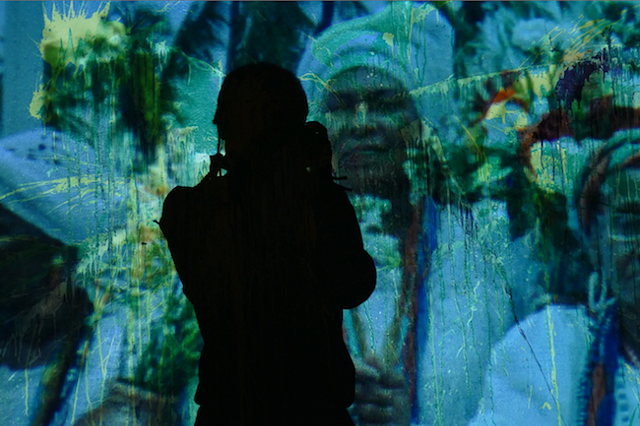 You've got science workshops booked for Time Camp, which you just don't see at arts events. Tell me about that.

There's this dope person, she's from Denver, Kendra Krueger, and to this day, I haven't heard Neil DeGrasse Tyson or Bill Nye break down quantum physics to social justice as well as Kendra has. She was able to break down the science behind entropy and portals and help connect that with an everyday experience so that people understand science in a different way.

People usually see art and science on two different sides of the spectrum, the subjective and the objective. Would you like to see folks working to bridge that gap a little more?

That's why I wanted to collaborate with people like Georgie, because she's a scientist, and you see how the science is expressed in her art.

What I really want to see in Charlotte, I need people to stop saying they're not creative, or that they don't have a creative bone in their body. Human beings, we've been creative in our environment. You create the paths you take in life. You create things to make your life easier. So it might not necessarily be in a visual sense, but everyone is creative.

What I'm hoping the embracing of Afrofuturism or the arts does in Charlotte is really to awaken that creative vibration in people. And I hope that things like Time Camp — the presentations on quantum physics or the facilitations on poetry, or even creating a new Bible, which is what Pierce Freelon [of Blackspace Durham] will be talking about Sunday — I hope that provides access for people to understand that everyone is creative, but you have to have your vision inspired in you, though. Oftentimes we don't have enough in Charlotte to inspire vision.

What else can we look for coming from you after Time Camp?

Well I guess this is kind of a spoiler alert, but I'll be doing more of this work in collaboration with the Arts & Science Council in the next couple of months, with a primary focus on west Charlotte. Public art, museum art, a little bit of historical context but with a Afrofuturist lens. So that's coming soon to the Levine Museum, Johnson C. Smith and ASC.