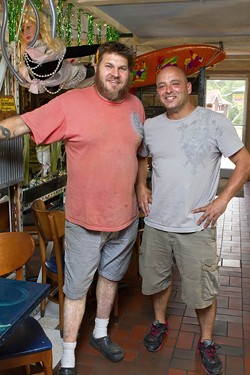 "Don't ask me anything about years or times or dates, because I don't know them," K.C. Terry warns me as we sit down at the recently opened Krazy Fish (2501 Central Ave.), which features a fusion of Latin, Asian, and Southern flavors in its menu offerings. He continues: "I don't know when anything started or happened — I just know certain details. That's just how my life is: Shit is just randomly happening to me all the time and I deal with it the best I can." It's best to let Terry tell his story the way he remembers it. You'll have your chance to shoot the breeze with him June 11, the day of Krazy Fish's grand opening party.

Creative Loafing: How'd you get involved in Charlotte's restaurant scene?

K.C. Terry: I'm originally from Long Island, N.C., a small community at the top of Lake Norman. I was raised to run a business, but I just wanted to move to the city and get a job. I was going to come here and make enough money to move to New York some day, be a comedian and an actor. I started off as a waiter at TGI Friday's. Charlotte used to have the worst food; back in the day, TGI Friday's was one of the best places to go eat here. I then went to work at Lupie's Cafe and that's when I thought, hey, it's not that hard to run your own business. I started to figure out that as long as you don't do drugs, you can pretty much do anything, because that's where all your money goes otherwise. Just don't be a druggie and you can make it.

Anybody ever tell you that you look like Zach Galifianakis?

I don't know who that is. I'm not even into the acting/comedy thing at all anymore. I have terrible stage fright, so my acting aspirations didn't work out very well. One time I went on an audition over on Monroe. The next morning I came in, I was like, "How'd I do?" and the lady's like, "Don't move to New York just yet, boy." But I don't even watch comedies anymore; I think I find everyday life much funnier.

You ran one of Charlotte's most memorable restaurants, Fat City Deli, in NoDa. Has the neighborhood changed from when you first moved there?

I didn't like NoDa from the time I moved. Fat City was in north Charlotte — there was no NoDa: Noda came to Fat City. Anyway, I moved there because it was the Wild, Wild West. It was a neighborhood of leftover redneck workers. It was like a redneck ghetto. All these people worked at a factory back in the day, but they stayed there when it closed because they owned their homes. It was cheap there. Nobody bothered you. We blew up cars in parking lots and nobody ever came.

How did you fill your days between Fat City closing and Krazy Fish opening?

Riding motorcycles and partying. I bought seven motorcycles one afternoon on eBay, in 30 minutes. I didn't mean to win 'em all — you don't win 'em all! You bid on seven motorcycles, maybe you win one. I'd bid on others and lost every time. So I bid on seven motorcycles and won all seven. I crashed a bunch of them. Not in one afternoon, though. It really hurts to crash a motorcycle into a car; you can't do that more than once a day. I hit a car so hard once that my helmet split in two. It's very amazing I'm still alive today. Not because of the motorcycles — I've done some crazy stuff. I've gone to Mardi Gras nine times. I'm going to have my liver re-introduced to new stem cells and start all over again. Rock it on out one more time.