Keeping it unreal: Inside the mind of artist Martique Lorray 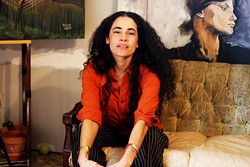 When many people think about art, the first things that probably come to mind are pictures of real and tangible things — bowls of fruit, sunsets, animals ... stuff like that. But the work of Charlotte-based artist Martique Lorray is, it seems, more about invisible, intangible and/or unreal things.

Some of her older pieces, for example, depict images of quasi-mythological hybrid creatures (each complete with an elaborate backstory) that were all born in Lorray's fertile mind.

And in her newest collection of paintings — The Weight Lifters, which will be on display starting Feb. 2 at Lark & Key Gallery Southend — balloons (according to her) represent people or things that "can't be seen" but "relieve some of the burden ... when life gets hard."

So what's the deal with these flights of fancy?

On her website, Lorray writes that she was "... born of Jamaican immigrants in the cultural soup of Miami" and "... grew up surrounded by language made up of metaphor and story." In conversation, however, she expands on her artistic origins, explaining that her imagineering is more commonplace than most folks think.

"The concepts all come from that shared old-world knowledge that I believe all humans share, which is a definition of 'archetype,'" says Lorray. "It's those symbols that we understand in our gut. Like a butterfly meaning 'freedom.' We understand that without saying it."

When it comes to The Weight Lifters, balloons take on a stress-easing meaning for more than just the obvious gravity-defying reasons.

"Balloons have an innocence to them. There's no fear in a balloon. There's a silence to balloons — yet, they lift us," she says. "So they seemed like the perfect symbol of a secret helper. And the red color representing that 'passion' color, that life force."

Lorray's own passion — for visual arts and culture, among other things — took root during her childhood. She attended an arts magnet school in Florida; outside of class, she was surrounded by friends and neighbors who eagerly delved into dance, theater and other creative endeavors. When it came time for college, she was offered a full scholarship to attend the University of Florida, but left school after a brief stint to join a rock band. Playing bass guitar in the all-female band — which was aptly named Warriors of Make Believe — took her to Arizona, where she explored a wide-range of artistic mediums. Six years later, Lorray left the band and set up shop in Oregon. After five or so years in the Northwest, she finally made her way to the Queen City (partly to reconnect with family). Throughout all of her travels, she honed her talents and her visual philosophy. These days, her vision — although it sometimes lives on the fringes of reality — is clear and her work represents that clarity.

"I think great art demands your attention. You can't help but to look at it. And it's gonna make your wheels start turning inside of you," she says. "And some people they don't like that."