Kidman And Cruise... Again | Features | Creative Loafing Charlotte
Switch to the mobile version of this page. 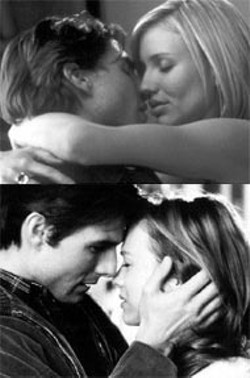 Alejandro Amenabar may not exactly be a household name, but this Chilean filmmaker had his hand in two of last year's best films, both now available on video and DVD.

It had been a long time since the film world produced a first-rate haunted house chiller that begged comparison to such long-established classics as The Innocents, The Uninvited and the original version of The Haunting, but The Others (***1/2 out of four) instantly vaulted toward the top of the standings. Set on an island off the British coast right at the close of World War II, this critical and commercial sleeper stars Nicole Kidman as a young woman living in a large estate with her two children (Alakina Mann and James Bentley), both of whom suffer from a peculiar (and potentially lethal) allergy that makes them incapable of withstanding bright light. The three spend every moment confined within the mansion walls, an undesirable situation once evidence mounts that the house may be haunted. Written and directed by Amenabar, this is the sort of muted terror tale that rarely gets made anymore: Creepy rather than scary, it builds upon an overriding sense of hopelessness and dread that's made tangible through Javier Aguirresarobe's shadowy cinematography, a wonderful music score (by Amenabar himself), and a superb performance by Kidman (whose Oscar nomination should have been for this, not Moulin Rouge). It's puzzling that this was packaged as a two-disc DVD, since there aren't that many extra features included in the set. Among the add-ons are a behind-the-scenes documentary, a feature on the special effects, and, most interesting, "Xeroderma Pigmentosum," a short piece on the real-life disease that afflicts the kids in the movie.

Certainly one of 2001's most misunderstood movies, Vanilla Sky (***1/2), Cameron Crowe's follow-up film after Almost Famous, had its genesis in Open Your Eyes, a 1997 Spanish thriller by The Others' Amenabar. An intriguing drama about a self-centered hunk who suffers from strange visions after getting disfigured in a car accident, Eyes was unpredictable in a manner that begged comparison with something as unique as Being John Malkovich: Thinking far outside the box, Amenabar provided a whiplash viewing experience akin to sitting down to watch The Big Chill and then having the film switched to Saving Private Ryan halfway through. Vanilla Sky is Crowe's risky remake, and what's most shocking about this controversial conversation starter is how faithful it remains to the original. Tom Cruise, a narcissist who nevertheless won't back away from perilous parts, shrewdly mixes both facets of his career as the pretty boy whose perfect life turns into a living hell after his face gets mangled, while Cameron Diaz, as his fatal attraction, slinks through the proceedings like a feral feline (Penelope Cruz, also in the original, reprises her role as the protagonist's dream girl, but she's mediocre at best). DVD features include audio commentary by Crowe, a feature on the film's international publicity tour, and an interview with Paul McCartney (who composed the Oscar-nominated title song).

Harry Potter and the Sorcerer's Stone (***) hardly needs any introduction -- it was last year's top moneymaker, with a domestic haul of $317 million (barely beating out The Fellowship of the Ring's $310 million) -- and it's not surprising that Warner went all-out in producing a deluxe two-disc DVD. A lavish adaptation of the J.K. Rowling bestseller, this magical mystery tour admirably works on both levels: as a stand-alone motion picture and as a worthy adaptation of a novel that, while hardly a literary landmark, is nevertheless funny, inventive and full of spirit and spunk. Director Chris Columbus has a deserved reputation for making cloying films (Home Alone, Bicentennial Man), but here he has deftly allowed the movie to walk the precipitous line between being too syrupy for adults and too grave for children -- and in the process found the perfect kids (Daniel Radcliffe, Rupert Grint and Emma Watson) to bring Harry Potter and his classmates to life. Among the countless DVD extras are seven deleted scenes, interactive games involving wand selection, playing Quidditch and more, theatrical trailers, and an eventually tiresome tour through Hogwarts.

Ocean's Eleven (**) earned largely favorable reviews and a whopping box office gross of $183 million, meaning I'm in the minority in labeling this 2001's biggest disappointment. Certainly, the film had potential: After all, the dirty secret surrounding the 1960 Rat Pack original is that it's a remarkably mediocre caper yarn that served mainly as an opportunity for Frank and friends to party at Warner Bros.'s expense. The Rat Pack members were cast as former WWII paratroopers plotting to knock off five Las Vegas casinos, but except for a clever twist ending, there's absolutely nothing memorable in what has long been regarded as one of the most expensive "home movies" ever made. So the good news is that Steven Soderbergh's remake is indeed better than the original; the bad news is that it achieves its superiority by just the thinnest of margins. Despite scripter Ted Griffin's complete overhaul of the '60 model, this remains a shambles, with more characters than it can sustain as well as the sort of obvious double-dealings that failed to fool us when we saw them earlier last year in The Score and Heist. As team leader Danny Ocean, George Clooney is simply dull, while Julia Roberts is saddled with the film's most ill-conceived role. Coming out on top is Brad Pitt: His part doesn't look like much on paper, but through sheer personality, as well as the sound application of some offbeat character tics, he's the one who constantly commands our attention. DVD extras include audio commentary by Soderbergh, Griffin, Pitt, Matt Damon and Andy Garcia, two behind-the-scenes documentaries, and theatrical trailers.