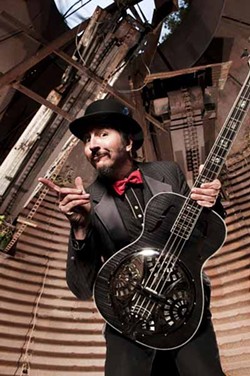 Since the mid-1990s, while the trio known as Primus went in and out of states of hiatus, bassist Les Claypool has ventured down the solo path under a variety of monickers — Les Claypool and the Holy Mackerel, Colonel Les Claypool's Fearless Flying Frog Brigade and Colonel Claypool's Bucket of Bernie Brains among them.

These days, since the 2006 release of Of Whales and Woe, he has simply been touring under the name Les Claypool. Fans have given his more recent bandmates the names Fancy Band, Fancy Trio and the Oddity Band.

"It's been Les Claypool as a solo artist for a while now," Claypool says by phone from his California home, better known as Rancho Relaxo. "A lot of that came from my old agent who just got tired of me having all these projects and decided he would just book me as Les Claypool and I could show up with whoever I wanted. For a while, the different monickers were the different band members. This way I don't get shit if a member of the Frog Brigade can't make it.

"Now, it's just Les Claypool. Maybe then it will be Claypool ... then it will just be Les. Then it'll be L.C.," he adds with a laugh. "To me, I've always thought of all these bands as solo. I played most of the instruments on the Holy Mackerel record and the Purple Onion record. It's taken me a while to just call it 'Les Claypool.'"

The current musician's conglomerate that's on the road with him consists of "Mike Dillon on vibraphone, marimba and various junkyard percussion, Paulo Baldi on a mutated drum kit and Sam Bass on cello."

Claypool is currently touring in support of his latest album, Of Fungi and Foe, which was released on March 17, 2009.

"This is just going to be a good old traveling-around-in-a-shiny-box-with-a-bunch-of-sweaty-men tour," Claypool says. "This is my favorite band. It has a combination of the primal element that I really like rhythmically and there's an eclectic, abstract element. It's a little darker than the stuff I've done since Primus. I'm digging it. It still has the warped circus vibe, but I'm enjoying the instrumentation."

Claypool says the new album, a collection of songs he wrote while working on the Pig Hunt movie soundtrack and Mushroom Men video game, is a large reflection of himself. It also includes a song featuring Eugene Hütz of Gogol Bordello. The song came out of jam sessions the two had before the 2008 Superjam which featured Claypool, Hütz and Kirk Hammett of Metallica.

"It was a normal writing flow (for the album) -- the inspiration in the beginning was based on what I was seeing on the screen or the story line or artwork, so the jump-off point was different than usual," Claypool says. "I knew that as I was writing the material, I would use it for something else down the road. They wanted 30 seconds here and 10 seconds there, but I gave them five minutes here and five minutes there. Once I get started, I want it to resolve, I don't want to just write a little blip."

While Claypool's solo set focuses on any of his non-Primus and non-Oysterhead material, he hasn't written off either of those bands for future projects. Primus most recently reunited for 2006's Beat A Dead Horse Tour. As for the status of Oysterhead, his band with Police drummer Stewart Copeland and Phish guitarist Trey Anastasio, he said, "There's always talk -- we were talking about doing O2, Oysterhead 2, in '04 and we didn't do it." The band released one album in 2001 and reunited for a set at Bonnaroo in 2006. When asked if he would go out and "beat another dead horse" with Primus, Claypool said, "There's also been talk of doing more Primus stuff, but it just hasn't come together." He's also discussed doing more recording with Hütz -- "He's about to have a new record drop, but I think it would be an interesting thing. It would definitely be a party."

Regardless of which band or name Claypool is playing under, one thing stands out -- his prowess on the bass. Whether it's a fretless six-string or a stand-up, Claypool's signature is unique and one that has him at the top of countless "best bass player" lists.

So, how does he rank himself in the pantheon of four-string pluckers? "I think I'm up there," he says. "There's no such thing as the best. It's all so subjective. There's so many things that so many people can do way beyond what I can do. You carve a trail through the forest, but that's where people pick up and take it beyond. There are some youngsters out there that will make me look like I'm standing still. I appreciate bass players, but I don't study bass players -- I haven't for 20 years or maybe longer.

"For me, my bass just happens to be the crayon that I picked out of the box. It's just the crayon that's the easiest for me to draw with. I played a six-string when I needed a challenge earlier in life. The four-string -- it's sitting here next to me -- is comfortable, it's easy and I can get what's in my head out.

Les Claypool will perform at Neighborhood Theatre on May 26 with O'Death. The show starts at 8 p.m. Tickets are $25 in advance, $30 on the day of show and $40 for VIP.