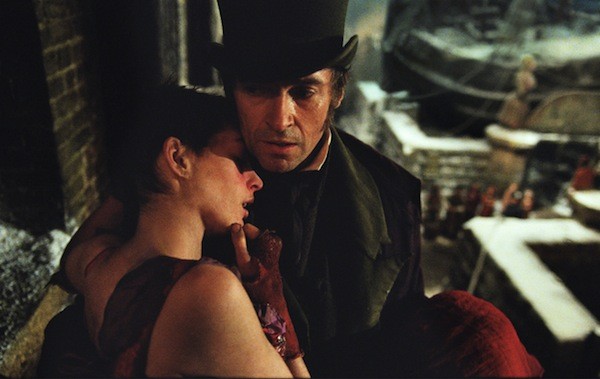 Now available for purchase is the CD Les Miserables: Highlights from the Motion Picture Soundtrack, and it's too bad there's not a way to provide moviegoers with the option of seeing either the full-length Les Miserables or, like the CD, a similarly edited cut called Les Miserables: Highlights of the Motion Picture. Eagerly anticipated in some circles while dreaded in others, this long-gestating adaptation of the musical stage smash (itself based on the Victor Hugo novel) contains some powerhouse sequences and a couple of standout performances but also suffers from a bloated second half and at least one casting decision that's impossible to defend.

Oscar-winning director Tom Hooper, better at handling the small-scale challenges of The King's Speech than the massive spectacle of this project, employs obvious CGI theatrics for the opener, wherein 19th-century French convict Jean Valjean (Hugh Jackman) is seen toiling on a ship under the watchful eye of the merciless lawman Javert (Russell Crowe). Circumstances that occur after his release allow Valjean to reinvent himself as a wealthy and compassionate man, although the gig is up once Javert comes back into his life. Regardless of his own increasingly cumbersome troubles, Valjean will not break the vow he made to the tragic Fantine (Anne Hathaway) to protect and care for her daughter Cosette at all costs. This becomes harder once Cosette comes of age (played by Amanda Seyfried) and falls for a headstrong revolutionary (Eddie Redmayne).

As Javert, Crowe is an unmitigated disaster, and his strained voice, pinched expressions and physical immobility suggest that someone off-camera was forcing him to participate by pointing a gun at his head. As the comic-relief characters of the crooked Thenardiers, a little of Sweeney Todd co-stars Sacha Baron Cohen and Helena Bonham Carter goes a long way, while Seyfried and Redmayne make no impression whatsoever as the young lovers. Fortunately, Jackman is potent in the leading role, and it's nice to see Hollywood taking advantage of his versatility. Yet the showstopper is Hathaway, who's tremendous in the disappointingly small part of Fantine. She breaks your heart with her emotionally exposed turn, and between this and The Dark Knight Rises, she proves herself to be the performer from 2012 who most deserves to collect whatever awards the critics and the industry care to throw her way.

Les Miserables is not showing in any theaters in the area.