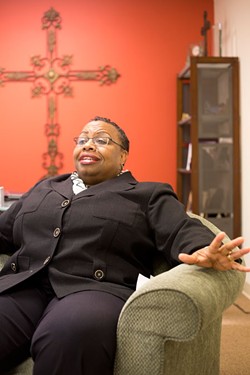 When Tonyia Rawls came to Charlotte 14 years ago, she looked out upon the city's faith community and saw closed doors, closed hearts and closed minds.

"Nobody was willing to say 'God,' 'gay' and 'good' together. It was like, 'We are not having this conversation with you.'"

Rawls, who identifies as lesbian, had moved from Washington, D.C., to set up the Unity Fellowship Church Movement's first flock in the Queen City. The denomination, founded in 1982, was born from a need to minister primarily to LGBT blacks during the height of the AIDS crisis.

"Our clergy were among the few who would actually support LGBT people," Rawls says.

The denomination's presence in the South grew, from her lone Bible Belt church to several others. In 2008, she was elected a bishop, eventually overseeing her church in Charlotte in addition to churches in Atlanta, Charleston and D.C. The LGBT-specific ministry grew, providing a safe space for those who needed affirmation.

People still need that safety and assurance, but, these days, Rawls and many of her congregants feel a new call. That's why they've founded a new body, Sacred Souls Community Church. Though Unity Fellowship Church Charlotte will continue — now meeting weekly at the LGBT Community Center of Charlotte — Sacred Souls will focus on a new, more open ministry to reach the entire city.

"Every soul is sacred, and we are called by God to really serve at that place," Rawls says. "When you look at a soul as sacred, every other defining measure goes away. I no longer see race. I don't see a man or a woman standing in front of me. I see just a soul — this wonderful thing God has created."

Frankie Pickens is a Sacred Souls member. She was with Rawls at the birth of Unity Fellowship Charlotte and helped develop some of the first services. Like her bishop, Pickens sees a need to expand.

"The call she has been given is one that aligns with my own spiritual vision," Pickens says, "that we would be a ministry that would speak to whosoever, for real."

As Rawls and her congregants embark on this new spiritual journey, they'll take "whosoever" — gay or straight — while preaching a radically inclusive message they hope will change culture and create community.

Sacred Souls' location on Eastway Drive, in east Charlotte, will aid them in that mission, says Rawls, who describes the area as "complicated."

"28205 has the oldest country club in Charlotte and some of the highest poverty rates," Rawls says. "The complication is that we are so incredibly diverse and probably one of the most diverse areas of Charlotte — from the immigrant community, the racial diversity, socioeconomic status and the LGBT community."

Sacred Souls will seek to bring each of those communities together as they outreach to thousands of their close-by neighbors in apartment complexes scattered along Eastway and in adjoining neighborhoods. Several bilingual members of the congregation are interested in connecting with the Latino community. New and expanded ministries will provide free counseling and health and well-being programs, such as "Emotions Anonymous" and "Overeaters Anonymous." The church is brainstorming a summer neighborhood theater arts program for children.

"We see new ways of being able to support not only our congregation, but also the needs in the larger community," Rawls says.

She admits her more open and broadened ministry is somewhat ironic. She began her ministry reaching those excluded by others. Now she's also trying to reach the others.

"We are being challenged by God to say, 'How are you leaving out others of my children?'"

Worshiper Angela Thompson says the new focus on greater inclusion means new opportunities for fellowship. At a recent church service, Sacred Souls and another local congregation, a predominately heterosexual one, worshiped together — an experience that may not have usually happened at Unity Fellowship.

"That's one thing I missed when we were Unity — the fellowshiping with another church and meeting other people," Thompson says. "It doesn't matter who you are, who you love, what color you are, we are all God's children."

Rawls says she'll continue the same social justice-oriented leadership she's known for. She'll continue to speak at statewide social-justice events, as she did recently at the NAACP's Historic Thousands on Jones Street march earlier this year, in Raleigh. She'll continue to encourage people to be civically engaged. She'll continue to work with other pastors whom she's seen grow in their inclusion of LGBT people and other diverse communities.

"There is a common human sense of rightness and there are also responsibilities and protections that come with citizenship," she says, pointing to an obligation all people, including clergy and people of faith, have to be aware of the issues facing their neighbors. "When thinking about affordable housing or a quality education for all, those are things that in my mind should be the concern of people of faith."

But Rawls says people of faith never have the right to impose their beliefs on others. "The religious right says, 'The way we think is the way the whole community should be governed.'"

Instead, people of faith should seek to embrace their unique role in building and facilitating conversation and dialogue across lines of difference, while upholding every person's dignity.

"The beauty of the world is what happens at those points of intersection," Rawls says. "As a person of faith, it's where I believe my faith is worked out."

Rawls says Sacred Souls Community Church's mission will be to encourage all people to live uniquely and bravely in Christ.

"You have to walk your own authentic path. If we all purpose to do that and not be so ready to judge others when they do that, we're going to have some incredible times."