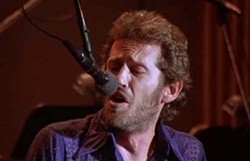 A friend of Levon Helm's gave me fair warning: "Don't mention Robbie Robertson early in your discussion with him. You won't be able to get him to talk about anything else. He'll just go off!"

Helm, of course, is the soulful, Arkansas-born singer and drummer who died Thursday at 71 after a 15-year, on-and-off battle with throat cancer. Robertson was Helm's fellow musician in a storied Canadian band that called itself simply, The Band. The five-piece combo gained fame when it backed Bob Dylan during his mid-'60s peak in popularity – around the time Dylan went from acoustic folksinger to electric rock poet. After The Band's brief time backing Dylan, the group went on to record some of the most literate and soulful, semi-narrative albums in rock history. It's somewhat ironic - and certainly circuitous - that it took a Southern transplant in Canada playing with a group of young musicians who didn't grow up in the United States, much less the South, to define the parameters of what today is known as Americana music.

But back to Helm and Robertson. They had a difficult relationship, to say the least. If Robertson was The Band's poet and storyteller, Levon Helm was its soul and its muse. Robertson wrote songs that were epic short stories or vignettes centered on American life, but what he knew best of American life was what he heard from Levon Helm and the band's earlier leader, Helm's old buddy Ronnie Hawkins, another Arkansas transplant living in Canada. When the group left Hawkins to tour with Dylan, Robertson became default leader, even though Helm was the eldest member and the original band had been called Levon and the Hawks. But Robertson was a charismatic character and prolific writer, most famously penning "The Night They Drove Old Dixie Down," which tells the simple but profound tale of a young Civil War soldier from the South - in the soldier's own voice. Packed with vivid detail, imagery, metaphor and tension rarely heard in rock lyrics, Robertson's songs came to life through the voices of The Band's other members, including Helm, who in "Dixie" positively transformed himself into that scared young Civil War soldier, spitting out the opening lines in his gravelly Arkansas drawl: "Virgil Cain is my name and I served on the Danville train / 'Til Stoneman's cavalry came and tore up the tracks again."

In another of Robertson's early songs, "King Harvest (Has Surely Come)," a farmer who winds up destitute tells of joining a labor union. Helm doesn't sing "King Harvest" – another member of The Band takes vocals on that one – but the way he pounds his drums along with Robertson's stinging guitar drives home the desperation in the song's second verse, as the farmer pleads: "Hey, rainmaker, can you hear the call? / Please let these crops grow tall. / Long enough I've been up on Skid Row /And it's plain to see, I've nothing to show." Helm knew about that kind of desperation; he was raised in the Arkansas farm community of Turkey Scratch in the Mississippi Delta.

That's why it is often repeated (and I'll repeat it yet again): Robertson was The Band's poet and storyteller, Helm was its soul and muse.

Together with the other members of The Band – all passionate, heartfelt and talented young Canadian musicians – this combination was magical, and it produced at least two of the greatest albums in the folk-rock canon: 1968's Music from Big Pink (which The Band composed together in a big pink house in mountainous Woodstock, New York) and 1969's The Band. The combination also proved to be explosive. By the end of The Band's run in the mid-'70s, Helm hated Robertson, whose ego had become out of control. After director Martin Scorsese centered one of the greatest rock films ever on The Band's final concert (The Last Waltz), Helm and the other members never again played with Robertson. It was a feud that lasted until Helm's death on Thursday.

But that's all irrelevant now. In reality, I suspect they all loved each other very much until the very end – the same way any dysfunctional family members who hate each other love each other. You can't create and perform music like The Band did together and not have some kind of loving bond that transcends the bitterness of ego. I interviewed The Band, minus Robertson, in the early '80s, just after the suicide of its keyboard player Richard Manuel, and each member asked me to be gentle with the group's other keyboard player, Garth Hudson, as he was having a particularly hard time dealing with Manuel's death. They treated each other like family – like real family.

After the Robertson era of The Band called it quits following The Last Waltz, Helm recorded some solo albums and landed a role playing actress Sissy Spacek's father in the Loretta Lynn biopic Coal Miner's Daughter. He and Spacek performed an amazing concert shortly thereafter on the pre-MTV music television show The Midnight Special. Helm and the other Band members reunited in various configurations after that for several tours and albums. The highlights of those performances often were Helm's signature drumming and gritty vocals – filled with passion and soul, sung as though he were desperately trying to communicate some larger truth. But he never cracked the truth of that feud with Robertson. When I sought an interview with Helm in 2002 for my book, Dixie Lullaby: A Story of Music, Race and New Beginnings in a New South, I got the warning from Helm's buddy: "Don't mention Robbie Robertson .... He'll just go off!"

On Wednesday, Robertson visited his old band mate in the New York hospital where Helm lay dying. "I sat with Levon for a good while, and thought of the incredible and beautiful times we had together," Robertson wrote on his Facebook wall. Perhaps the truth of that feud was cracked the day before Helm died. "Levon is one of the most extraordinary talented people I've ever known and very much like an older brother to me," Robertson went on. "I am so grateful I got to see him one last time and will miss him and love him forever."

So will those of us who were transformed by the music and stories of not just Levon Helm, but of Levon Helm, Robbie Robertson, Rick Danko, Richard Manuel and Garth Hudson. The Band.