The revolution will be screen printed

When local screen print artist Evan Plante hosted a show called "Reclaimed" at Twenty-Two art gallery in Plaza Midwood two years ago, his goal was to show the city a culture he felt it was lacking.

Plante brought in screen print artists from around the country to showcase the possibilities of the art. Now, he and his wife Susan Plante will host Print|Organize|Protest: Charlotte on March 5 in hopes of instructing and inspiring local folks to get involved in screen printing themselves by printing t-shirts and posters based on resistance. The event is part of a nationwide campaign and will be held in conjunction with similar pop-ups in cities ranging from Chicago and New York to Austin, Texas, and Berkeley, California in the lead-up to International Women's Day on March 8.

Creative Loafing sat down with the Plantes at The Company Store in NoDa, where the event will take place, to talk about the role of screen printing in activism and why it's needed now more than ever. 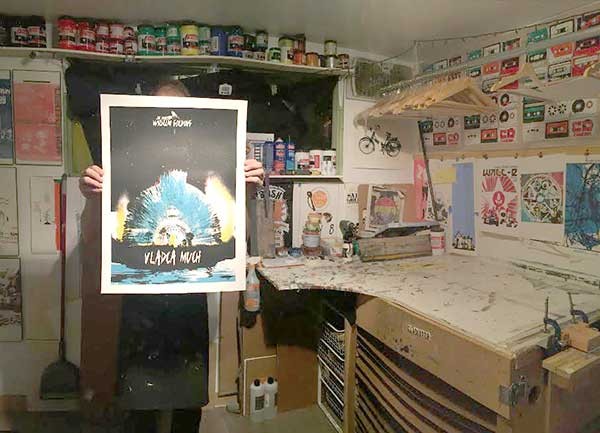 Creative Loafing: How did you get into screen printing in the first place?

Evan Plante: When I lived in Richmond, Virginia, I was in a lot of political punk bands and stuff like that, and screen printing was just something that all the bands did. All the bands made their own t-shirts and made their own posters — resistance art and stuff like that. It was just part of the scene. I said to my friend Braden, "I'll trade you whatever if you'll show me how to screen print."

He said, "You don't have to trade me anything, I'll show you how to screen print just because you should know how to screen print." When he taught me how to do it, it was definitely on a DIY level for punk kids that didn't have any money to go and buy real equipment basically. I held on to that because I've never learned how to do this the right way. I've been doing it off and on for 16 years. I've never taken a course and have never owned real equipment until very recently.

Braden showed me how to do it because he wanted to push that information around. He just wanted to be helpful and I wanted to learn. For 15 years I've had this thing in my brain, like, I really want to pay that forward, I want to show people.

At some point you founded Docklands. What made you go official?

Evan: I couldn't find the culture; this culture that revolves around activism and DIY and music and how all those things coalesce together. I just felt like, where is that? Maybe it's around but I couldn't find it. And so I was like, "Well, I'm going to start doing this because I need to express myself but also because I want this culture to exist in Charlotte. It makes people think, "Oh, why don't we have that? Why are we such a glossy city, such a plastic city? How come there isn't this kind of grassroots, fly-by-the-seat-of-your-pants, make-it-happen kind of atmosphere?" I think it's growing now. 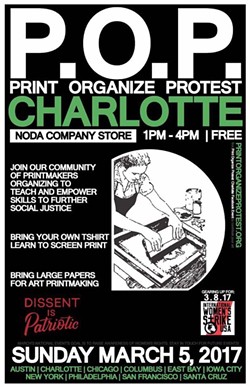 How did you two get involved in hosting the local Print|Organize|Protest?

Susan Plante: When he was asked to do it, he started waffling a little bit afterwards because he felt like, "I don't know if anybody's going to come to this if I set up an event. Is it worth it?" It's cool because I feel like a lot of the other cities involved are considered much bigger, well-known cities. It's nice to get Charlotte on that kind of map.

When I saw the other cities involved I got really excited. He wasn't sure if anybody was going to show up and we were talking about this and I was just like, "Let me take the lead and organize it because I know a good group of women that are already active in the community — in the activism that has come up."

How important is that activism aspect of screen printing in light of the recent election?

Susan: All of the recent marches, not just the Women's March but the Day Without Immigrants march — all of them — I think it's really important for people to know that there's still a wide-reaching community that disagrees with some of the ideas that this administration has.

Evan: I think the idea that enough people voted for [Donald Trump] to win is just a really bad sign. All I want to be doing is, I don't want to burn down the state, I want to help the state, I want to help the community come together. I feel like I'm just floating out in space right now; like I don't have my people and I don't have a country anymore and I feel like I'm not a part of anything, and that's scary. I want to bring people together so that if everybody feels as lonely and as scared and as freaked out as I do, then at least we're lonely and scared and freaked out together.

How will Sunday's event build on that idea?

Susan: The interactive nature of what's going to happen at P.O.P. is going to be empowering on its own, that people are going to be making their own t-shirts or posters or whatever it is, that to me is awesome. Not only am I going to have this t-shirt that supports my beliefs but I'm making it myself, and I think that's just empowerment in itself. It's a group creative project. It's not Docklands, it's not just us two, it's going to be a collective of whomever comes out, a collective group doing this creative process.

Evan: The Women's March was such a healing event for me because I felt so alone and then I found myself in a group of thousands and thousands of people, and for the first time I felt not alone. I want that to happen every weekend, but I realize that it can't happen every weekend. But if we can print a shirt that 1,000 people will wear and I'll see them on a street corner and realize that they're still there — we may not be walking around together in a giant group, but we are here — then that's how I'm helping. I'm not organizing a march but I'm helping knit together the fabric of the march when it's not together.