Brittani Burns watched in amazement as the young woman next to her at Central Coffee — after asking permission — pulled up Burns' website, typed something into the URL and was suddenly looking at the site's HTML coding.

Until that moment, Burns, a photographer by trade and relative newcomer to website development, had thought the coding she had worked on during all-nighters and caffeine-fueled days over the past year was for her eyes only, but she looked on with a gasp then a smile as her neighbor scanned all Burns' hard work, looking for ways to help her in the design.

"I didn't even know this was possible," Burns said, her face reddening. "I thought only I could see my work. I feel so violated."

She was joking, of course, as this newfound knowledge was exactly the type of reason people attend Coffee & Code events, a meet-ups by the local women-in-tech group Girl Develop It. The group also holds "Babes & Brews" events for the craft beer crowd.

Across the room, GDI Charlotte Chapter Leader Cristina Veale chatted with another group of women, some of whom were attending the event in South End to find help transitioning to a tech career, while another admitted she came because she doesn't get out much but loves coding. 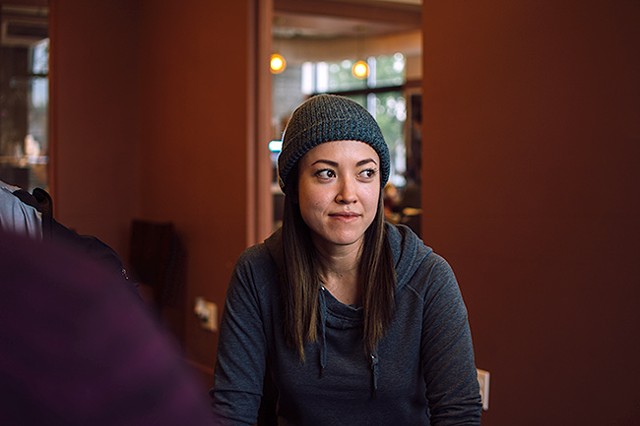 This is kind of group Veale hopes to see at the events. Since taking over the GDI Charlotte chapter in 2015, she has helped grow the MeetUp.com group to nearly 1,300 members. She and fellow organizers host meet-ups, workshops and boot camps, all aimed at helping women feel more comfortable in the tech world.

"In Charlotte, the tech community is pretty small," Veale said. "I think for women, specifically, they do need some outlet in terms of getting into tech because it is a male-dominated field. So that's mainly our mission — to have a safe learning space for women who don't feel intimidated to learn about technology."

Five years ago, Veale was working as an IT recruiter. Finding folks tech jobs was her only involvement in the field, until she realized that with demand for web developers skyrocketing, she was seeing hardly any women stepping up to fill the roles.

"[Female developers] were like the Golden Egg. You couldn't find these people," Veale said. "I noticed you don't need a college degree related to computer science. You don't even need a college degree, you really just need relevant experience," she said. "So I started looking around and seeing if that was something that I wanted to do."

Instead of spending her time searching for the Golden Egg, Veale decided to become one. She studied web development for about half a year on her own before joining GDI and attending a few workshops. She was eventually asked to run the chapter when the old lead organizer moved to California.

"I feel like I went full circle," Veale said. "That's what got me started and I wanted to do the same thing for others."

Now, Veale hopes to join forces with other women-in-tech organizations around the city to help cultivate the growing number of women interested in joining the tech field. A new movement called #TechYourSeat aims to connect these Charlotte organizations, beginning with a convention that Veale hopes to organize by June. Representatives of each organization will attend the convention and set up booths to help women network and find jobs.

"We want to try to start this women's movement in Charlotte that is focused on women in technology to essentially take their seat at the table," Veale said. "The way that we're doing that is we're meeting together monthly to try to get together around one big central point: this event in June. We want to have all the women-in-tech groups come together in a centralized location, talk about who we are, how you can get in touch with us and also just to network."

One attendee at the Saturday Coffee & Code event, Megan Feichtel, said she was attending her first GDI meet-up to help her get ideas for the newer local group she's involved with, Women Rising. 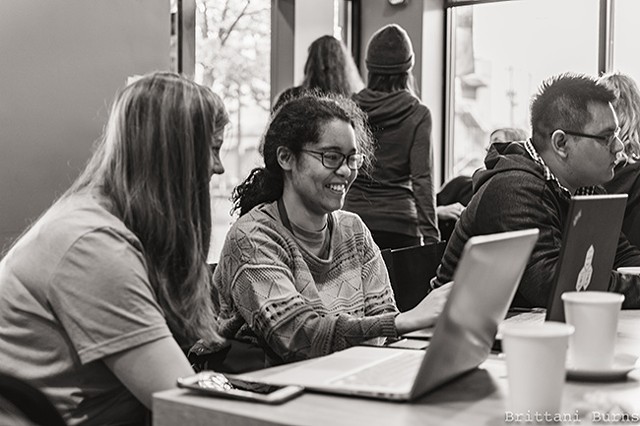 "People might think that they're very separate groups, but at the end of the day we're all working on the same mission," Feichtel said. "What I've noticed most about groups like this is that people are really trying to support each other, whether that be men or other allies that come, we're all trying to be supportive of each other."

Feichtel has found no shortage of women looking for a place to discuss the technology field without judgment.

"Women love being able to have a space that they feel safe to come to and talk about the issues that they've come across, whether that be technical or environmental," Feichtel said. "They are looking for a group where they don't feel like just part of a boys' club, to actually have meaningful conversations about technology."

GDI events are also about gaining skills, and that will be the goal of the upcoming Web Accessibility 101 Boot Camp, to be held at Cardinal Solutions in Uptown Charlotte on Saturday, April 14.

Louise Clark, co-organizer with GDI, recently attended CSUN, an annual assistive technology conference held in San Diego. She came back with a wealth of knowledge on web accessibility, and hopes to share that on Saturday with the help of one of the country's leading figures in the field.

Preety Kumar, founder and CEO of Deque Systems, has been working to improve web accessibility since 1999. Clark said her "jaw just dropped" when Kumar not only offered Deque's help, but insisted on traveling from her home in Chicago to Charlotte to assist in leading the boot camp.

"It's so important for women to mentor other women in the tech industry and to really reach out, I benefitted from that myself," Clark said. "That is invaluable in this field because this field moves so fast, and just because you've got your foot in the door doesn't mean that it stays open.

"Of course, it doesn't have to always be women mentoring other women," Clark added. "But people like Preety, who have been in the world of tech for a while, they have a unique perspective that they want to share with us about how to navigate the field of tech."

While most people think of income inequality when they consider web accessibility, Saturday's event will focus on those who can't access websites due to physical or cognitive disabilities.

And with everything on the internet, there's no shortage of employers looking for people to develop it — and they increasingly need folks who can code it in an accessible manner.

In Charlotte, people like Veale and Clark are ready to help provide women to fill those roles. And they're not waiting for permission to take their seats at the table.