The big bail out

For countless black mothers in Mecklenburg County, Mother's Day will be spent away from their families. These mothers are locked up for crimes they may or may not have committed, unable to buy their freedom, stuck until their court date arrives.

What these women don't know is that activists they've never met are working from the outside to free as many of them as possible and reunite them with their families by Mother's Day. It's an effort that organizers hope will be the beginning of a long-running, self-sustaining project in Charlotte to help fight back against the prison industrial complex and stop the economic drain the justice system puts on black communities.

The project is Black Mamas Bail Out, and it is part of a larger effort by Southerners on New Ground (SONG), a regional queer liberation organization, that has spurred a countrywide movement involving different organizations from New York City to Texas.

Local organizers say they decided to bring the project to Charlotte following a SONG conference in Highlands, N.C., in early March. Joie Shakur, a local organizer with SONG, said the group was immediately attracted to the idea when they learned about it at the conference.

"One of the members from Atlanta had this vision to see black mothers be free and be able to spend Mother's Day with their families," Shakur recalled. "From there, folks just started researching in different areas, to see what they could do. We started digging through it and decided we were going to do it." 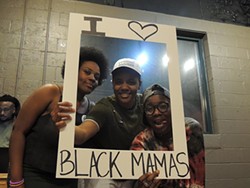 Local efforts kicked off with a party at the Creative Arts Studios in NoDa on Friday, April 28. Organizers brought clothes to sell while music played and in a corner, brewers with Black Star Line Brewing Co., an all-black, queer-owned brewing company from Hendersonville, N.C., poured free drinks for attendees. With only about 20 people, if that, attending the party, organizers were able to raise $500 in just a couple of hours.

Speaking at the party, Shakur explained how exciting it was to see the work the group had put in over the last two months finally turned into action.

"It's a really awesome feeling just to see it materialize, and to know that these are actual moments that will be given back to folks on the 10th, 11th and 12th [of May] when we start to bail folks out," Shakur said. "They hold people for a very long time, while trial dates just keep getting pushed back, but to know that you can allow someone the opportunity to be with their children for Mother's Day, to be able to celebrate with their loved ones, that's awesome."

For others in the Charlotte activist scene, the Black Mama Bail Out project is a way to act on things they have learned since last September, when charges filed in relation to the Charlotte Uprising found them working their way through the court system.

Gloria Merriweather is still facing charges ranging from felony inciting to riot and misdemeanor assault on a government official to misdemeanor noise violations stemming from the protests in September.

Merriweather said they and other Charlotte Uprising members have sat through their own court dates and watched as other community members left court dejected at not being able to post bail for their loved ones.

"What we were really able to see was that, when we go to court, the families that stand up and say, 'I'm here for this person,' they're the ones who get told how much the bail is, and they're the ones who turn away, faces fallen, because they know they don't have $1,000 in that moment," Merriweather said. "They know they don't have the means to get their people out."

Merriweather said that when people in the courtroom became aware that they were with Charlotte Uprising, those people often asked for help.

"You have to remember, Charlotte Uprising was mainly comprised of people under 25 years old," Merriweather said. "We gained a knowledge of the courts that we were then able to share with other community members who came into the courts and didn't have that liaison. So when we realized that we could be that, we found an interest in getting people out of jail."

For Ashley Williams, another Charlotte Uprising leader who is now working on the Black Mama Bail Out with Sister Song, a reproductive justice organization they work with, the project is just a step toward their end goal of eventually abolishing the police state and prison system.

Williams and Sister Song NC will hold a teach-in on Saturday, May 6, to give people a clearer view of what they mean by abolition.

"'We keep us safe.' We've been saying that a lot over the last six months, but for this next event on May 6, I'm really excited to be able to talk about how these are the impacts of not having black femmes in their households and in their communities, and this is what abolition means," Williams said.

"When we talk about abolition, I think people definitely see it one way, or they can't see it at all, and so what I hope that we'll do is talk about what those alternatives look like. Like, here is what you do instead of calling the police in a domestic violence situation, or if a friend turns up a little bit."

In September, one of the most persistent demands from Charlotte Uprising as an organization was that the city defund — or at least decrease funding for — the Charlotte-Mecklenburg Police Department. That's not likely to happen, as a new city budget presented by city manager Marcus Jones on Monday, May 1, included $6.1 million to go toward hiring 61 more CMPD officers and 25 civilian position within the department.

While activists like Williams and Merriweather continue to work toward their vision of abolition, projects like the Black Mama Bail Out serve as a first step in fighting back against a justice system they see as the biggest threat to black communities. 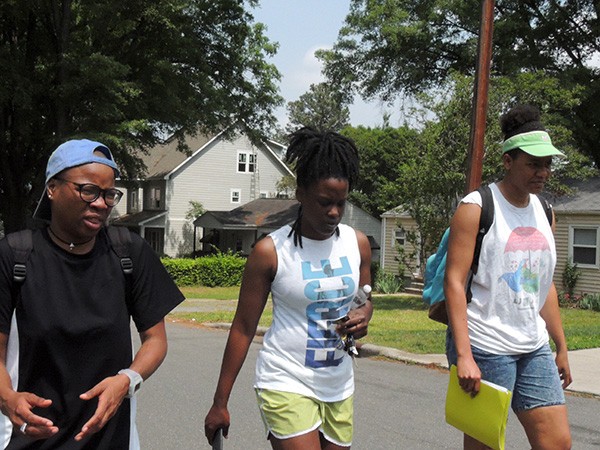 They hope to continue the project well past Mother's Day, recycling what money they do raise by giving those mothers they help the resources they need to keep their jobs and attend their court date, then getting that bail money back and putting it toward getting someone else out.

"A lot of abolition is about re-humanizing, rebuilding community and finding ways to engage in injustice that doesn't involve dehumanization and putting people in cages," Merriweather said. "So for me, this is perfect because the hope is that, through the bail out, when we bail out Mom and we as a community help her get back to court, we now have that money again and we can go get another person out. And perhaps we can get the person who we bailed out last time involved in the process next time, which builds community inherently. It builds trust, which is something that in marginalized communities is really hard to create tangibly."

Black Mamas Bail Out organizers will offer help connecting mothers with services they need outside of just getting to their court date. That means referring them to services to help with housing, jobs or even something as simple as clothing, if needed. They've been canvassing in Section 8 housing projects and other marginalized communities around Charlotte to ask residents about who is in need of help. They hope to connect to families of jailed women as opposed to choosing names from a list of those incarcerated in Mecklenburg County.

"I really like the idea of anonymously trying to find black moms who exist in this town, but I also like the personalization of it, knocking on folks' doors and being like, 'What's up? And can we help?'"

Organizers also hope the project can highlight the problems with the money bail system.

According to a Pretrial Justice Institute (PJI) report released in January, U.S. taxpayers spend about $140 billion a year — or $38 million a day — to hold the 450,000 people sitting in jails awaiting trial around the country on any given day, many of whom are low-level offenders who would pose little to no risk to the public, if only they could afford bail.

Shakur pointed out that, while taxpayers do hold a heavy burden that adds up, the families with loved ones in jail are the ones who pay the most immediate cost, a cost that could ruin them financially.

"The bail system in general is just one of the ways that our community gets depleted when it comes to finances and economic resources," Shakur said. "Especially folks who haven't been tried, and the only thing separating them from their families is not having that money. It's all based on economics, whether you can buy your freedom or not."

PJI recommended that court systems conduct formal risk assessments in order to release more defendants on their own recognizance, and found that implementing alternatives to pretrial incarceration — as some jurisdictions around the country have already done — could save taxpayers $78 billion annually.

For Charlotte organizers, however, it's more personal than that.

On the Saturday morning following the Black Mama Bail Out kickoff party, Jalisa Horne joined Merriweather and Shakur to canvass the Villa Heights and NoDa neighborhoods soliticiting support for the project. Horne was still learning about the details of the project, as they practiced their pitch to residents and business owners in the area. Horne said they volunteered to join the efforts after putting themself in the shoes of the mothers languishing in cells on a day meant to celebrate them.

"Just hearing that and knowing people who are stuck in jail because they can't pay for it, it just sounds really ridiculous," Horne said. "Just imagine if your mother was in jail and she couldn't afford her freedom. How would you feel? Especially on Mother's Day, how would you feel being in that situation?"

Merriweather, though not a mother, knows that situation all too well. That's why Merriweather was out on the streets Saturday morning, not protesting but asking for help, and will be on the streets until Mother's Day asking after those who need help.

"We're asking for minutes to be brought back into our community. If we talk about marginalized communities and the way that prisons literally take minutes and moments away from our households, by showing that we're able to do this, that's an empowerment and I think that's a lot of what's necessary for liberation and revolution," Merriweather said.

"Do you even feel that you can be free? Do you feel like this is possible for you? To give that to a person, it's just plain and in your face. You are literally sitting in your jail cell thinking you are going to spend your next few meals there, your next few times sitting on that metal toilet, and that lasts for months for many people. And now you're out because of random strangers in your community who give a crap about you. And now they want to host a dinner for you and your kids as well. That's dope."

To donate to the Black Mamas Bail Out, visit the donation site at the national SONG page, where you can also specify you want the money to go toward the efforts in Charlotte.