On a sunny but chilly October morning in 2016, Glo Merriweather stood on E. 4th Street in Uptown Charlotte wearing a black hoodie over a black shirt that read "Stop Killing Black People" and camouflage pants. Merriweather's militant attire and afroed hairstyle was reminiscent of the Black Panthers, but speaking to Creative Loafing in the moments before leading a procession, the activist showed a vulnerable side.

"I can't tell how hard it was over the weekend to prepare myself to go into what really for us is the lion's den," said Merriweather, who identifies as trans non-binary and uses they/them pronouns.

Merriweather was there to turn themself in on charges of inciting a riot and assaulting a police officer stemming from the Charlotte Uprising that had occurred just a month before.

"The police department doesn't protect our interests, it doesn't protect our people, so willingly choosing to walk into this space to get a process started that will free us, that was a really tough thing to come to terms with. I'm 24 years old. A lot of people think we're these seasoned veterans, but we're just people who imagine a world that's different than what we're living in."

Then, flanked by about 25 supporters holding signs, Merriweather strode confidently toward their jailers. The swagger returned, as the community organizer addressed the crowd loudly as they walked.

"I am walking in on my own," Merriweather exclaimed. "I am not going to have them dragging me anywhere. We control this. This is ours. This is where I'm coming to start a trial so that I can exonerate myself from these crazy charges that make no sense."

Now, one year later, Merriweather will finally have a chance to start that process, as their arraignment is scheduled for November 28. They appeared in court for an arraignment on Tuesday, October 24, but it was pushed back a month. Merriweather is one of a handful of protesters still facing serious charges stemming from the Charlotte Uprising, which include felony inciting a riot and misdemeanor assault on a government official.

Jamil Gill, aka King Millz, whose live-streams during the Uprising garnered thousands of views, also returns to court in November on charges of striking three police officers with his car on September 20, among other things. 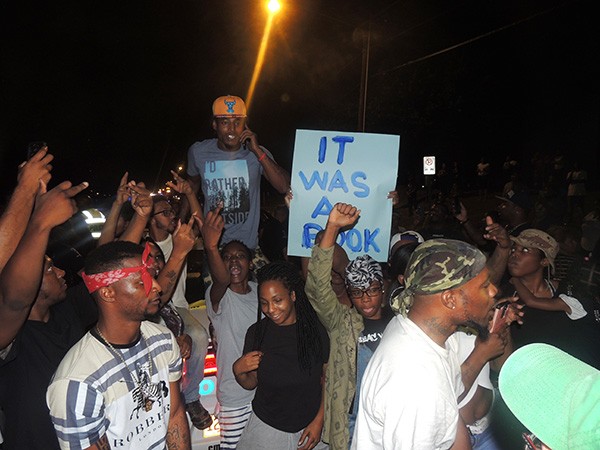 Fellow community organizers and supporters packed the courtroom on Tuesday to support Merriweather, who some say is serving as a scapegoat to answer for the community's response to the shooting death of Keith Lamont Scott last September.

"There are a couple people being penalized and charged with an entire uprising that covered a long amount of days, that a lot of different people were engaged in," said Ash Williams, a fellow Charlotte Uprising organizer. "What we're seeing now is these last few folks who the state is really trying to make an example out of, and we know for Glo that's because they are queer and black."

Merriweather believes police have targeted them for arrest multiple times since the Uprising, including during an action in protest of President Trump's Muslim Ban at Charlotte Douglas International Airport and a protest in solidarity with Standing Rock protesters, both in early 2017. In both of those cases, Merriweather's charges were dropped.

"I'm not accepting the plea," Merriweather said. "I should not only have my day in court but I should be able to say that my life deserves more consideration than from somebody sitting at a table [deciding on a punishment]. So I want to take this to trial."

Merriweather could be sentenced to between zero and 46 months in jail if convicted on the charges they currently face.

Over the past year, the district attorney's office has been quietly moving through cases of suspects charged with crimes during the Charlotte Uprising. Some who agreed to plead guilty have been given suspended sentences, ordered to pay restitution and complete probation rather than serve jail time. 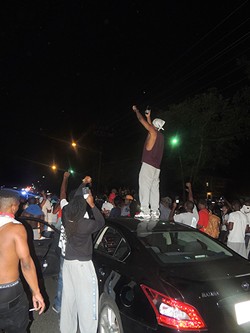 For example, Malik Alexander pled guilty to felony breaking or entering in August and was sentenced to five to 15 months in prison. That sentence was suspended pending his successful completion of 24 months of supervised probation.

Tyteries Dunbar pled guilty in July to two counts of felony breaking or entering and was sentenced to eight to 19 months in prison. He, too, was given a suspended sentence pending completion of 24 hours of supervised probation. Both Alexander and Dunbar were ordered to pay restitution for damages they caused.

The district attorney's office does not keep track of how many people have passed through the courts for charges stemming from September's unrest, or how many still have unresolved cases pending. The CMPD did not answer requests for final stats on how many people total were arrested in connection with the protests.

Williams said they hope their presence during upcoming court dates will not only be symbolic, but also help Merriweather in a concrete way, from how they are treated by officers of the court to how the judge resides over the trial.

"We know that having the community support in the court room has an impact on how the judge treats us in terms of reiterating the rules to the sheriffs — who can act extremely trans antagonistic."

At one point on Tuesday, a deputy informed the crowd that anyone who was not a defendant or lawyer would have to leave the courtroom, but after Merriweather's supporters objected, they were allowed to stay.

Williams said the support will continue through Merriweather's case, Gill's case and the trial of Rayquan Borum, who has been charged with the killing of fellow protester Justin Carr on September 21 during the Charlotte Uprising. Borum's court date was also rescheduled at the last minute on Tuesday.

Merriweather's trial comes at a time when many black community organizers are feeling the strain of living under the Trump administration, as the country has seen a rise in the popularity of white supremacist groups emboldened by a leader who is more concerned with so-called "Black Identity Extremists," as identified in a recent FBI report uncovered by journalists.

A statement from a press release announcing the upcoming court support efforts read, "The threat to lock Glo in a cage, particularly in a time when white nationalism is on the rise and the FBI is stepping up their efforts to criminalize Black dissent, reflects an attempt to erase Charlotte Uprising's resistance and the collective fight for freedom and liberation."

In the lead-up to their court date, Merriweather said they are convinced the "black identity extremist" label will affect the way they are treated within the justice system. They pointed out the attempts by North Carolina lawmakers to pass an "economic terrorism bill" following the Charlotte Uprising.

"They were trying to find ways to criminalize folks who were speaking out through the means of protest, and correlating it to the way it impacts capitalism and businesses," Merriweather said. "How the presence of quote-unquote black identity extremists keeps people from wanting to participate in capitalism when we show up in protest."

Williams pointed to recent reports regarding collusion between Russian agents and black activists in Charlotte as another example of a story meant to deflect from the message activists have been pushing from the beginning.

"For us this is all about fighting for dignity. What we've seen is this attack on black folks who are organizers, but also black people who are always already most negatively impacted by state violence through poverty or through inequities in housing and education," Williams said.

"What we're trying to do is make a distinction that what we're fighting for is dignity through black liberation, but for all people, and acknowledging that if black people don't have that then no one will."

[Editor's note: This story has been updated from the one that appeared in print, which went to print before Merriweather's Tuesday afternoon court date.]