The Plaza-Midwood staple is under attack by greedy developers 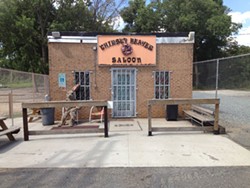 It's a tale old as Charlotte — a small, colorful, local business with dedicated patronage gobbled up by a greedy developer so he can level it, building condos in its place.

The Thirsty Beaver is an eclectic, inclusive, modern-in-attitude yet vintage-in-style bar in Plaza Midwood. Its enormous popularity defies its tiny stature. The Beaver has consistently been voted one of Charlotte's best neighborhood bars and best dive bars since it opened in 2008. It's beloved by both the community that surrounds it and the people who travel 30-plus minutes several times a week just to hang there.

This month, one man decided that it must fall.

John Hatcher of John Hatcher Realty owns a large chunk of land that contains much of Plaza Midwood's business district, including the land surrounding the Beaver. In fact, if the Thirsty Beaver weren't sitting atop its lot — which is owned by Charlotte resident George P. Salem — Hatcher could sell the entire corner at Central and Pecan avenues to a condo developer and make out with a hefty sum from this prime piece of real estate. The only problem is the Thirsty Beaver's owners don't plan to move out of his way. (Their lease is up in five years and Salem declined to answer questions for this story regarding his intentions for the land.) So Hatcher devised a scheme to force it to close.

Without warning, two weeks ago he erected a chain-link fence around the perimeter of the Beaver, blocking an emergency exit and leaving barely enough room for a single person to pass between it and the building. Presumably, the plan was to make the fire marshal deem the bar unsafe and shut it down. The icing on the cake would be for bar patrons to feel put off by the prison-like feel the fence created and stop giving the Beaver their business.

Neither of these initiatives succeeded. On Wednesday, June 19, the city ordered John Hatcher Realty to tear part of the fence down because it violated city code, which dictates it has to be 24 feet from the road. Instead of shutting the Beaver down, the fire marshal had a talk with Hatcher that I imagine went something like this (Hatcher refused to comment for this story): "Come on, dude. You're really OK with a bar full of people dying in a fire as long as it means you can get rich off condos? At least put in a freaking gate!" So Hatcher put in a gate by the back door.

As for any hopes of bar patrons feeling uncomfortable and not returning, they were likely dashed as the Beaver had a week of record sales and an outpouring of community support.

"The positive responses from the public and from customers has been overwhelming," said owner Mark Wilson. "We can't express how grateful we are to them for their continued support."

It seems the only damage Hatcher did with his fence stunt was to his own reputation in the community, which was already suffering after earlier this year, when he allowed a recently opened club on Pecan Avenue to charge patrons $5 to park in every surrounding lot, requiring customers, employees and even owners of neighboring businesses to pony up the cash to the club they had no intention of patronizing.

On the Thirsty Beaver Facebook fan page, many have said they've called John Hatcher Realty daily to express their outrage. A mile-long list of people call Hatcher greedy and immoral.

The fence still stands, and Beaver regulars have taken to decorating it with "Free the Beaver" signs and protest bras. If anything, this spectacle has added yet another layer of character to the bar and emboldened its already loyal clientele.

When I asked Wilson about speculation that he was moving the Beaver to a spot on Monroe Road, he said, "No, we actually were planning to open up something different there. We plan to stay at this location for as long as possible."

Maybe developers and greedy landowners should just move on.

The story originally incorrectly stated when the Thirsty Beaver opened. It opened in 2008.