Los Campesinos! is OK with genre label, but does its best to defy it 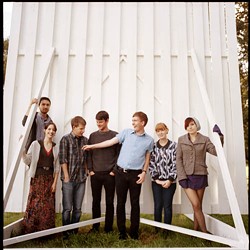 Many bands might shy away from a word that would describe them as being "excessively dainty, delicate, cute or quiant," but England's Los Campesinos! has, for the most part, embraced the genre known as "twee." It's most often used in conjunction with indie pop bands, but Los Campesinos!, no matter how much the title is used, is doing its best to break the molds of any label. After all, it's quite easy to do when you have eight band members.

Formed in 2006 in Wales, Los Campesinos! consistently performed with seven band members until earlier this year when drummer Ollie Campesinos! left the band. He was replaced by new drummer Jason Campesinos! and eighth member, Rob Campesinos!. (Note: all band members simply go by their first name with "Campesinos!" tagged on the end.)

The band released its debut, Hold On Now, Youngster..., in 2008, and quickly followed it up with the 10-song We Are Beautiful, We Are Doomed that same year. Its third release, Romance is Boring, hit stores in January of this year. The band re-recorded four songs from that album with the new members for an EP called All's Well That Ends.

"We wanted to document the different versions and seeing a different way a song might have ended up," Tom Campesinos! says by phone from his Wales home. "It was a nice way to get the new members involved. When we were writing and recording Romance is Boring, we weren't worried about how we would play it live. There are a lot of parts that weren't possible without an eighth person. We'd be able to tour more cheaply without eight people — it would also be more comfortable on the bus."

While Tom jokes that it would be a better financial decision, having so many band members enables them to get the sound they are hoping to create. The band is also aware that having too many people can cause a bit of chaos, and they are aware enough to not make things overly complex.

The band's writing process is one where Tom will create the basic structure of a song and then send it to Gareth so he can work on vocal ideas. Once the main portion has been completed, it's sent off to the other members so they can work on arrangements and filling out the details. "It's only at that part that it becomes a proper song," Tom says. "Everyone contributes in their own way, but it helps to have a starting point."

While Tom and Gareth have done the majority of writing at this point, both Neil and Jason have started to work on songs, and there is hope the next album will be more of a collaborative effort. For now, they're simply enjoying the new energy that Jason and Rob have brought in.

"I think each time someone new joins, there's been kind of a surge of excitement of playing with someone new and the new things they bring in to the band," Tom says. "Rob joining has opened up a lot of the things we can do — it means Gareth can roam the stage a bit more and be a bit of a clichéd front man."

Even though the band is just starting to settle in with the new band members, for them, the faces are familiar. "We've known all of these people for quite a long time and been friends even with the old lineup," Tom says. "It's not a massive change. This is going to be the first tour with all of us, so it should be good."

And as for that genre label? "It doesn't bother me to be called twee, but what twee means to me isn't a negative thing," Tom says. "I think some people call us that to be derogatory. At the same time, it doesn't fit our live show — it's a bit noisier and distorted. So maybe it doesn't fit after all."