Lucy: A dud by any other name | Reviews | Creative Loafing Charlotte
Switch to the mobile version of this page.

Lucy: A dud by any other name 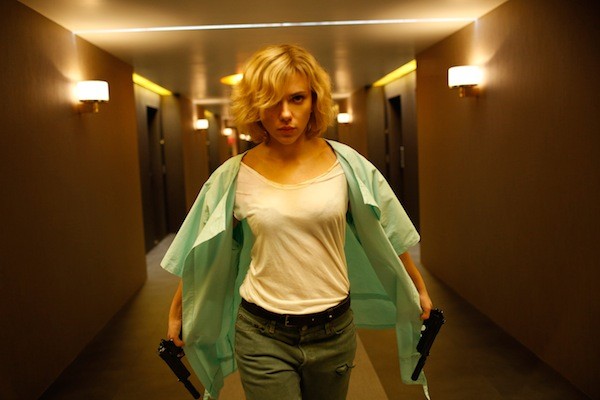 In the immortal words of Ricky Ricardo: Lucy, you got some 'splaining to do.

A valiant if ultimately futile attempt to graft a brainy mind-bender onto a traditional action film template, Luc Besson's Lucy frequently comes across as The Tree of Life as directed by Michael Bay. The result, then, is more like The Twig of Life, as the philosophical queries posited in Terrence Malick's mood piece are dumbed down into a meaningless mishmash of outmoded science and up-to-date CGI.

Scarlett Johansson has a ball as Lucy, a good-time party girl whose sleazoid of a boyfriend (Pilou Asbæk) ropes her into a crooked arrangement involving a powerful crime lord named Mr. Jang (and played by Oldboy himself, Min-sik Choi). As Mr. Jang's prisoner, Lucy is forced to function as a drug mule, with a bag of a substance known as CPH4 sewn inside her stomach. But when the bag breaks inside her, the contents seep into her bloodstream, and they end up increasing her brain power. As the kindly Professor Norman (Morgan Freeman) explains to his students in random scenes that pop up during the early portion of the film, most animals employ 2.5-5 percent of their brain, dolphins use a whopping 20 percent, Tea Party members utilize a mere 1 percent and the rest of humanity uses 10 percent. But with this valuable drug coursing through her, Lucy is heading toward a full 100-percent brain drain.

Of course, in the real world, Professor Norman would be ridiculed by his peers, stripped of his job and tossed out onto the street, since that 10-percent belief has long been debunked as nonsense. Then again, Besson probably got the idea by opting to use only 10 percent of his own noggin to make this movie, as the accomplished writer-director of The Fifth Element and La Femme Nikita doesn't seem especially interested in presenting anything particularly memorable with this concept — even Bradley Cooper's so-so Limitless, a 2011 offering with a similar plot, provided a bit more food for thought than Lucy. It also provided some dramatic tension in Cooper's plight; here, Lucy just becomes more intelligent and more invincible, and this siphons all conflict from the film. After all, even Superman could be brought down, by both kryptonite and Zack Snyder.

Johansson is excellent as the title character, and the opening scenes in which she's dragged into Mr. Jang's world are suspenseful and suggest that Besson would have fared better just making another straightforward action flick, as that's usually his forte (as a writer, he was also responsible for the kick-ass scripts for Taken and Unleashed). The picture also toys with a nugget of an intriguing idea in that time is the only true currency in our lives. Unfortunately, like everything else of interest, it gets tossed aside for a fanciful but frustrating climax featuring slithery special effects, Freeman experiencing flashbacks to Bruce Almighty's set design, and a guest appearance by one of The Tree of Life's dinosaurs.