It will someday be coined The Norbit Effect, that unfortunate instance when a popular performer has a turkey in theaters at the same time that he or she is hoping to score Oscar gold for a celebrated movie. This was the case in 2007, when Eddie Murphy was the odds-on favorite to win the Best Supporting Actor Oscar for his excellent turn in the previous year's Dreamgirls. Instead, Murphy lost the award to Little Miss Sunshine's Alan Arkin, and while possible reasons for the upset included Murphy's prickly reputation around town and Arkin's longevity in the business, another theory was floated that the Oscar season was being conducted right when Murphy's critically lambasted comedy Norbit had just opened in theaters, and why the hell would Academy members vote for anybody who would make garbage like that? 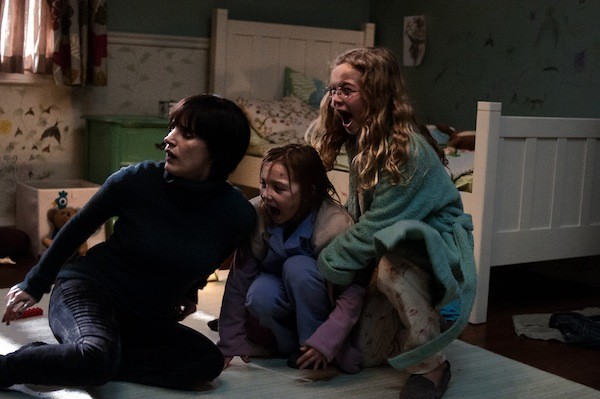 Unlike Murphy, Jessica Chastain probably doesn't need to worry. Although she's presently nominated for Best Actress for Zero Dark Thirty — and, in this wide open category, has as good a chance of winning as anybody — her new movie Mama isn't the sort of cinematic debacle that can cripple careers. If anything, her performance in this unexceptional horror fare will probably only endear her further to voters, since it presents this chameleonic actress in yet another light: Rather than a flighty Southern belle (The Help), a soft-spoken Texas housewife (The Tree of Life) or a driven CIA agent (Zero Dark Thirty), she's now playing a Goth chick, complete with jet-black cropped hair hugging her noggin and a position in a local punk band.

Mama begins with a crazed father failing in his attempt to murder his two children before turning the gun on himself (an homage to the opening of Nicolas Roeg's Walkabout?). Instead, the two girls (Megan Charpentier and Isabelle Nelisse) spend the next five years living in a cabin in the woods, with only a spectral mother figure to protect them. Once the kids are located, they're placed in the care of the deceased dad's brother (Nikolaj Coster-Waldau) and his girlfriend (Chastain). But as the children begin warming up to their surrogate parents, the malevolent Mama responds in a jealous rage, physically assaulting various adults, violently inhabiting their bodies and — better clutch your seat for this one — unleashing an army of fluttering, sputtering moths.

Guillermo del Toro has a fairly impressive resume as a director (Pan's Labyrinth, Cronos, etc.), but as an executive producer, he'll seemingly slap his name on anything short of an Adam Sander comedy. Here, he's lending his clout to help writer-director Andres Muschietti expand on his own 2008 short of the same name. That 3-minute effort, available online, sought only to provide a chill and succeeded; this 100-minute feature dilutes the primal terror with its obvious plotting, thin characterizations and heavy use of CGI. And while the child actresses are quite good, only Chastain makes an impression among the grown-ups, and that's more for our willingness to chart her career trajectory than for anything connected to her underdeveloped role. When the most memorable aspect of a movie character is her choice of T-shirts — for the record, she likes wearing one that plugs The Misfits — it's proof that everything else, from the pop psychology to the scares, will similarly remain on the surface.

Mama is not showing in any theaters in the area.