Antoni Tàpies and the high aesthetics of art 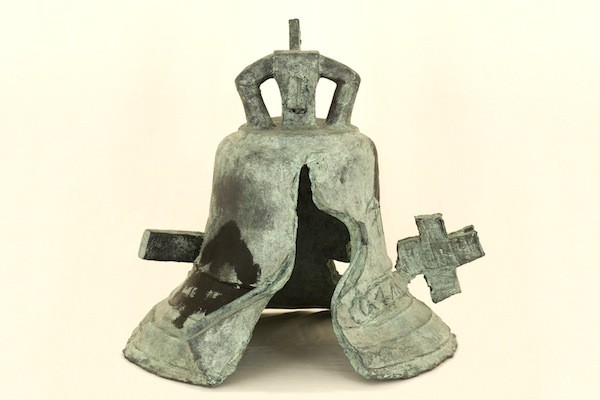 "Without the ethical consciousness, a painter is only a decorator."

Robert Motherwell's words from 1957 could also serve as the foundation for Catalan artist Antoni Tàpies' work, as evidenced by the Bechtler Museum of Modern Art's exhibition, Antoni Tàpies: Texture and Image.

Although he was well-recognized in his home country, he remains fairly unknown here. The Bechtler honors his legacy in a show that will be loved by abstract expressionist enthusiasts and politically minded folk alike. The work in the show might feel dense to most anyone else.

This one-room show is modest in size but powerful in meaning. Maple frames outlining several series of lithographs cluster on the walls, while the room's center is occupied by rectangular showcases holding prints accompanied by free verse poetry. The strongest piece, a copper bell, sits proudly on its own. Of the 23 works on display, 21 have never been shown to American audiences.

Tàpies was born in Barcelona in 1923, experiencing the Spanish Civil War as a child. Although never trained, he chose art over a potential law career, quickly establishing a presence in the underground and the anti-academic Catalunian group Blaus, who above all emphasized the subconscious. Tàpies vehemently opposed Spain's dictatorship of the 1960s and 1970s and even after his nation became a democracy again, his work retained a political angle. He felt art could transform people's consciousness.

Tàpies believed his materials reigned supreme over any composition or image they could create. Expensive Japanese hosho and other fine papers sit beneath unconventional materials, including marble, sand and dust. He also adopted a handful of symbols, of which the letter X, the number 4 and a cross appear most commonly in this show. Tàpies worked in the art informel style, a European counterpart to abstract expressionism, which embraced spontaneity and intuition.

The bronze bell is the standout piece in the room. The patina on "Campana Petita" is a light green, indicating age, and oil paint decorates it like graffiti. One can imagine the hand that sliced down its front with a saw and forcefully peeled back the edges. A bronze X hangs off the side, as if pulled away by another strong hand. These manipulations feel disrespectful and emotionally charged, like the remnants of a riot.

Elsewhere, a 1969 etching called "La Porte" looks leaden and ominous. Crisp white lines slice through textural embossing, coming toward the center from the corners. A centered dark rectangle interrupts their progression and floats out toward the viewer. 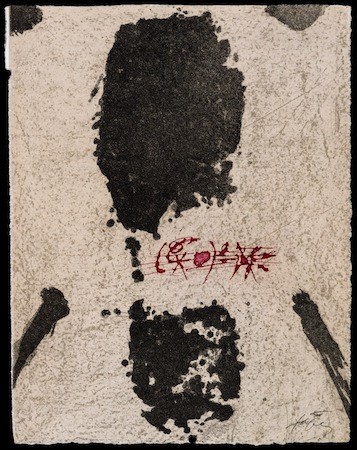 The unbound book Air (1971) fills the second case. Tàpies' lithographs accompany free verse poetry by Andre du Bouchet, and others are hung freely on an adjacent wall. Beside the poetry, they feel like illustrations, but on the wall, their importance is elevated. The viewer understands they stand up well enough by themselves.

This belief in the equal coexistence of literature and visual art is the core of "Album St. Gallen" (1965), whose 10 lithographs line a separate wall of the gallery. Highly gestural and littered with Xs, the material in each ranges from soft watercolor to dense, dark pigment. They were created during Tàpies' time in St. Gallen, a city in Switzerland that became a meeting place for great thinkers of the art informel movement.

While a visitor might not feel their consciousness transform after seeing this show, they will hopefully recognize that when a political statement is paired with the high aesthetics of fine art, it becomes much more effective. After last fall's onslaught of abrasive political ads, Charlotte should be thankful to receive a political message so well-presented.

(Antoni Tàpies: Texture and Image runs through March 18 at the Bechtler Museum of Modern Art. Details at www.bechtler.org).