TJ takes On Everything

TJ Reddy in his studio. (Photo by Christa Cammaroto)

TJ Reddy says society can become a prison — a cell forged by the pursuit of wealth and status at the expense of peace, justice and the environment. He should know, as an artist and activist he sought to transform society, and he paid the price by going to jail.

"I'm still here," says the 72-year-old painter and poet. "Whether I'm in an environment that opposes my right to equal education opportunities, or a society that holds me in contempt because of my skin hue, it hasn't stopped me. I still function as an artist, expressing my thoughts about freedom."

On June 30, the unstoppable Reddy returns to his alma mater, The University of North Carolina at Charlotte, for Everything is Everything, a retrospective of his creative life at the Projective Eye Gallery in the College of Arts & Architecture. The exhibit runs through August 22, and Reddy will be on hand to engage with the public at a reception on July 20.

It was that very commitment to engage that landed Reddy in hot water with racist authorities in the 1960s and early 1970s. At UNC Charlotte in 1965, Reddy was an exemplary student, an award-winning creative writer and associate editor of an arts magazine called Three. But he was also viewed as a troublemaker, active in the anti-war and anti-draft moment. When Reddy led demonstrations in favor of a Black Student Union and an African and Afro-American Studies Department, the stage was set for confrontation.

"We took down the American flag and ran a black one up the flagpole at UNC," Reddy says. "You would have thought we had committed the most heinous crime. We were surrounded by armed guards and there were snipers on the buildings aiming rifles at us."

The University capitulated to Reddy's demands, but his heightened profile may have made him a target of the white establishment. In 1970, Reddy was one of the Charlotte Three, a trio of black men charged with setting fire to the Lazy B Stables, and killing 14 horses, in 1968. A jury convicted all three men in 1971.

Three years later, the case began to unravel. In 1974, the Charlotte Observer reported that federal authorities, under the direction of Watergate co-conspirator Assistant Attorney General Robert Mardian, had secretly paid off two key witnesses against Reddy and the others. Public outcry about the case grew. Although state courts upheld the convictions of the Charlotte Three, the sentences were commuted by then-Governor Jim Hunt in 1978. 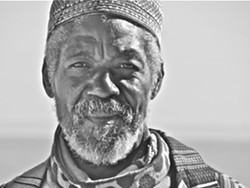 Today, Reddy views his incarceration as a piece of a broader mosaic of racial discrimination, not too far removed from slavery, which persists today.

"Slavery (made) sure that there were discrepancies between standards and practices. How can there be a bill of rights in a democracy that operates on a bill of wrongs towards people (of color)?" Reddy asks. Though progress towards equality has been made, Reddy eyes recent events like the rise of white supremacy with trepidation.

"You can't legislate away attitudes as easily as you might think," he says.

Reddy grew up in segregated Savannah, Georgia, under the care and guidance of his great-great-grandmother.

"I basically lived in a village community," Reddy says. "I grew up without modern day conveniences — no electric lights, no indoor plumbing and no telephones."

Watching his great-great-grandmother cook is one of Reddy's first memories of witnessing a creative activity. It made a lasting impression on the budding artist.

"In my paintings, you'll see references to food. I'm making a statement about healthy living and fresh, natural foods."

An avid reader from the age of three, Reddy wasn't allowed to go to Savannah's public library, which was reserved for whites. So, he went to the house of his high school principal instead.

"(Principal) Edwards lived in a big mansion-style house," Reddy says. "It was a pretty big crib, and she turned her living room into a library. I remember riding my bicycle with my basket, coming home loaded up with books."

Reddy came of age in a provincial town with racial tension, but he stresses the tightness of the black community, which nurtured his nascent creativity, and the peoples' connection with the land. His own family came from generations of farmers. He says the materials he uses in his work — paper, sand, wood shaving, feathers, fabric, and crushed shells are mixed in with his acrylic paints — are a statement about our relationship with nature. Citing pollution and global warming, Reddy maintains it's a relationship we neglect at our peril.

"We have a limited capacity to understand life giving properties, yet we think we're in control," Reddy says. This narrow view of the natural world fosters a callous disregard for life, he maintains.

Conversely, Reddy sees acts of creation as a mystical process. A feeling of practical magic — much like his great-great-grandmother's culinary legerdemain in the kitchen — permeates his paintings, whether they are focused on his travels to the Caribbean and seacoast southeast ("Havoc in Haiti," "Savannah Seas"), or his bucolic-yet-segregated upbringing ("Scenes for the Teacher, Family Portraits").

In a similar vein, archetypical figures, like illustrations from a tarot deck, populate his work: teachers, mothers and the newborn.

"When I see a child being loved and nurtured by their parents, I think it's such a beautiful thing. So in my work, you'll see scenes of progeny. It's a sign of my hope." 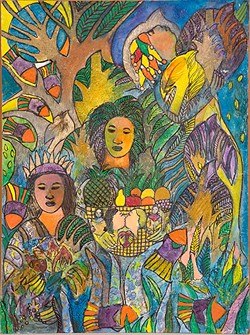 Archetypes come to the fore in the series The King, the Lover, the Warrior and the Magician. These paintings are Reddy's reaction to a tragedy. A close friend was murdered by the father of her children, who then turned the gun on himself.

"I had nightmares," says Reddy, who confesses that he devised the series as a form of therapy.

"The paintings became a way to find the noble aspects of the male character. Something that sustained instead of destroyed life."

"The king is endowed with power by the people," Reddy says. "But you will see that the king in my paintings becomes a despot, a tyrant."

Similarly, the warrior is entrusted with responsibility. As a protector, his task is to provide a sense of safety, Reddy maintains. Yet, multiple police shootings of unarmed black men illustrate a gross perversion of power.

"Like a snake eating its tail, the warrior consumes himself. The protector becomes the attacker."

In another series of paintings, Reddy further explores power run rampant amid a grotesque abrogation of responsibility. With Psychological Castration, Reddy pulls back the shroud on the notorious Tuskegee Syphilis Experiment, where from 1932 to 1972, investigators studied the progression of syphilis in rural African-American men. No attempt was made to treat the men or alleviate their suffering, and they were deliberately kept in the dark about their condition. The paintings revisit the warrior archetype, says Reddy.

"In (the paintings) the warrior psychologically castrates himself by making a power move to destroy those in need of protection," he says.

What hope there is for the male of our species resides in the final archetype: the magician. The power of magic connects us to nature and the cycle of life, Reddy believes. It's a worldview that can pull humanity away from the brink of madness. In his paintings, Reddy transforms the magician into a musician. It's no accident that the magician depicted by Reddy plays an ancient African instrument called the kalimba. Reddy also plays the 16th century import from Zimbabwe.

"Magic is endowed with those who take a sound and turn it into color, rhythm and movement," Reddy says. "They create a powerful universal language that unites us."

The same can be said of Reddy's work. As the title of his exhibition, Everything is Everything, suggests, all of creation can come together, if we can only stop to see it.

"The world is only manifest because of the connection with all of these elements that irrevocably intertwine, in a way that gives meaning to what we call life."

"Just think," says the painter, poet, musician and mage. "The very minute that someone expires, a child is taking its first breath."