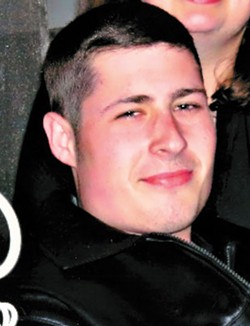 His murder, and the short sentence the killer got, appears to be striking a chord among court officials. Montognese's execution-style murder was at the center of a Creative Loafing cover story last month about murder cases being plea-bargained down or dismissed because prosecutors and the courts are underfunded, understaffed and overwhelmed.

District Attorney Peter Gilchrist made the same desperate plea to county commissioners last Tuesday that he made to the community 10 years ago. In stark terms, he painted a picture of the chaos that underfunding has led to in the court system, contrasting his office to those in Austin, TX, and Portland, OR. Austin has fewer people and less crime than Mecklenburg County does, and yet that city has more than twice the number of prosecutors.

The DA's office is so understaffed, Gilchrist said, prosecutors often don't have time to watch the surveillance footage of crimes being committed until just before a trial. New attorneys, straight out of college, must master sex abuse, assault and homicide cases, but the pay is so bad that few stay long enough to become effective. Sometimes the state provides training for them and sometimes it doesn't. The team supervisors who are supposed to manage and guide inexperienced prosecutors are so slammed with their own cases that they don't have the time to spare.

Those were just a few of the troubles Gilchrist outlined for a county committee. His speech had such an impact that Commissioner Norman Mitchell, who had lectured the media about court funding being a state responsibility, changed his tune, commenting that while he didn't want to give Gilchrist false hope, he did want to supply the DA's office with more money.

Court funding is a perennially touchy subject that's bound to get touchier as commissioners debate whether to fund the courts. Democrats now control both the county commission and the state legislature, and some are hesitant to admit a problem exists going into an election year, since they could wind up having to take the blame for it. Republicans like Mayor Pat McCrory and County Commissioner Bill James like to point the finger at the legislature, though those two haven't done much over the years in the way of a serious, sustained lobbying campaign, either.

Republican County Commissioner Jim Puckett is all over the map when it comes to the county ponying up millions to fill the gaps in the courts' budget, as was proposed by his colleague James. Puckett said it's not fair to tax county taxpayers twice to pay for a court system the state should be funding. He suggested the county should sue the state for funding the same way high poverty school systems sued 10 years ago for more funds.

Puckett placed some of the blame on State House Speaker Jim Black, a Democrat who represents Mecklenburg County.

"You would think his clout would allow him to articulate an argument for why the largest county in the state should have a sufficient number of DAs," Puckett said. Black's office did not return CL's phone call.

Puckett also suggested commissioners should take some of the blame. Last year, when Republicans controlled the commission, they asked County Manager Harry Jones to be more active in Raleigh on issues such as court funding, Puckett said. What's more, the subject often comes up in private conversations commissioners have with legislators, he said, but suggested maybe that wasn't enough.

"We should have probably pushed harder for them to be active about it," said Puckett. "It hasn't been on the legislative agenda and maybe it should be."

Some commissioners, such as Democrat Dumont Clark, were more defensive.

"When you butt your head against a wall 10 to 15 times and you don't get any response [from the legislature], there is a certain degree of frustration and a sense of futility sets in," he said. "And frankly the idea that somehow, if we put something on our legislative agenda, people are going to turn around and do something, is a pretty naive view of the world."

Like Puckett, Clark said he's not sure if he wants to double-tax county residents to pay for the courts, but that he's willing to be open-minded about it.

State Senator Dan Clodfelter, a Democrat from Mecklenburg County, said the efforts he and other legislators from Mecklenburg County have made to improve the system and get more funding haven't gotten media attention. The court system is underfunded across the state, he said, and part of the problem is that while individual groups -- such as judges and trial attorneys -- lobby for various interests within the system, there is no well-funded group looking out for the courts as a whole. Until Charlotte's business elites get behind efforts to increase funding, the issue won't go anywhere, said Clodfelter.

County Commissioner Valerie Woodard believes the $900,000 the county already spends to subsidize the court system every year is enough.

"I just don't think we need to put more money than we are already doing, because we are financing it now," said Woodard. "I don't see where there is a problem with what [the district attorney] is doing now. If there were a public outcry, that would be different, but I'm not hearing that."