Menus warm up for fall

Around town, dishes get richer with meals that stick to your ribs 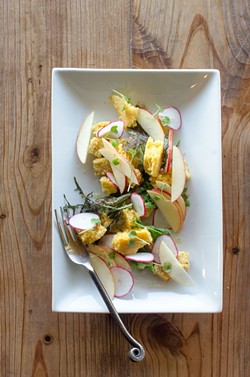 It's sweater weather. Pumpkin season. A time for hearty soups, stews and red wine. Basically, cover everything with cheese and breadcrumbs and bake it!

After a hot, humid (and largely lime-less) summer, comfort food season has arrived. For many of us, that means Southern (or at least Southern-inspired) cuisine. Game meats; gravies; richer, more complex side dishes; root vegetables — the fall lineup is positively inspiring. This is the season to make spaghetti sauce, crock pot stews (if you're into the original slow food movement) and casseroles.

But eating out this time of year can be just as comforting. Take advantage of autumn's abundance at one of these restaurants.

Savor Café and Catering on West Morehead Street is known for its Southern menu. Chicken and dumplings, banana pudding and a concoction intriguingly called "Bettie Lou's Coca-Cola Cake" are regulars. But fall is really when Savor really gets to shine.

"For those of us in our kitchen — and I think plenty of people in the restaurant business — fall is our favorite time of year," says Lori Pearson, Savor's owner. "It's really all about celebrating food."

Savor will do just that by adding short ribs and braised pork cheeks to the menu. Pearson says the café offered pork cheeks as a recent special and paired it with mashed potatoes and — get ready for it — fried Brussels sprouts.

Over in Plaza Midwood, upscale vegetarian restaurant Fern, Flavors from the Garden is preparing a fall menu that will have the most committed carnivore thinking of switching teams.

Pecan paté will be one of the new appetizers, says Fern general manager Susan Walley. Pecans, scallions, thyme, oregano and tamari are pureed into a spread and served with homemade pickles. "What I love about this is how rich and earthy the paté becomes," she says. "It pairs wonderfully with the briny tang of the pickles. The actual veggie we pickle will change constantly. We've tried it so far with red onion, rainbow chard and radishes."

Fern's fall panzanella — a vegan dish — has what Walley calls "the spirit of the traditional Italian bread salad," but one that's custom-made for cooler weather, with cornbread, sautéed mustard greens, fresh apple and radish slices all tossed in an apple-thyme vinaigrette.

Butternut squash risotto is Fern chef Matthew Martin's favorite dish this season. Arborio rice risotto with pureed butternut squash folded in is mixed with mustard greens, cranberries and toasted pumpkin seeds. It's like Thanksgiving (minus the turkey) in a bowl. "To me, it's the perfect fall dish — hearty, creamy and earthy," says Walley.

Ingredients like sweet potato leaves from Feba Farm in Shelby and hyper-local mushrooms from Plaza Midwood will also star.

For a menu that changes even more seasonally, head to Lumiere, the swanky, old-school French spot in Myers Park. Co-owner and executive chef Tom Condron works with whatever is freshest each day. He's also looking forward to highlighting fall's bounty: "Lumiere will be offering a lot of contemporary French menu items with very modern twists," Condron says. "Dishes like coq au vin will be on the menu; however, it will be cooked in a different style, allowing the poulet rouge [red chicken] to stand out and not be drowned by red wine.

"Game will have a bigger part on the menu as well," Condron continues, "not only on the main courses, but in the starters." Expect pheasant, duck, antelope, quail and bison. "Seafood will be loup de mer [otherwise known as sea bass], Arctic char, Dover sole, Maine lobster, local snapper, black bass and grouper."

Pumpkin spice coffee lovers, rejoice. NoDa's Crepe Cellar has created a seasonal pumpkin-tini. A pumpkin beer reduction is blended with Covington sweet potato vodka and Jack Ruby bitters and served in a glass rimmed with cinnamon sugar. That's nearly everything you need to make it through winter — except for a bulky sweater and a roaring fire in a stone fireplace.

Eat up, y'all. We've got to prepare for the winter hibernation. Summer's heat (and staid salads) will be back before you know it.