The show must go on for Charlotte women in theater

Sisters are doing it for themselves 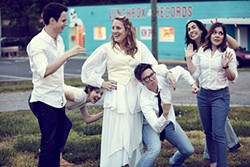 Lorraine Hansberry, one of a handful of legendary American female playwrights, said, "The thing that makes you exceptional, if you are at all, is inevitably that which must also make you lonely."

She probably was lonely. As not just a woman playwright — but an African-American playwright — she had few peers in the 1950s and '60s. The playwrights' club is dominated by men: Oscar Wilde, Tennessee Williams, Arthur Miller, Neil Simon, David Mamet. With all due respect to the celebrated author of A Raisin in the Sun, her quote just doesn't apply to Charlotte's leading ladies. These stars of the stage are calling the shots behind the curtain and playing the supporting cast to each other's theatrical triumphs.

There are opportunities for local women in theater. "Both Theatre Charlotte and Actors Theatre have checks and balances ... in place to ensure diversity and gender equality," said Paige Johnston Thomas, an actress, director and casting director.

"Ron Law [Theatre Charlotte's executive director] has been very vocal about promoting equality," Thomas said. And female directors have dominated the company's 2015/16 season; Thomas was among them.

But these women aren't going to wait for suitable opportunities. They're creating those opportunities themselves. And in some unlikely places.

Sheila Snow Proctor and her all-women Chickspeare troupe began settling that score in 1998. The nomadic group first began performing at the now-closed Johnson Beer Brewing Co. Their shows often include audience participation, so a brewery — where audiences can drink away any inhibitions — is a good setting. When Johnson Beer closed, Proctor asked Suzie Ford if she and her husband, Todd, would consider hosting the chicks at their NoDa Brewing Company. The arrangement has benefited both groups. "Performing in an alternative space forces you to let go of traditional mind sets," Proctor said. "... being in a brewery forces us to do work that engages an audience because they are literally right there a foot in front of us on all sides."

Suzie Ford thinks beer and Bard go perfectly well together. "Art takes shape in many different forms, and we consider beer to be an art form," Ford said.

The Fords don't charge Chickspeare a rental fee. They take their payment, as it were, in whatever beer sales they make during the show. "I consider this another part of our community responsibility," Ford said.

And while the goal is to introduce newcomers to Shakespeare (Proctor said they try to get people who rarely attend theater to attend Chickspeare), providing good roles for women is at the heart of what they do.

Nicia Carla founded PaperHouse Theatre, which she describes as a feminist theater company, in 2012. Inherent in her company's mission is a wayfaring spirit. It reads, in part, "We will perform where there is an audience."

"Finding an audience is a challenge," she said. "Once we connect with an audience, it's helpful to return to that location."

The company struck gold last summer when they staged Oscar Wilde's A Woman of No Importance at FROCK Shop in Plaza Midwood. Audiences responded and Creative Loafing named it one of the best area comedies of 2015. The play is set at a refined country estate, and the audience was welcomed as if arriving for a weekend sojourn.

"At FROCK Shop, we have a space that acts as another character," Carla said of the inspired setting.

Caroline Cook-Frers, who owns the vintage clothing and homewares shop, agrees there's something special about the space. It's been the site of art exhibitions, Sunday suppers and weddings. "This old house has a way of bringing magical collaborations our way," she said.

Carla doesn't just appreciate the space FROCK Shop offers. She appreciates the partnership she has with its owner. "In my experience, women look after each other," she said. "Caroline has been an advisor, a support, an empowerer. She knows what it is to be a woman with an idea, and how to get from an idea to reality."

Performing in an alternative space "changes the relationship with the audience, sets up a different dynamic that allows for a closer connection," Carla said. "Smaller, non-traditional spaces help us connect on a human scale."

And offering strong roles for women is always part of the goal. "As women in theater, we have to be our own advocates," she said. "The theatre sisterhood is growing. We are reaching out to one another more and more."

A blank canvas for theater

Tonya Bludsworth, actress/director/producer/casting director, doesn't bellyache about a lack of roles for women. She just writes them herself. Yes, the quintuple threat is also a playwright.

She and her partners at Donna Scott Productions write juicy roles for women, hire women as directors and actors and generally just help a sister out. They accomplished the latter recently almost by accident, when the location they had planned for Shiloh Rules fell through. They were introduced to Cindy Connelly of the Charlotte Art League (CAL) and have gone on to become CAL's resident theater company.

Bludsworth loves the collaborative aspect of working with other women artists. "We get an incredibly creative rehearsal space, and CAL gets exposure and new patrons."

Connelly said Scott and crew are the "best thing to happen to the Charlotte Art League."

People have walked into the South End gallery, which has been around for more than 40 years, for a play and wondered why they'd never been there before. The gallery/studio space has seen an uptick in social media followers, attendance and — what really counts — sales. During The Book of Liz, a comedy by Amy and David Sedaris, the gallery sold 92 pieces of art.

Since Shiloh Rules opened at CAL last March, the gallery has been the site of several weddings, corporate training classes and a fashion show. "The exposure is priceless," Connelly said.

And exposure is ultimately what these women want for themselves and each other.

Donna Scott talks a lot about creating opportunity for women. That's why she formed her production company. It's why there are more women-led theater companies (TAPROOT Ensemble and Three Bone Theatre, for instance) popping up. These women work within the existing infrastructure. But they're eager for even more opportunity.

"Chip [Decker of Actor's Theatre] and Ron [Law] really try to cultivate women directors," said Scott. "One way to get women involved at that level is to have them apprentice as assistant directors. But that position doesn't typically pay."

It's all the more reason for women to help other women.

"There's a willingness to share not only the opportunities but also the workload," said Glynnis O'Donoghue of Donna Scott Productions. "We know we're stronger together."

And it's working. "Women are ruling the independent theater scene," Paige Johnston Thomas said. "Instead of waiting for the checks, balances and committees to either hire them or produce their work, these women are forging their own creative path."

Lorraine Hansberry didn't have it entirely right. When you're surrounded by sisters, being exceptional isn't lonely. It's empowering.

Much Ado About Nothing. Paperhouse Theatre’s next production. $30. May 26-June 11. Frock Shop, 901 Central Ave. paperhousetheatre.com.

“Non-traditional Spaces and Partnerships: How to Make Them Work for You.” Donna Scott Productions will host a discussion on women in business and the arts. Free. July 25, 6:30 p.m.– 8 p.m. Charlotte Art League, 1517 Camden Road. donnascottproductions.com.