Kicking it with Hooligans 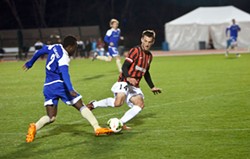 The pink and orange horizon has dimmed, and the cold doesn't take its time creeping in. The home team at UNC Charlotte's Transamerica Stadium is losing 3-2 with only minutes left to play. More than 2,000 of the stadium's 4,000 seats are occupied, but the open sections are all echoing the reverberations of the pounding feet not far away. The mounting energy is matched by the rhythm of drums and the melody of what sounds like a replica horn of Gondor bellowing out after every big play.

An imitation smoke grenade (fireworks probably purchased in South Carolina, ironically enough) flares up for the second time as the clock creeps over the 90-minute mark. Jack's Militia scarves quickly cover the faces of dozens of supporters standing in the white cloud, protecting them from the dissipating smoke, but their eyes are all fixed on the match.

The Charlotte Independence are surging forward, desperate to get a goal back from their new rivals from Charleston, and if anything else is going to happen, it's going to happen right now.

Time and time again, exhausted from quick sprints up the wing and pressured transitions through the midfield, Independence attacks are forced toward the corners, cleared or sent wide. After five long minutes of extra time, the final whistle blows. Charlotte's new soccer franchise has lost its first competitive match. The players go shake hands with the visitors from below the state line and make their way over to the Militia's cheering section to show their gratitude.

The stands start to clear out, and it's over. Several players, most noticeably Patrick Slogic at 6'6" and 185 pounds, stand staring at the empty seats that were just filled with hopeful spectators.

"It was really an honor to have all the fans out here," Slogic says, with his hands on his hips, his dilated eyes still facing the stands. "It was just great to finally get to start the season. It's a disappointing result but as we get along with the season hopefully we see more positive momentum."

On March 27, Slogic and the rest of Charlotte's new soccer franchise finally came face to face with the club's most active support group, Jack's Militia, for the first time. With renovations still underway at the team's home, American Legion Memorial Stadium, the venue was less than optimal. The whole affair practically had the awkward uncertainty of a blind date.

The fans weren't certain what to expect (the team finalizing its roster the morning of the match), but Slogic set the foundation with a solid performance in the center of the defense, despite his team allowing three goals. He was shown a yellow card at the 88-minute mark for a dangerous slide tackle and immediately an imposing "Boo" echoed across the college campus. In the heat of the moment, that must have felt good, having his critic booed mercilessly by strangers on his behalf. If he could even hear them, of course.

Forward Caleb Calvert, 18, who came on to help bolster the attack for the final 23 minutes, says players on the field have no choice but to tune out the distractions. There's too much going on at once to focus on anything beyond the sidelines, but they can't quite ignore the energy the fans are giving off, either.

"The fans played a huge role in [the last minute press]. They definitely helped us go forward and created a massive amount of momentum for us," Calvert says.

Toward the end of the match, it may have only been fatigue, but the Independence, who at times dominated the game, started to look less composed. Maybe the roaring steel bleachers struck a couple of nerves. But that's the kind of enthusiasm you want to see from the supporters early on, especially from a small turnout.

Before the game, the members of Jack's Militia hosted a pre-game party in the back room of the Flying Saucer. They spent that time organizing, signing mailing lists and rehearsing chants. You could hear them singing from across the packed restaurant as soon as you walked in.

Once the stadium is ready for gameplay, the Independence is hoping for an average attendance between 6,000 to 8,000. Militia organizers plan on marching there from their pre-game headquarters at Courtyard Hooligans for every home game, where there will be a craft beer garden waiting for them near the Militia's standing section. (Thanks to UNC Charlotte policy, the first game was a sober one.)

Maybe there were first-game jitters, maybe some people were put off by the venue, but, despite all the speed bumps, it felt like there was a seed of new subculture in Charlotte sprouting that evening. It may not catch on right away, but there's something inspired about the passion that these die-hard soccer fans bring to the field.