Uber, Lyft and Yellow Cab ­— how do they compare?

Calling all cars! We crunch the numbers 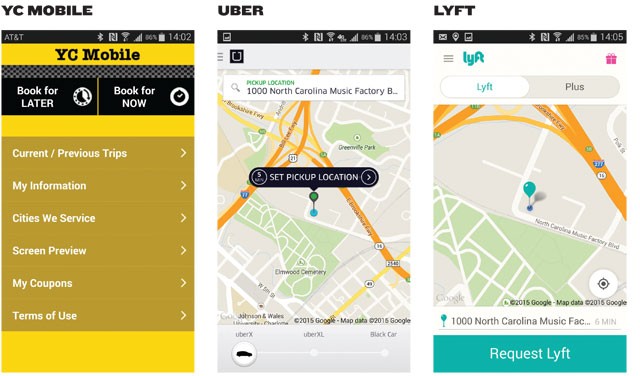 After the Hornets' crushing loss to the Pistons earlier this month, some self-medication was in order, so I set my course for the bar. I had to walk a few blocks to get to my Uber, but was surprised to find my driver waiting with snacks and refreshments in a fresh Hyundai Equus. Heated rear leather seats, wood grain interior, leg room for days. It was only two miles from Time Warner Cable Arena to Thomas Street Tavern, but it was a classy two miles. And my fare? Only $6.50 — and that was during the dreaded peak hour pricing.

Because of the growing popularity of rideshares, we took to the streets to get a clearer idea of what Uber, Lyft and Yellow Cab have to offer. We selected these three companies based on a couple of key similarities: they all have their own apps designed to make their service user-friendly and, by our unofficial research, they're the most popular ways to get around on an alcohol-filled night in Charlotte. For our experiment, we examined varying factors, including price, time, distance and overall experience, among other things.

In short, the evidence — data and anecdotal — doesn't conclude that one company is better than the rest. (See our slick chart for more details.) Rather, we found that while Uber and Lyft are generally cheaper and often provide a more comfortable atmosphere, Yellow Cabs are usually right where you'd expect to find them and frequently got us to our destination quicker. 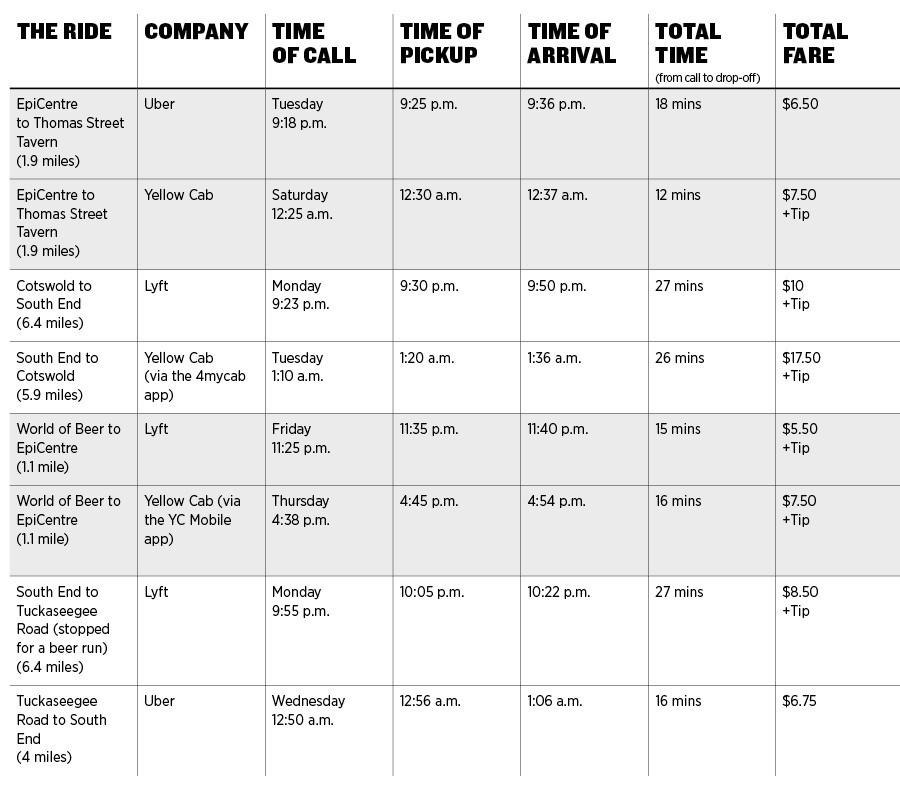 But in order to become better informed riders, we had to do more than crunch numbers; we also had to get a better understanding of the rideshare vs. cab debate.

At the heart of the rideshare appeal is the affordability factor. Because companies like Uber, Lyft and their new competitor, Sidecar are able to bypass the regulatory fees cabs are responsible for (think applications, classes and annual fees), they can offer the same, or even better, services at a potentially lower rate.

Charlotte-Mecklenburg Police Department's Passenger Vehicles for Hire is in charge of the licensing, inspection, and operation of all passenger vehicles for hire. We asked Kirkham Young, PVH manager, to explain why rideshares aren't regulated the same way taxis are. He said that the distinction is in accordance with state law, and that all regulations regarding taxis are there for public safety.

"NCGS 160A-304. That's why there's a difference. There's been a difference since it was passed," Young said.

In fact, the statute Young referred us to goes on to clarify that legislation as written does not authorize a city to require licensing or regulation on a business offering a "digital dispatching service" if it "does not own or operate the vehicles for hire in the city."

Since public safety is a big concern, we talked to Lyft's public policy communications manager Chelsea Wilson, who's based in San Francisco, about what they're doing to make rides safer and more efficient.

Wilson says Lyft drivers have to undergo a series of background checks and a vehicle inspection by a Lyft mentor before shadowing them on the job in order to receive their pink moustache (now found glowing in the dash instead of attached to the front bumper).

Uber also has its own screening process, though we were unable to reach a representative from Uber to elaborate. Reports of problems are few and far between, but there have been some high-profile ones. In New Delhi, there was an alleged rape involving an Uber driver; in Chicago this past December, Maxime Fohounhedo was charged with sexual assault and criminal sexual abuse on a passenger; and in Boston, 46-year-old Alejandro Done was charged with rape, kidnapping and other charges for allegedly posing as a driver and taking advantage of one unlucky passenger's intoxication.

DESPITE THE CONTROVERSIES, rideshares are still expanding at ridiculous rates. Uber alone reported adding about 20,000 drivers per month in 2014, and it's pretty obvious why: According to Uber, the median wage for an UberX (the most basic) driver working at least 40 hours a week in New York City is over $90,000 a year, before expenses. In San Francisco, the exact same gig can gross a little over $74,000.

The market in Charlotte may not boast numbers as high as those, but rideshare drivers will tell you they're making pretty good money. Although Uber doesn't want riders to tip, 80 percent of every fare goes straight into the driver's pocket. One man told us that if he drove all day, he could make upwards of $500.

Waldu Tekle, a driver for Yellow Cab who says he used to drive for Uber as well, offered a different opinion. "I used Uber for three months and couldn't pay my bills," he said as we crossed over 277 on South Boulevard in his iconic yellow sedan. "The price should be competitive. I don't expect the same price, but at least competitive. Drivers are a part of society too. We need to pay our bills too."

Having worked in the service industry myself, Tekle's comment really stayed with me. Receiving a service without paying the person who provided it properly is just bad business.

Because rideshares were founded more on the principle of carpooling efficiency rather than hustling rides for profit, part-time drivers may have more success financially. It's making life difficult for some full-time cab drivers, but I haven't heard any part-time drivers complaining, and certainly no objections from consumers.

"We're a tech company that has created this online platform, and then we have independent contractors who access that to move people around," Uber spokesman Taylor Bennett told Raleigh's News & Observer. "We have changed an ecosystem that has been stagnant and unchanged for decades. When you disrupt the status quo, there's certainly going to be pushback."

Rideshare drivers aren't considered employees and as a result aren't required to work specific hours. So, operating on the concept of supply and demand, there's a peak-hour pricing function to get drivers back on the road. Those fees can get really steep for riders.

Daisy Fuller, 23, says she couldn't get a cab home on Halloween night and consented on the Uber app to pay a price increase seven times the normal rate. Lyft, on the other hand, caps its peak hour pricing at two times the normal rate. Michael Riley, 32, says his Uber home on New Year's Eve set him back $86, a steep hike up from the usual $10 to $15. Game days — hello, CIAA basketball tournament revelers! — and other holidays can see similar pricing.

The surge in fees is one point of contention from riders, but Uber and Lyft both notify you upfront of any price increase.

Yellow Cab, however, does not increase its prices during peak hours and is working to make its services easier to access. Being a regular Uber user myself, I got my first taste of Yellow Cab's 4mycab app during this experiment. (I also quickly learned why the company recently released a brand-new app, YCMobile, altogether. We made sure to try both. Spoiler alert: 4mycab was a letdown, and YCMobile was only a mild improvement.)

Technically, it was Wednesday morning — 12:30 a.m. on a cold, rainy Wednesday morning — and time to go home. I'd hailed a Yellow Cab about 15 minutes earlier using the 4mycab app on the west side of Uptown off Tuckaseegee, and hadn't gotten confirmation that anyone was on the way. I called to check the status.

"I just sent a message to the dispatcher. If you're not picked up in the next 20 to 25 minutes, call back immediately, OK?" the operator said reassuringly.

The 4mycab app is supposed to show your driver on the map, similar to the way Uber and Lyft work. But instead of offering me a wait time, I was stuck on the "locating your cab" page. After 30 minutes, the frustration and biting cold prompted me to grab my phone, cancel my potential cab and get an Uber.

I didn't want to accept failure and continued my experiment later that evening when I decided to give Yellow Cab another shot. My pickup destination this time was South End. I used the 4mycab app again, and only waited 10 minutes this time.

At 1:20 a.m., our driver rolled up on the empty curb out front of the bar we were at. He already had two no-shows that evening, so it was understandable that he wasn't in the best mood. But he was one of the nicest gentlemen I met during my research. I told him about my previous call into Yellow Cab, and he gave us his personal card and offered to pick us up in the future, even on short notice. He got us to our destination quicker than our Lyft on the same route, and he even did a couple of magic tricks along the way. (No b.s. — the guy knew magic).

IF RIDESHARES AREN'T strictly regulated like cabs, what's saving a rider from a potentially awful, creepy, stinky and all-around gross experience? An almost tyrannical rating system that has both Uber and Lyft drivers minding their P's and Q's, that's what.

If an Uber or Lyft driver's overall rating drops too far below 4.7 out of 5 stars, they can expect to have their account disabled. But drivers can also rate their riders and aren't obligated to pick anybody up that they don't want to. So don't be surprised if taking advantage of their hospitality, or just being an ass, gets you black-balled yourself.

One Lyft driver, Mike, a retired truck driver, rang in all 5 stars when I found out he had the cab of his big, blue F-150 decked out with Christmas lights and candy canes for the holiday, and went all out for Valentine's Day, too.

"Just a little something for the customers to get 'em in the spirit," he said while adjusting the GPS on his dash. "It gives a little extra, you know, enjoyment for the ride."

And for many people, that's what it comes down to: an enjoyable ride. Which is why rideshare companies are so popular. They're saving people money, and, above all else, challenging the industry to evolve. Clap your hands Repubs, this is the free market at work. 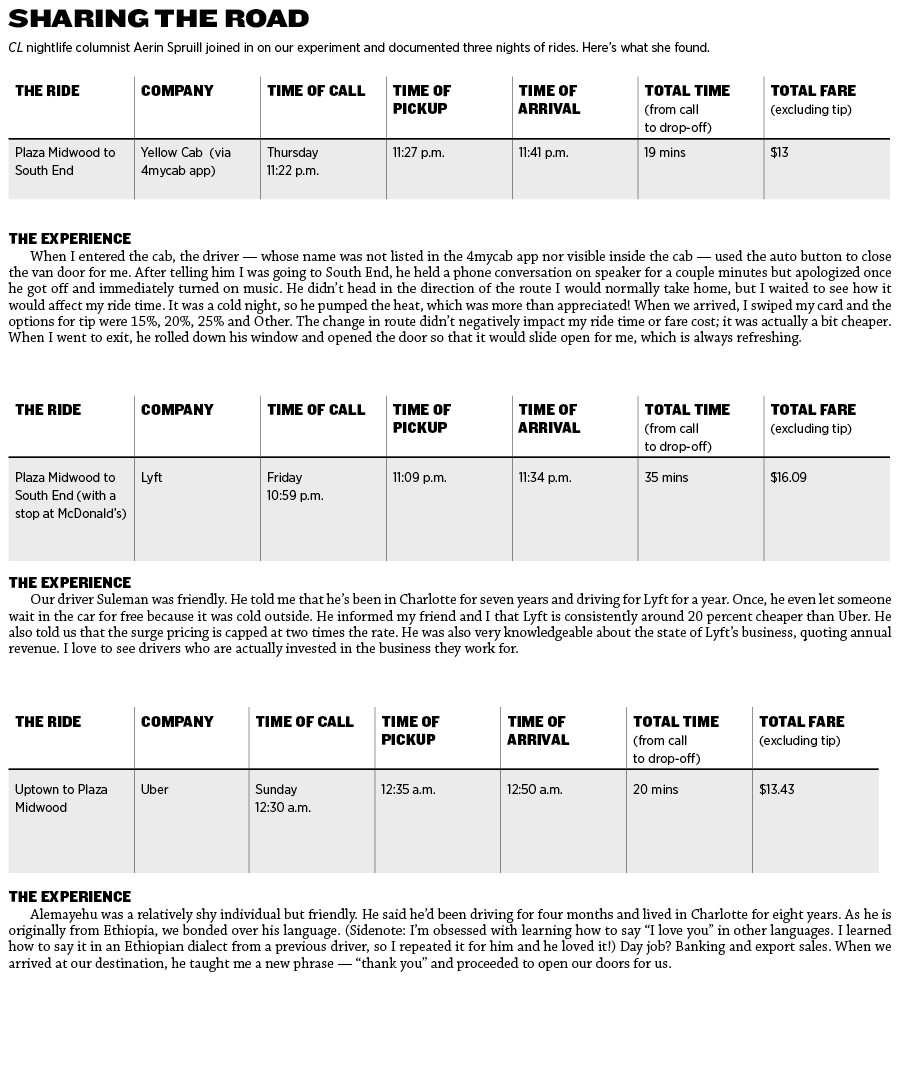