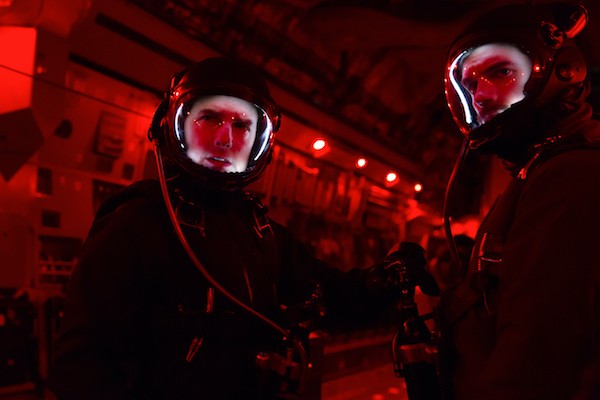 When it comes to the Mission: Impossible film franchise, there’s the John Woo installment and then there’s all the rest. That is to say, there’s Mission: Impossible II, the sole bad entry in the series, and then there are the other chapters, all of which have been remarkably consistent in delivering high-caliber thrills. This designation includes the sixth and latest picture, Mission: Impossible — Fallout, and it’s hardly a knock to state that it’s not quite as compelling as all the other non-Woo endeavors. It may not ascend to any new heights, but it also won’t send viewers home disappointed.

Tom Cruise has spent this series playing Superman rather than Everyman, but here he takes it a step further: His character of Impossible Mission Force agent Ethan Hunt is now basically God, lording over his domain, bestowing his blessings on the worshipful mortals around him, and remaining indestructible no matter how hard the Satanic emissaries in his midst try to bring him down. In this entry, Hunt has his hands full trying to retrieve three plutonium cores that were stolen from right under his nose (hey, even God makes mistakes). Negotiations to recover the cores involve releasing master anarchist Solomon Lane (Sean Harris, returning from Mission: Impossible — Rogue Nation) from imprisonment, a proposition that leaves Hunt queasy. Also thrown into the mix is special agent August Walker (Henry Cavill), ordered by CIA head Erica Sloane (Angela Bassett) to tag along with Hunt and his trusted accomplices Luther Stickell (Ving Rhames) and Benji Dunn (Simon Pegg). Clearly, Walker has a hidden agenda, but Hunt is equally as preoccupied with the reemergence of Ilsa Faust (Rebecca Ferguson), returning to the espionage fold in order to take out Lane.

Folks not familiar with the M:I series will need a scorecard to keep track of the various characters, but then again, would anybody be foolish enough to join an existing franchise for its sixth installation? Just know that Alec Baldwin returns as IMF Secretary Alan Hunley, Jeremy Renner does not return as IMF agent William Brandt (hey, remember when Renner was briefly being groomed as the new M:I face until Cruise apparently decided he wasn’t ready to put himself out to pasture?), and The Crown’s Vanessa Kirby joins the ensemble as an ebullient black marketer known as the White Widow.

Even as far back as Brian De Palma’s original film from 1996, many of the muscular action set-pieces showcased in this series defy belief, and the ones featured in this latest picture dutifully follow suit. Yet the exhilaration they promote provides most of them with a free pass — the same can’t always be said for the vehicular chases, and this movie offers back-to-back dashes that eventually prove wearying. Then there’s the case of Cavill — his character of the mysterious August Walker is intriguing, but he remains such a stiff performer that some of the life is drained from the scenes in which he’s required to convey ambiguity.

Ultimately, though, these are minor quibbles when compared to the energy and exuberance flowing through the majority of the picture. Don’t expect any crippling fallout to greet the release of Mission: Impossible — Fallout; on the contrary, it’s safe to assume that a seventh installment is already making its way to the drawing board. Now whether Cruise will remain in the Hunt remains to be seen.