By Chris Parker, Samir Shukla & Co
click to flip through (2) 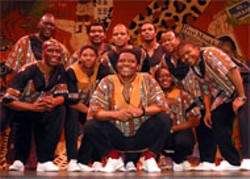 
Duran Duran - If the new wave 80s proved anything, it was that fucked-up hairdo's were no impediment when it came to getting laid : provided you were a musician, of course, especially if you happened to be one of the pretty boys in the British group so fond of boxer Roberto Duran they named their band after him : twice. This stuff hasn't aged well, but then most Durannies just want a hit of nostalgia anyway. Who are we to deny them? See story in this issue for more juicy details. With Stimulator. Verizon Wireless Amphitheatre (Schacht)


Ladysmith Black Mambazo - This South African vocal group, which has been performing for more than three decades, got its big break in America when Paul Simon tapped the Mams to sing on his huge-selling Graceland album in 1986. Success hasn't changed the group's mesmerizing, ethereal, a cappella sound. Founder Joseph Shabalala still fronts the group he founded in 1974, and though Apartheid may have officially ended, life in South Africa hasn't become much easier for most of the population, and hardship is the cornerstone of the group's poignant lyrical content, sung mostly in Zulu. But you don't have to know a damn word of Zulu to feel this music. Neighborhood Theatre (Schacht)
Martha's Trouble / Laura Blackley - Martha's Trouble is pretty, easy-going low-fat folk-pop, which is to say it won't kill you, but it might anaesthetize your taste buds. Ashville's Laura Blackley has more sinew to her frame, pulled taut by her raw, gritty swamp-folk, and energized by Michelle Malone's production on Blackley's latest album, Liquid Courage. The Evening Muse (Parker)


Bellyfull CD Release - This mostly instrumental groove-rock band understands jazz. Its newest live recording, Postmodern Ghetto, has layered bass and keys playing hide-and-seek with the guitar and percussion, which gives Bellyfull its signature sound. The keyboardist can be subtle or lay it on thick when necessary. Neighborhood Theatre (Shukla)
Danny The Wildchild - A child prodigy of the decks, Danny The Wildchild began beat-matching and scratching at the age of nine, then got introduced to the Chicago rave scene in the early 90s. He developed a style that blends his early influences of hip-hop and drum'n'bass, uniting them with his artistry on the turntables. Liquid Lounge (Parker)


Hellfighters / Physics of Meaning / The Rachel Nevadas - Travis Morrison, former frontman of DC post-punk popsters Dismemberment Plan, has assembled a new band and is heading in the studio for his second Hellfighters album. Physics of Meaning is the guise of Daniel Hart, a onetime Polyphonic Spree member, and is an acoustic supergroup of Triangle area performers. Virginia's Rachel Nevadas are as crunchy and tasty as peanut brittle. Tremont Music Hall (Parker)
Spottiswoode & His Enemies/The Hellsayers - Prior to their last appearance at the Muse, venue co-owner Joe Kuhlmann sent out one of his rare e-mails urging folks not to miss this talented New York-based band. A few days after Spottiswoode and Co. had blown away a weekend crowd with their Holy Roller cabaret/rock show/tent revival, Kuhlman sent out a brief follow-up to those who hadn't heeded his advice, which read something like this: "You fucked up." Life offers few second chances, folks. . . The talented Asheville band Wayne Robbins & the Hellsayers is still riding the wave of kudos for their 2004 debut The Lonesome Sea. There's a definite Neil Young influence, equal parts Crazy Horse sonic feedback and raw, open-veined solo acoustic, but you can draw parallels with My Morning Jacket and early Wilco, too. The Evening Muse (Schacht)


Bear Claw - There must be something in all that Chicago wind that produces such exhilarating and freewheeling outfits. This trio : two bassists and a drummer : lay down a confounding, genre-free sound that follows, at least in spirit, the noisy freewheeling rock of the Jesus Lizard. Still, Bear Claw's agenda is quite original. With Labia Minor. The Room (Shukla)
John Mellencamp / John Fogerty - You can hear it in the river, from the heartland where the Ohio River empties into the Mississippi to the fertile crescent where the blues meet the roots. From Fogerty's musical Yoknapatawpha County with Creedence to Mellencamp's rootsy born-to-run rebels and strugglers, these guys have weaved country and rock into pop for years. Both men have released swampy, blues-folk albums in the past few years, their hit-making days presumably behind them. Verizon Wireless Amphitheatre (Parker)
Stoll Vaughan - He writes and plays songs that embrace a timeless ambience. His debut recording, Hold on Through Sleep and Dreams, is a well-written, country-folk affair. Vaughan has scored the perfect opening gig with veteran roots-rockers John Mellencamp and John Fogerty. Verizon (Shukla)