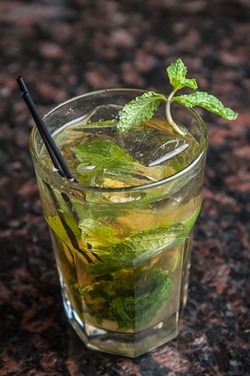 Then restaurateur and Dominican native Dalton Espaillat bought a failing Mexican restaurant and turned it into the successful Three Amigos in 2010 he successfully coaxed, psychologically if not technically, the boundaries of Plaza Midwood to encompass his restaurant. Now, he is trying to extend the NoDa mindset to "annex" Nano's Dominican Cuisine, a restaurant he bought last spring on North Tryon. It's a smart move.

Espaillat says Nano's, established in 2007, is the oldest Dominican eatery in Charlotte, but, in fact, it may have opened about the same time as another popular Dominican spot on South Boulevard, Punta Cana. Nano's, however, never developed the latter's fervent following. Espaillat is determined to change the popularity of his native cuisine — and libations — in the NoDa neighborhood.

To do this, Espaillat (who owns two Three Amigos — the second is in Huntersville; Sabor Latin Street Grill in Elizabeth and one soon to open in Weddington; and a new tortilleria and taqueria emporium adjacent to the Three Amigos on Central Avenue) has hired executive chef Tony Moran, a Johnson & Wales University graduate, to oversee his kitchens.

Nano's snug interior has been remodeled and now is home to a more ambitious Dominican eatery. Like a host of other successful restaurateurs in town, Espaillat has mastered the art of the small dining room. When you enter, it is hard not to notice the wall of Dominican rum behind the bar. Espaillat says it's the largest Dominican rum list in Charlotte, and Dominican rums are among the best in the world. The high-end Ron Barceló Imperial is the latest addition to a list that includes Ron Barceló añejo and Brugal añejo. Aged-in-wood Dominican rums, like the slightly smoky, super-smooth Imperial, are imbibed straight up (and scream for a Montecristo No. 2 cigar).

Nano's menu is calibrated to take on the flavors of Espaillat's island homeland. Not surprisingly, plantains, rice and beans — the Dominican triad — are found in abundance. Mofongo, the ever-popular Dominican comfort dish, has its own section on the menu. For the uninitiated, mofongo is a hearty mix of fried plantains and garlic with the consistency of day-old mashed potatoes.

The best of the mofongos have an unadorned, primary quality to them. The best is a dish with plantains, cooked to point of tenderness, then bathed in a pool of New-World-styled tomato sauce laced with a handful of plump shrimp.

It helps, of course, if you like island food: sautéed sweet (maduros) or fried (tostones) plantains, white rice with black beans, yellow rice with red beans, white rice with red beans — well, you get the picture. The kitchen is more or less perfect in terms of technique and the quality of ingredients. The roasted pulled pork with a hint of oregano and the crackly bite-sized bone-in chicken prove to be classics of the island comfort food genre.

Nano's menu yields other treats as well. The Dominican burger, first appearing on the late-night menu at sibling restaurant Three Amigos, is a ramped up patty oozing with sauce and scattered with cabbage, onions and tomatoes while yaroa is French fries buried under seasoned ground beef, melted cheese, ketchup and mayonnaise. The empanadas on the starter list have a faintly sweet fried dough flavor that complements the tangy shredded chicken interior. The quipe, though, which is actually deep-fried overgrown Lebanese kibbeh, was a bit too crispy on several occasions.

Nano's service, although relentlessly upbeat, can be less informed than you would want, but then its huge entrees are under 10 bucks. At that price, you have to admit, ordering mistakes are negligible. And besides, they've got the rum.