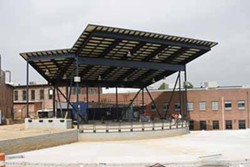 Offering new venues, both large and small, to national, regional and local acts can only help the music scene as a whole. "Charlotte has never been known as a 'music town,'" Thomas said. "We're going to do our best to change that."

The N.C. Music Factory, which opened in 2006, is currently comprised of roughly 300,000 square feet of existing buildings -- a former textile factory -- on 35 acres of property on Seaboard Street on the northeast side of Uptown Charlotte. ARK Group president Noah Lazes said future plans for the property, which will be known as the Uptown Village, will expand the space to 2 million square feet, including 1,500 residential units and space for anything from retail or a corporate campus to an aquarium or baseball stadium.

"What's unique about Charlotte is that it doesn't have a Soho -- a true stroll district that combines offices with food, entertainment and residential," Lazes said. "The first residential units will go on sale as soon as the market is good again. This is the biggest tract of contiguous property inside the Inner Loop that has development opportunity. It's a 10-year plan, but it could happen faster whenever a company decides to move in."

Along with the two music venues, other new businesses are scheduled to open at the Music Factory in the coming months and years. "Wet Willie's Daiquiri Bar will follow in late summer or early fall," Thomas said. "Butter, a high-end lounge from Manhattan, will open in October; and Crobar, a large dance club with locations in Chicago, Miami and Buenos Aires, is shooting for an opening toward the end of the year. A wine bar, an Irish Pub, an upscale Asian/sushi sake lounge and a two-story brew pub will also open in late 2009; 2010 will bring many more pubs, clubs and restaurants as we continue to develop the property." He added that every food and beverage location on the property of the N.C. Music Factory will have a deck or patio.

On a recent walk-through, Thomas noted that the deck at Wet Willie's partially faces the concession area of the amphitheater. While the music can be heard, patrons will not be able to see the stage. The patio at Crobar will not be open until after the end of amphitheater concerts on show days.

Thomas added that Wet Willie's and some of the other smaller venues set to open will be featuring local and regional music. In addition, there are currently 30 band rehearsal rooms at the N.C. Music Factory, which is also home to a variety of businesses, including the Garden & Gun Club and the Creative Loafing offices.

While some people may see the N.C. Music Factory as another version of the Epicentre in Uptown, the inclusion of the amphitheater and Fillmore help to set it apart, and the addition of the other components of the Uptown Village will ensure there are few similarities. "The Epicentre, the pubs on Fifth and so many Uptown locations are a vital part of our success. We as a group need to succeed so that we can draw regionally," Lazes said. "People don't typically go to the same club two nights in a row, so I'm supportive of everything else because it helps to raise the bar and get better quality in the city."

Lazes, who helped to put on City Fest in Uptown beginning more than 15 years ago, hopes similar, smaller music festivals will be a regular occurrance in the Uptown Village as permanent stages and bathrooms will eliminate the need for a good bit of festival production costs.

"We're beginning to draw from regional markets for things like NASCAR and the NFL and NBA, but we haven't drawn regionally for entertainment," Lazes said. "People have driven to Atlanta for entertainment for a long time. Now, we're getting close to the tipping point where people will look to Charlotte to hang out here and see what's happening."