New Gallery of Modern Art has big plans for 2012 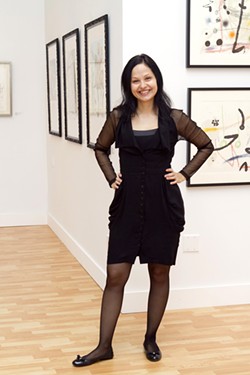 When New Gallery of Modern Art had its soft opening in August, it announced an outsized mission of exhibiting modern masters, international contemporary artists and accomplished artists from the region.

Although the breadth of New Gallery's offerings may sound daunting, "where it all comes together is the quality of the work — it will all be always museum-quality, critically acclaimed artists, whether they're regional or international," says Gallery Director Irina Toshkova.

In its first few months of operation, this small gallery, located on The Green just steps away from the Levine Center for the Arts, has already made good on its promise. The inaugural exhibition in September, Butterfly World, featured tasteful work by the flashy Damien Hirst and Hunt Slonem. This was followed by On Tigers and Putti, lush, dramatic paintings inspired by Central European churches by Charlotte's Maja Godlewska. Up now is Modern Masters: Paris & Beyond, which features work by Picasso, Miro, Chagall, Dali, Giacometti, Léger and Bonnard.

If you're wondering how a young gallery director is able to show the likes of Picasso and Hirst in little bitty Charlotte, here's at least part of your answer: New Gallery has sister locations in Boston, Palm Beach and New York, yielding a web of relationships that gives it access to so much blue-chip art. It also creates potential opportunities for Toshkova to promote Charlotte-region artists to a broader audience — for example, Godlewska's work has been shown in Boston since September.

Born and raised in Sofia, Bulgaria, Toshkova came to the U.S. in 2002 to attend Salem College, from which she graduated in 2006 with a degree in art history and arts management. While at Salem, she began interning at Joie Lassiter Gallery. She eventually rose to the position of gallery director at Lassiter and earned an MPA in arts administration at UNC Charlotte.

The regional artists Toshkova represents — Shaun Cassidy, Hoss Haley, Maja Godlewska, Marek Ranis, and Joe Walters — were affiliated with Lassiter Gallery, which closed in 2010. "I've been working with them for five or six years and personally love their work," she says. "And all of it is very compatible with the work of the world-renowned artists the gallery shows."

After Modern Masters comes down, the next show will feature environmental artists Del Geist and Patricia Leighton, whose projects and exhibitions span the globe. They will be in residence at the McColl Center for Visual Art this spring and will work with sculpture students at UNC Charlotte on a CATS light rail commission that will involve gathering stone from local quarries. Although the remainder of 2012 has not been finalized, Toshkova is looking at possible exhibitions by gallery artists Cassidy, Haley, and MacArthur Fellow Elizabeth Turk.

The gallery also has an educational component that it is realizing in part via cooperation with local institutions. With the Mint Museum, it has already co-sponsored a lecture by Slonem. It is also planning an event with the Contemporaries, an affiliate group of McColl Center for Visual Arts, and is hoping to partner with the Bechtler Museum of Modern Art in 2012.

Toshkova may speak with excitement about recent record-breaking sales at international auction houses, but she is adamant that the art comes first, regardless of who has produced it. "With our established artists, I do advise buyers on the investment potential of the work, but I would never tell someone to buy a Damien Hirst or a Picasso solely because of its investment value. They need to love it."C